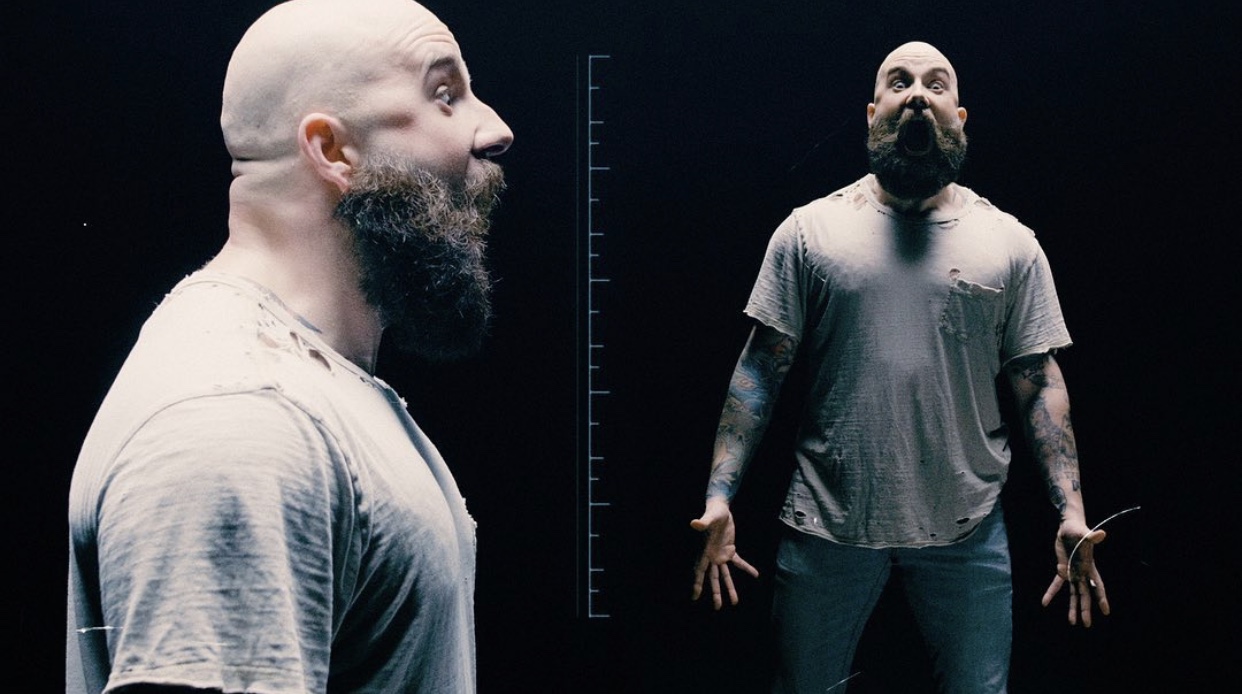 Jake Luhrs Wants to Help You

August Burns Red released their eighth album, 'Guardians,' earlier this month when the rest of the world came to a halt. And amidst an enveloping and oppressive anxiety and uncertainty, Jake Luhrs has learned to thrive. We talk to Luhrs about the new world, the new album, but, most importantly, how to get help and stay grounded when every day looks exactly like the last.

That’s Jake Luhrs in that photo, and he’s screaming, which is kind of his job. At least, a healthy portion of it. He answers phone calls and writes music and watches hockey, but you’re probably most familiar with him in some version of that pose: screaming at a microphone. He is the vocalist for metalcore cornerstones August Burns Red, taking the job as the third in said position, dutifully accepting in early 2006 before their second album, Messengers, was released.

Now, they’ve just released their eighth studio album, and it couldn’t have been more timely. The 11-track record is certainly brimming with the hard hits and heaviness anyone would expect of the Pennsylvania metalcore legends – it’s a beautiful piece of art in all elements where measure could be calculated – but what makes it an imperative cultural inclusion right now is the lyrical support it exudes; it’s not about them; it’s about how they can support you and how we can support each other. Quite possibly the most topical subject in the zeitgeist of today.

If you’d like to read an interview with August Burns Red drummer Matt Greiner about the album proper, read the Guardians companion piece here on HM »

So we talked to him about that. The day before the album dropped and after the world had been more or less quarantined for two weeks, Luhrs explained that the compassionate message it contains is the reason the band decided to move forward with the release even amidst the global COVID-19 crisis. “Guardians is about unity, community, love, and breaking free,” he said.

Quarantining is hard for a frontman that’s used to touring the world, something the band has done consistently for almost 15 years. He and the band have seized the moment to find ways to use the album as leverage to extend unity and community in new ways, to reach out and help and support those shook in ways future generations may (hopefully) never have to experience. A recent study distributed in Singapore’s Academy of Medicine found that about 54% of respondents rated the psychological impact of the outbreak as moderate or severe with 29% reporting the same level of intensity in anxiety.

When this is all over and we survive this, it doesn’t matter where you go in the world. You could go to Paris and it won’t matter if you speak French, you’ve all lived through this and had the same feelings. There won’t be anyone anywhere that hasn’t.

It’s in these desperate moments where Luhrs thrives. As the frontman for a popular band, he would meet with fans after every show, and, after every show, he would hear story after story of domestic abuse and PTSD from being at war and suicidal thoughts and self-harm and extreme isolation from anxiety. Those stories resulted in crushing mental health epidemics, awfully similar to those experienced by today’s society in the wake of job loss, an economy like no generation has seen on earth, perpetual sickness. Back then, he ultimately decided to double down on his efforts and founded the mental health nonprofit HeartSupport in 2011 and has been going full force on the project ever since.

“We’re going about 100 miles an hour over here right now,” he told me. Considering that Luhrs’ non-profit is largely dedicated to mental health support, he and his staff are working hard to engage those who are in need and reach over a half million people across all of their platforms. They hold daily livestreams on Twitch to keep people company: creative encouragement, guest appearances like Telle Smith of The Word Alive, and even Instagram Live fitness sessions with HeartSupport project manager Taylor Palmby to help boost your endorphins.

As someone who struggles with anxiety and clinical depression myself, I’ve personally felt my chest tighten with anxiety as a new world arrives. Luhrs and I discussed how it’s great to see so many people in a helping role in such a time of need, and, amid the constant onslaught of hyper information, Newspeak, and misinformation, Luhrs said something that I hadn’t heard yet: “When this is all over and we survive this, it doesn’t matter where you go in the world. You could go to Paris and it won’t matter if you speak French, you’ve all lived through this and had the same feelings. There won’t be anyone anywhere that hasn’t.”

That statement resonates with me on a level of humanism that so many stark realities have revealed as of late; this moment in time is a globally shared experience. Meaning? We are not alone. Considering that societal deviations tend to bring out the best (and worst) in people, I asked Luhrs what the best thing he’s personally experienced is in all this. His response was simple: “Say hi to me.” The rural area where he lives in Pennsylvania used to be, well, rural. As with most rural places, it can be isolated. Luhrs now has people he’s never talked to before going out of their way to stop and say hi to him as he shovels mulch from his truck into his yard. “They jokingly say, ‘Oh, hey, it looks like you’re having a lot of fun!’ Those short conversations are connection and those small gestures mean a lot.”

Luhrs has been creating connection in other ways, too, reaching out in new ways stay in touch with fans (when he’s not playing with his french bulldogs, working around his house, or, well, on a world tour to support the album). In stumbling upon a first reaction video of the new ABR single “Defender,” he thought it would be fun to reciprocate the favor for the band, True Shot, and react to one of their songs. The fan response to this was unexpectedly great, and he’s since done others (like for the song “Worldwide Suicide” by In Heart’s Wake).

But anyone who has followed Luhrs on social media would expect that, with all this extra time, he’s also probably engaged his passion for fitness while he self isolates. (Of course, you’d be right.) Currently, he is working with Fearless Records to release a fitness program that only leverages body weight (to avoid needing weights or equipment while people are home). Naturally, the adrenaline-inducing hits of ABRare also leveraged.

No one has had an easy time dealing with the gravity of what is happening around us, and no one is sure how it will affect humanity long term. Luhrs is clear that social distancing can exacerbate existing issues like depression and isolation. “The last song on the album, ‘The Three Fountains,'” Luhrs said when asked about when I asked what song on Guardians he would suggest to anyone who needs some encouragement. He highlighted that, in particular, it has a line about seeing things from a different perspective. “Look at the goodness. You can still communicate with others, you can still love your neighbor. Instead of letting the fear and anxieties consume us, we can shift our perspective and see the good around us.”

Jake Luhrs was posted on April 24, 2020 for HM Magazine and authored by Danielle Martin.