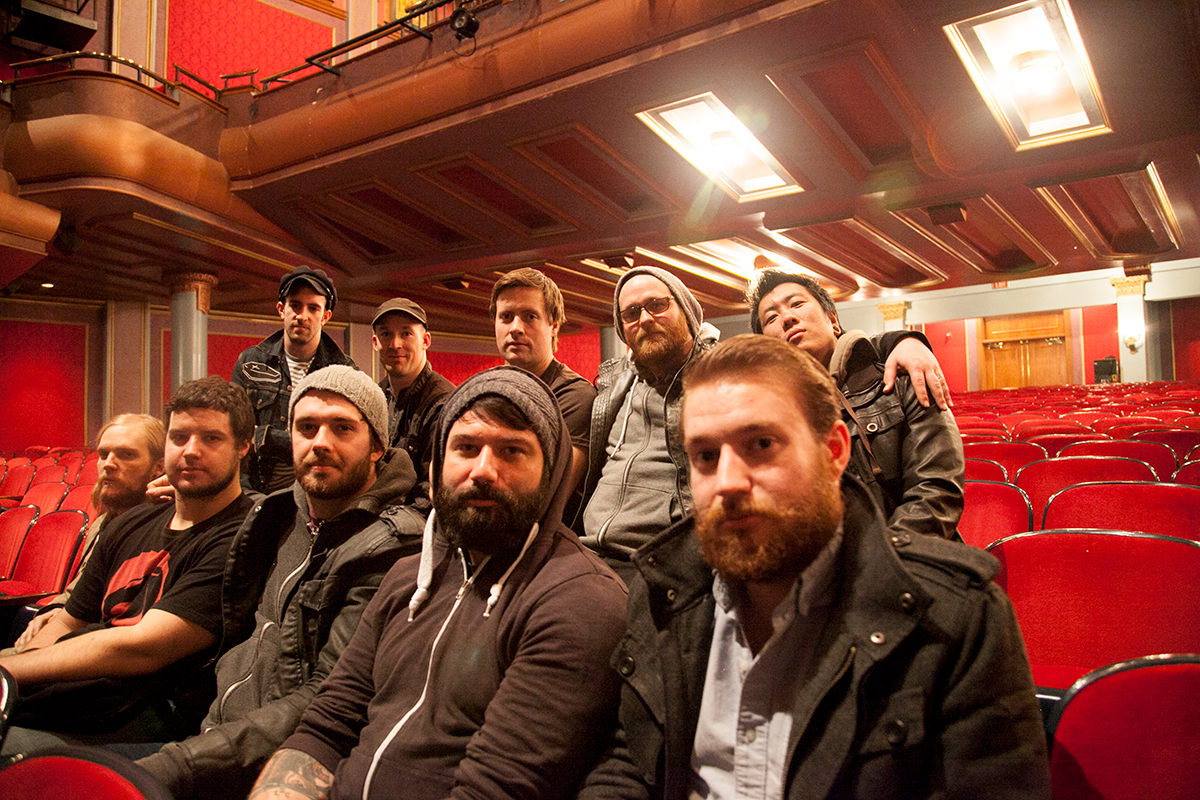 The Future Return of Haste the Day

They weathered a number of storms to last for as long as they could, but, as they say, all good things must come to an end. Or do they?

Heavy music is a cutthroat business. Every other day a new sub-genre trends. Bands constantly shift their sound to maintain relevance, alienating old fans as they gain new ones. Not many heavy bands make it past the two-album mark, let alone write five of them. Even more rare is the idea that a band with two defined eras — with only one member shared between them — can maintain and even grow their success throughout their career.

Indianapolis’ Haste the Day is a band that defied those odds.

Nine years ago, the first era of Haste the Day ended with the departure of original vocalist Jimmy Ryan. Other members of the initial lineup continued on for a couple more years, but new vocalist Stephen Keech took the band in a decidedly different direction.

This past January, a photo was posted on various social media outlets of a set list of songs off of the first two Haste the Day albums — the original lineup — with the description “2014.”

It proved to be the set list for May 2, 2014, the original lineup of Haste the Day will be onstage in Indianapolis for the 10th anniversary of their debut album, Burning Bridges. We caught up with bassist (and the only member of the band for its entirety) Mike Murphy and asked him about Haste the Day’s career, from their humble beginnings to their incredibly successful end, and what we can expect from this reunion.

What have you guys been up to the last few years?
(Laughs) Oh man. It’s crazy it’s been three years since Haste the Day officially broke up. I’ve been working for FedEx delivering. Pretty much a month after our last show, I picked it up randomly from a friend. I’ve stuck with it, keeps me in pretty good shape, I guess (laughs). I got married a few months ago and bought a house. I’m just living a normal life, which is strange.

Brennan (Chaulk, guitar) and Devin (Chaulk, drums) work for Angie’s List. Jason (Barnes, guitar) works for some Internet marketing company or something. Jimmy (Ryan, vocals), he drives a forklift — like a man. He also bikes like a madman. Thirty miles a day, running 10 miles a day. He’s pretty dedicated. Devin is the only one with kids, but we all pretty much just have normal jobs. And we’re all in Indianapolis again, for the first time in a while. That made this reunion show kind of happen.

The reunion: why now? Why just three years after the band broke up, and six years after the original lineup disbanded? Why not wait another five or 10 years?
The other guys have been wanting to get together and just jam for a while. I really wasn’t ready for it. I hadn’t really decompressed yet. I needed time away from playing — time away from even thinking about playing. My brain needed a rest. They’d text me once a year saying, “Well, what do you think about maybe getting together and doing a show now?” I’d be like, “Nah, not really into it right now.”

Probably because you’re the only member who was in Haste The Day from start to finish, right?
I was. It was time for me to take a break. But March of this year is the 10th anniversary of the release our first album, Burning Bridges, so that kind of pushed me over the edge to want to do something. We didn’t want to wait too long, I don’t know if people would even care about Haste the Day five years from now — I mean I don’t know if they even care now (laughs) — so now just felt like the right time to do it.

How has the response been so far to the idea of you guys getting back together?
It’s been awesome. When we sat down in my basement and talked about it and decided that it was time, we put together a set list, took a picture of it, posted it on Facebook with nothing but the caption “2014.” It was totally awesome. Kids were freaking out, we were just reading the comments and laughing. The response has been great. People are stoked, and we’re stoked.

At first it was a one-off show in Indianapolis, but later you guys added another in Mexico. Why did you guys decide to add another show?
Obviously having not played in years, we kind of needed a warm-up show. Not to downplay the show in Mexico at all — that show will be awesome — we just didn’t want the first time we were back onstage headbanging to be in our hometown. We need to shake some of the rust off, get a feel for what it’s like to have a stage presence and headbang and not look like a bunch of awkward old fat guys. I don’t want the first time I’m head-banging again to be in front of my wife and my boss (laughs).

What’s it been like getting back in the practice room with the original lineup? Has there been a spark of that early Haste the Day magic at all?
It’s funny, because there’s such a different dynamic between the two eras of Haste the Day. We just kind of picked up right where we left off. Musically it wasn’t as bad as I thought it would be, we all still kind of had it a little bit.

When we started Haste the Day, I was the young, immature guy — always screwing around. But by the end of the band, I was the old professional guy. It’s kind of fun being the younger, more immature one in the band again. It’s fun and right where we left off.

Elaborate on the shift in dynamic between the two eras of the band.
It definitely feels more like home and more like family. The last lineup of Haste the Day was amazing, too, and they are definitely some of my best friends, but this original lineup is like real family. It’s weird, at practice I feel like I’m in high school again. I started this band when I was in high school and I feel like it’s Friday night after school and we’re practicing in Brennan’s garage. You know, Devin was my youth pastor, and its just funny how this brings me back to all of that. It feels like we’ve been transported to 10 years ago.

Speaking of that picking up where you left off, that re-ignited spark — is this just a one-off thing for fun or do you think we’ll hear some new music?
I really don’t know. I think its just going to be these shows and maybe some other spot dates if the opportunities present themselves. But the difference is that when we started this band, when you’re in high school, you can just drop everything and go wherever it takes you. Devin has kids, we all have normal jobs — we can’t always just get off work at the same times, you know what I mean. So I don’t really think we’re thinking, “We’re back together,” we’re just taking this opportunity to play together again.

Are we going to see any cameos from later-era Haste the Day members or music at either of these reunion shows?
We might have something in the works. (He then takes on a deep, scary voice.) But I cannot say.

Hey, I thought I’d try (laughs). As someone who was in the band from its inception over 10 years ago, a band that moved quickly from an underground sensation to a very successful band with a lot of records and big tours under their belts, how have you seen the music industry (specifically the Christian music industry) change in that time? Was there a seismic shift?
Three years ago on our final tour, the Christian music scene was obviously much bigger than when we started. I’m super disconnected from the music scene right now — so I can’t totally answer that question.

Looking back to where we started, back then, it was a passionate niche. We were playing for our peers. As the years went on and the crowds got bigger, we started playing to folks that were quite a bit younger than us, and I guess it lost some of its “magic” to me. The way the word was passed in the underground scene back when we started, the word of mouth, there was just a certain level of passion in that. It didn’t matter if you were playing for five kids, you gave it everything you had. It was just something that very few people experienced, and growth was slow and organic and natural. As a band starting in that, we experienced that organic growth, and I think it was really good for the band to slowly grow like that.

Now, you can just post on social media and you’ve got a band. You might have only ever played one show, but you’re trying to get signed and get on these big tours. It just seems like a really forced way to do it. And I think that if you don’t get out there and play shows for five kids for a couple years, you know, put your time in and refine your craft — you really gotta think about why you’re doing it. That breeds a passion for it. That was the vibe of the scene a decade ago when we started this.

On our first tour, we played this living room in Louisiana somewhere. It was maybe ten feet by ten feet. I remember sitting on the couch watching the Simpsons, eating a PB&J before we played (laughs). It was awkward, but awesome. Turns out that Cody from As Cities Burn was at that show, and he bought an EP. He told us about that later. Those shows matter to the people that are there, and I remember that show. I don’t remember every awesome show with 400 people as much as I do those character-building shows.

As we wrapped up our interview and got ready to hang up, Mike interjected.

Oh, I have one more great memory to talk about. I remember being in the studio in Little Rock, Arkansas recording Burning Bridges. We were completely broke. We stayed at a cheap motel and would raid the continental breakfast every morning — stocking up on muffins and everything to be able to eat throughout the day — and even then we would try and scrounge up change to get something off the Taco Bell dollar menu.

Living Sacrifice is from Little Rock, we met them when we played a couple shows there. While we were there recording, Living Sacrifice bassist Arthur Green caught wind of how broke we were, felt bad and bought $70 worth of groceries for each of us. That was such an amazing thing for him to do — and they were one of those bands we totally idolized. For him to do that for us while recording our first record made a huge impact on us. So Arthur, if you’re reading this, I love you, man!”

Haste the Day was posted on April 16, 2014 for HM Magazine and authored by Collin Simula.