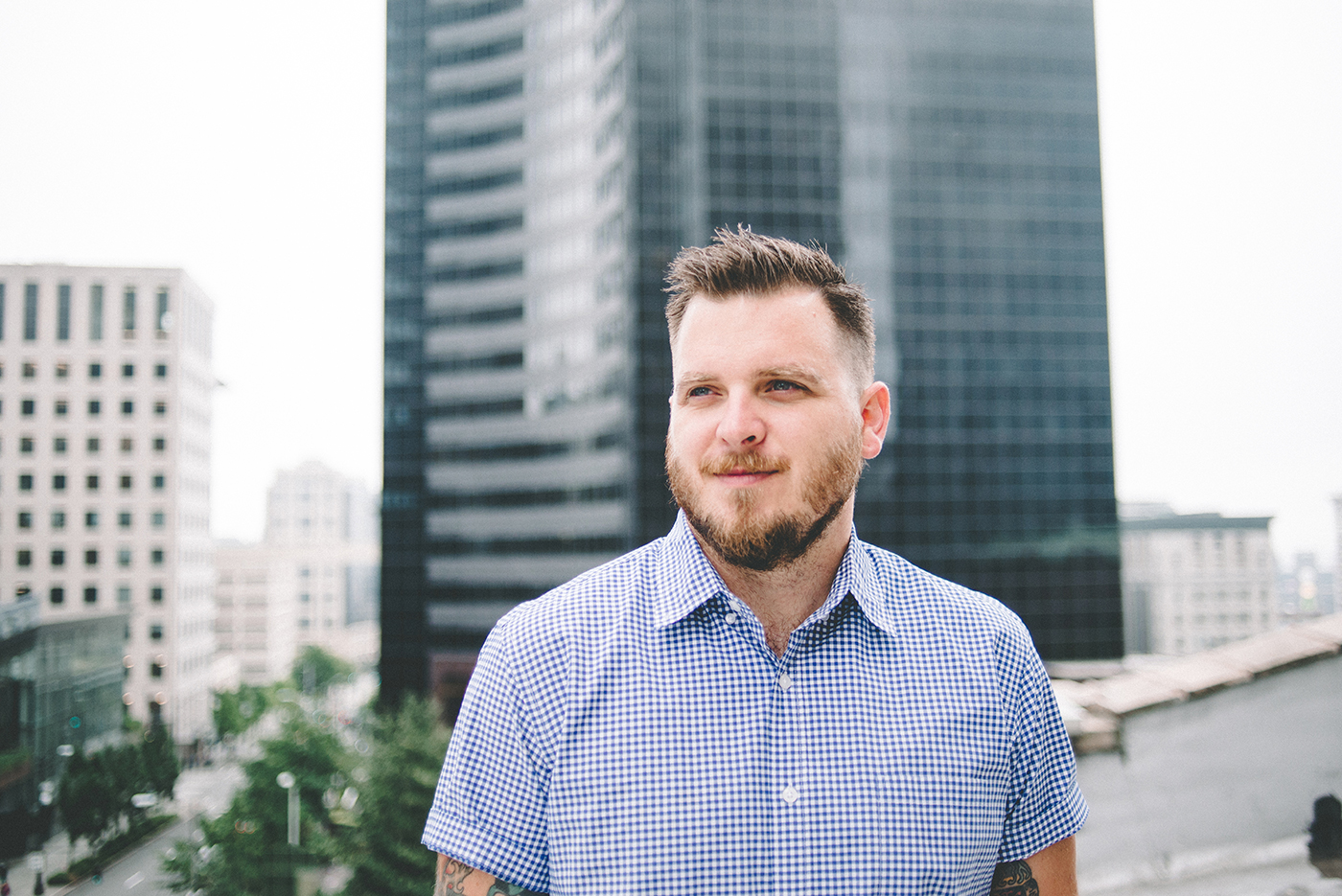 The Sound of Satisfaction

It ought to be said upfront that The Water and the Blood is not exactly a solo album from former Thrice frontman Dustin Kensrue. It’s not exactly a follow-up to his 2007 solo album Please Come Home, either. Instead, it is a collection of worship songs written by Kensrue for corporate worship.

More exactly, the project is Kensrue in the exercise of his role as Worship Pastor of Mars Hill Church Bellevue.

“Most of the songs deal with the truth that Jesus alone is our satisfaction,” Kensrue says. Thus, the album is titled The Water and the Blood, which is a phrase out of the famous 18th century hymn “Rock of Ages” – a hymn reconfigured as the second song of the album. More importantly, the title recalls the moment immediately following Jesus’ death, when a Roman soldier pierced Jesus’ side and water and blood flowed from the wound (John 19: 33-35). So, the water and the blood represent the satisfaction Jesus accomplished in his death.

“Jesus alone provides satisfaction,” Kensrue is keen to repeat. In repeating this assertion as a Mars Hill pastor and on the songs of The Water and the Blood, Kensrue is preaching an old doctrine of the Christian Church. Although variously stated throughout Christian history, the doctrine of satisfaction holds that humans have incurred a debt due to their sin and that Jesus satisfies this debt in his death. Kensrue certainly preaches this doctrine in his worship songs, hence, the bloody part of the title.

The song that epitomizes this theme is the track “Suffering Servant.” It begins with a foreboding piano theme, as Kensrue begins to tell the story of the suffering servant by sticking as close to the words of Isaiah 52 and 53 as aesthetic allows. The song itself moves from piano piece to thundering rock anthem as Kensrue depicts the transformation of this lowly servant to victorious king – all of this to tell the harrowing story of how Jesus’s suffering and death “has satisfied” the debt of sin.

The words of Isaiah that largely fill this song are highly important for Kensrue.

“I really love that passage,” he says. “It is a prophecy of what Jesus would come to do. It’s almost as clear of a gospel presentation as anything you find in the New Testament because of how it talks about what Jesus’ satisfaction accomplished.”

The use of Scripture in “Suffering Servant” also epitomizes Kensrue’s approach to lyrics on The Water and the Blood and as worship pastor.

While the Scripture forms and focuses Kensrue’s lyrics in an explicit way on The Water and the Blood, his lyrics have long been scripturally rooted – albeit in more implicit ways. Take, for instance, “For Miles” on Vheissu when Kensrue quotes John 15:13 in singing, “There’s no greater love than that one shed his blood for his friends.” Or take the song “In Exile” on Thrice’s Beggars, wherein Kensrue more or less quotes 1 Corinthians 13:12 as he sings, “All I’ve seen is just a glimmer in a shadowy mirror / but I know / one day I’ll see face to face.” There is also “Blinded,” on Major/Minor, where Kensrue depicts – using biblical imagery – what he is now apt to call the experience of knowing “unmerited grace.” For those with ears to hear, Thrice lyrics are rife with Scripture.

The song that is arguably the first “single” of The Water and the Blood, “It’s Not Enough,” is a song written while Thrice was still active. It stands as somewhat of an outlier on the album. Lyrically, the song is more akin to the aforementioned Thrice songs. Scriptural language and imagery is discernible, but in a more implicit way. Just as fans familiar with biblical verse can hear familiar passages interspersed among Thrice’s eight albums, so will readers of the Bible recognize some familiar phrases on “It’s Not Enough.” (Phrases like “everything beneath the sun” clue the listener to Ecclesiastes.) Yet, for the unaware, “It’s Not Enough” is simply a song of desperation that is iterated in many corners of critical culture.
Even more, “It’s Not Enough” challenges the conventions of traditional worship music more than any other song on the album. Instead of leading people to moments of corporate praise or plainly teaching some tenet of faith (as the rest of the songs do), “It’s Not Enough” is more of a personal confession of dissatisfaction. It is easier to imagine Kensrue wearily singing the song near the end of a Thrice set than it is to imagine a throng of worshipers singing along.

The music video for the song confirms this. Indeed, the song ends with Kensrue’s characteristic bellow – a sharp reminder that the man who now sings these worship songs once closed sets screaming, “The earth will shake.”

Yet, as much as “It’s Not Enough” would sound more at home on a later Thrice album, the song is in keeping with the theme of satisfaction. It is a song about having “absolutely everything,” and, yet, still being unsatisfied. Here, Kensrue picks up on another way Christians have talked about satisfaction. He refers to John 4, where Jesus talks about himself in telling the woman of Samaria that only living water will satisfy her thirst – hence, “the water” in The Water and the Blood.

Commenting on songs like “It’s Not Enough,” Kensrue admitted that there is a lot of crossover from his Thrice career.

“I wrote a lot of songs in Thrice, so it was a lot of practice for what I am writing now – even though it is for a different focus, a different purpose. But I think a lot of the stuff still crosses over.”

Over the course of 14 years and eight albums, Kensrue wrote a lot of catchy songs for a band that often had the word “hardcore” attached to its name. Songs as stripped down as “Come All You Weary” and as fast-paced as “The Artist in the Ambulance” (both from The Alchemy Index) were songs that fans could easily follow with their voices.

Kensrue attributes this phenomenon to Thrice’s distinctive attention to meter. He says, “If you look at most of the Thrice stuff, we were really concerned with consistency of meter.” This consistency is why Thrice songs are more like anthems than rock songs.

Despite Kensrue’s raspy vocals and the band’s genre-leaping, Thrice’s metric consistency continues to draw fans to sing along. Thus, years of practice at this kind of consistency have helped Kensrue become an effective worship leader.

“Consistency of meter doesn’t matter too much in rock music,” Kensrue asserts, “but it is hugely important in corporate worship music. You need that consistency for people to sing together.” Because Kensrue has practiced the metric consistency of his vocals over diverse instrumental contortions, he is able to pull off worship songs like “The Voice of the Lord” from his latest release. Kensrue’s vocals are remarkably measured, even though the instrumentals contort from atmospheric to thunderous.

More so, Kensrue’s learned consistency allows people to follow his raspy – thick but cracking, sometimes bellowing – voice. It is an instantly recognizable and beloved voice among his fans. It has always carried a sense of weariness, but it has always conveyed a sense of strength despite itself. Kensrue’s voice has something of a gruff authenticity. Because of it, The Water and the Blood is an album of silver lining worship songs. Each song has a sense of tiredness and, yet, each song points to something beyond the singer.

With the stylistic idiosyncrasies of his voice and songwriting, Kensrue’s The Water and the Blood was written primarily for the specific church he leads in worship Sunday to Sunday.

“Our focus for this record is writing music for our Mars Hill church to sing, and secondarily for churches outside,” he says. With this focus, Kensrue has gathered together a set of songs that target the unique “demographic” of the congregation he leads.

“We just reach a different demographic than a lot of churches, essentially, younger men from teens to 40 that are not generally in churches,” Kensrue says. “So we sing songs that men can sing, that men can grab a hold of.”

For this reason, The Water and the Blood is an offering of worship songs spanning from exuberant praise (“It is Finished”) to somber plea (“Come Lord Jesus”).

“We just want to be accessible to the guys who come into our church,” Kensrue elaborates. “I would really hate for someone to not hear the gospel preached because they don’t feel comfortable.”

In writing songs that are accessible to his congregation, Kensrue is not trying to place the men of his congregation at the center of the worship. Instead, he fervently desires that nothing get in the way of people hearing the good news of the gospel. This includes the worshipers themselves. In his own experience, Kensrue has seen how many worship songs place the human at the center of worship. These songs lead persons in singing something like, “God, this is what I do for you, this is how much I love you,” Kensrue says.

“What I needed to hear – what I think we all need to hear – is primarily how much God has done for us and how much God cares for us. There is so much freedom and hope and joy in the truth of the gospel,” he says.

In other words, when worship focuses too much on human efforts and problems, it focuses on human efforts to satisfy. Kensrue hopes that the worship songs on The Water and the Blood allow for a clear hearing of satisfaction in Christ and an experience of satisfaction in the hearing.
Kensrue’s latest release is about the satisfaction of humanity accomplished in Jesus Christ. It is an album that aims to communicate the sense of gratification God offers. Yet, it is also an album that conveys a degree of fulfillment felt by Kensrue himself.

“Worship music at Mars Hill Church is really where I am digging in right now,” he says. “This is where God has called (my family) and we’ve been really blessed to be here and really excited for what comes in the future.”

Dustin Kensrue was posted on October 7, 2013 for HM Magazine and authored by Jonathan Nelson.