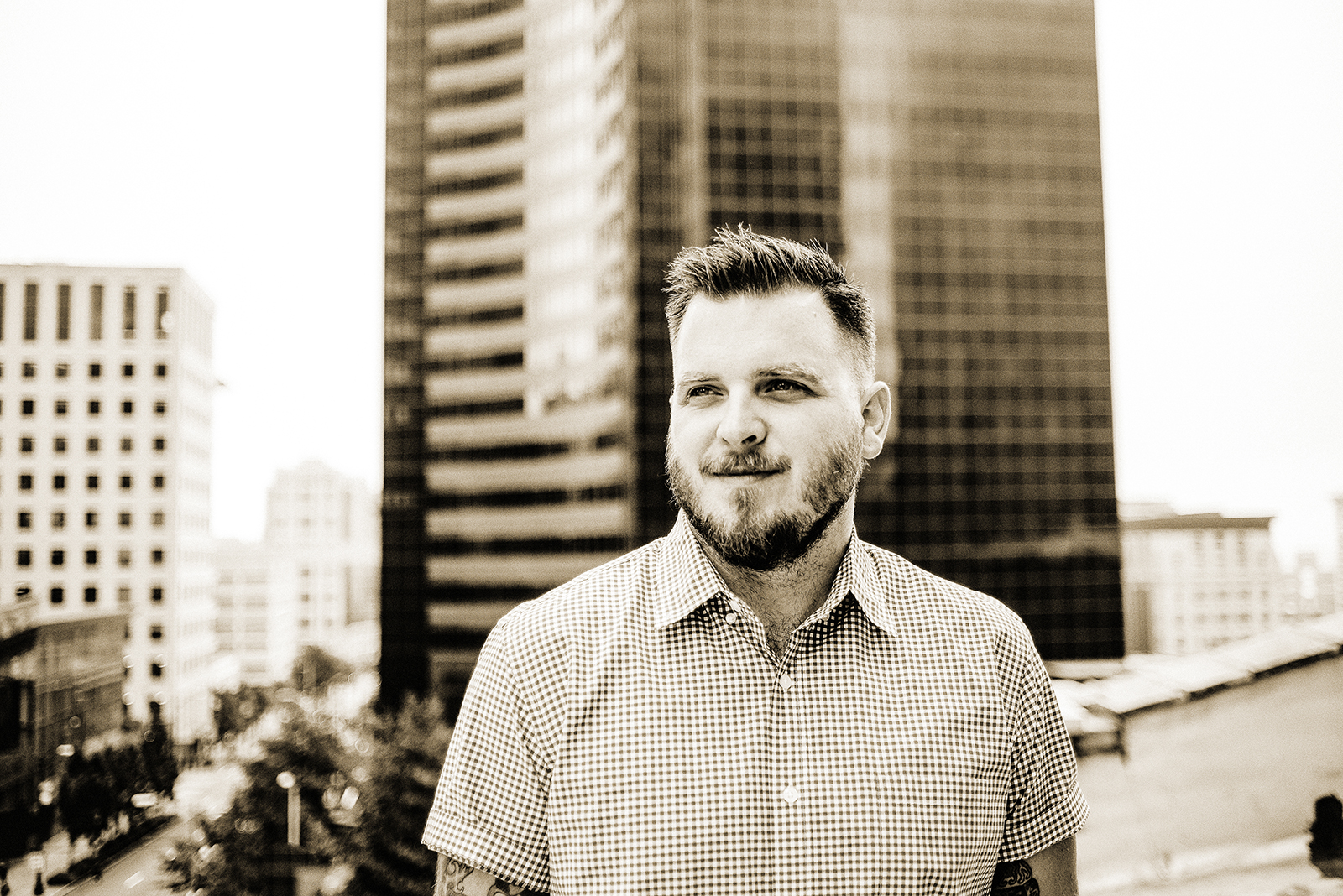 Home for the Holidays

Let’s talk about the new EP from The Modern Post. How did you decide on the songs you ultimately chose? Are these songs that you wanted to include in your previous Christmas album? What do we got going on here?
They are songs… I don’t know. It might be easier to address the name first, actually. That will shed light into that question.

Sure, yeah.
Originally, I had released an EP under that name for Mars Hill Music. I was with a band I had in Orange County before I’d moved up to Seattle. We would do worship on Sundays at Orange County, more so than when I moved up there and made a full-length. We decided to put it out under Dustin Kensrue, and there were various reasons for that, the main one being this idea of wanting to have something of an integrity — I don’t know if there’s a better word… As a person, I want to be proud of what I’m putting out. There’s not like, “Hey, I’m saying this over here in this realm, and something else over here.” I think there was a good instinct, concern-wise, but I think what I’d failed to consider is you can still do that while realizing there are different spheres, different purposes for different things.

I think what I ended up doing was confusing things in a lot of practical ways, and then even just for people who were coming to hear the music. While I would love for people who normally wouldn’t listen to that to hear the songs, I also wanted it to have context for, “Oh, this is something different than the normal.” There’s a difference in purpose for how you’re approaching writing that stuff.

In the end, I felt like it was confusing, so we decided — moving forward — that whenever I put something out that’s more explicitly made for the corporate worship setting, I would use “The Modern Post,” and for everything else I would just use “Dustin Kensrue” so it’s still clear it is me making the music. It’s also distinct enough to know what’s going on.

You’re separating the two aspects of your work. Is what you’re saying?
Essentially, yeah.

OK, sure.
That gets back your first question of how I picked the songs. Since I was writing this record — not exclusively, but primarily with the thought in mind of creating new arrangements for the church to sing — that led to why we chose certain songs. On my (own) full-length Christmas record, I wanted to get a good variety of classic hymns and classic pop Christmas tunes, so I divided the record in half and wrote a song that went into pop form and then wrote a song that went into more of the theological play together.

But on this one, I was just strictly saying, “OK, look. What great Christmas hymns have I not done yet, and what might be helpful to address?” I hadn’t done “Angels We Have Heard on High,” and wanted to do that. I know I thought about doing “What Child is This?” but I think a lot of people have mixed feelings about that song, with having a played-out feeling with the Greensleeves-melody feel, at times. It can feel a bit hokey.

I don’t know. When we were recording, a big thing we were trying to do was take each song and look at the lyrics, really try to bring out something different, and not just have this, “Oh, let’s make it feel Christmas-y.”

Let’s make it feel like a lyric wants to feel. “Angels We Have Heard on High” was this big party jam, very exuberant and loud. Then “What Child is This?” has this pretty dark feeling to it. There are a lot of heavy lyrics in there, connecting the manger to the cross.

It was fun to do that and let each song be what it was. Then, for “Child of Glory” — which a lot of people are really digging — was a song that Brian, the producer, had written previously. There’s a version of that on there. … I really liked the melody and the lyrics, so I just asked him, “Hey, let me take a crack at totally redo-ing that piece,” like, “Yeah, let’s go for it.” That’s what we did, and I think it turned out really well.

A little bit. It has been before by people and, a couple of years ago — this was even before I was working at Mars Hill — I had some friends involved in music there and they wanted to write a chorus to go with it, to make it work a little better in that setting. I worked on that with them, and we added that new section. I’d always wanted to redo that. It was already kind of a heavy song — the original one — but just wanted to take a fresh look at it.

I want to get back to some stuff about The Modern Post, but I want to move on as well with my questions. I did want to talk about your thoughts on Christmas songs, because you release quite a few. I know a lot of artists do that, but you do seem to enjoy them more. Is there any reason for that? Do you just like Christmas music?
Yeah, I’ve released an inordinate amount of Christmas music. I don’t know. It’s just worked out that way.

But a part of it is I really do love Christmas music. For a couple of reasons. There’s an intense nostalgia with Christmas music. It’s a very unique medium because we don’t have anything else we listen to this time of year. It’s these same songs every year, and you hear them by a ton of different artists.

Then, I also really like that there’s this strange crossover of theological issues being… That’s really interesting, the dialogue, that can come out of engaging these songs musically.

Do you have a favorite Christmas song?
I don’t know. I really liked — maybe I’ll say this one, because I haven’t recorded it — but I really like “Baby, It’s Cold Outside.” I wanted to record it on my full-length Christmas album. I don’t know if this is just me being uncomfortable with things, I just felt weird about singing that song not to my wife.

No, I can get into that.
It feels weird, but it’s like, people do that all the time and it’s not weird. Personally, for me, it’s a little strange.

No, I feel you. I’ve noticed The Modern Post, and then your previous — I forgot the name of the album, the one you released — was it “All Ransomed Sons”?
The Water and the Blood.

The Water and the Blood. That’s what I mean. Yeah, that. You have interesting minimalist artwork on there. Who designed the artwork?
The art was designed by people who were working at Mars Hill before, so, well, I don’t know if you know this, but that record was made planning to come out of Mars Hill Music, which is now defunct. Tooth and Nail purchased that back catalog, which is really cool. But we’d already been planning for that. We’d done the art and everything was tying back to The Water and the Blood.

I really liked that idea. It was that season, and that was the aesthetic, and I’ve made it and continue moving forward. But, basically, we kept that art because I eventually want to re-brand The Water and the Blood under The Modern Post title. That may happen next year.

But the idea of there being consistent, very iconic artwork, across those records is the goal.

It seems like with what you’ve told me, The Modern Post will be what you’re branding your worship music under. We can talk about that more if you want, but I do have a question. I know you’re no longer with Mars Hill, but do you ever see yourself being a pastor again? Or are you now just focusing more on your solo projects?
I do see myself being a pastor again. I don’t think I would seek any kind of full-time employment through the church any time soon. … I would be planning on serving whatever church I’m attending, and I’m open to some kind of part-time stuff, but I feel like it’s a different season right now. I feel like going back to making more music and I think there’s a lot of unique opportunities for dialogues in this position I have.

I think there’s a uniqueness to the relationship I have with a lot of people that are not Christians, who wouldn’t go near a church but have some respect for me. I’ve been very vocal about what I believe in. I want to maintain that kind of relationship, if you can put it that way.

I want to also just get everyone caught up on what you are doing now. You’ve currently been performing solo with a couple of other artists who are with bands that are also performing solo, right? What music are you doing right now live?
It’ll be a mix, especially since it’s in late December. I’ll play some Christmas tunes, some Thrice stuff, some solo stuff, some covers. It’ll be a bit all over the place.

You are also in studio now, or are you planning to go in the studio for your next solo release?
I am recording, in mid-recording right now and also mid-writing (laughs). I’m recording myself, and I hope… The plan is to be done recording by the end of the year and have it come out sometime in the spring.

Do you know if there’s any plans for you to do a tour with that new release?
Yeah, I’ll definitely be doing some touring in support of that.

Awesome. Is there anything else you’d like to add about the new EP for The Modern Post, or anything about the new album coming out?
There’s not a lot on the new album coming out yet. I want to get the best time to share. The EP — I don’t know. I hope people like it. It feels like it’s a fresh take on a lot of the songs. I think, actually, it might be a good release for people who are not the biggest (fans of) Christmas music. It might actually be a good record for those people if they want to do something related to Christmas but they’re generally not into it.

Dustin Kensrue was posted on December 1, 2014 for HM Magazine and authored by Jordan Gonzalez.