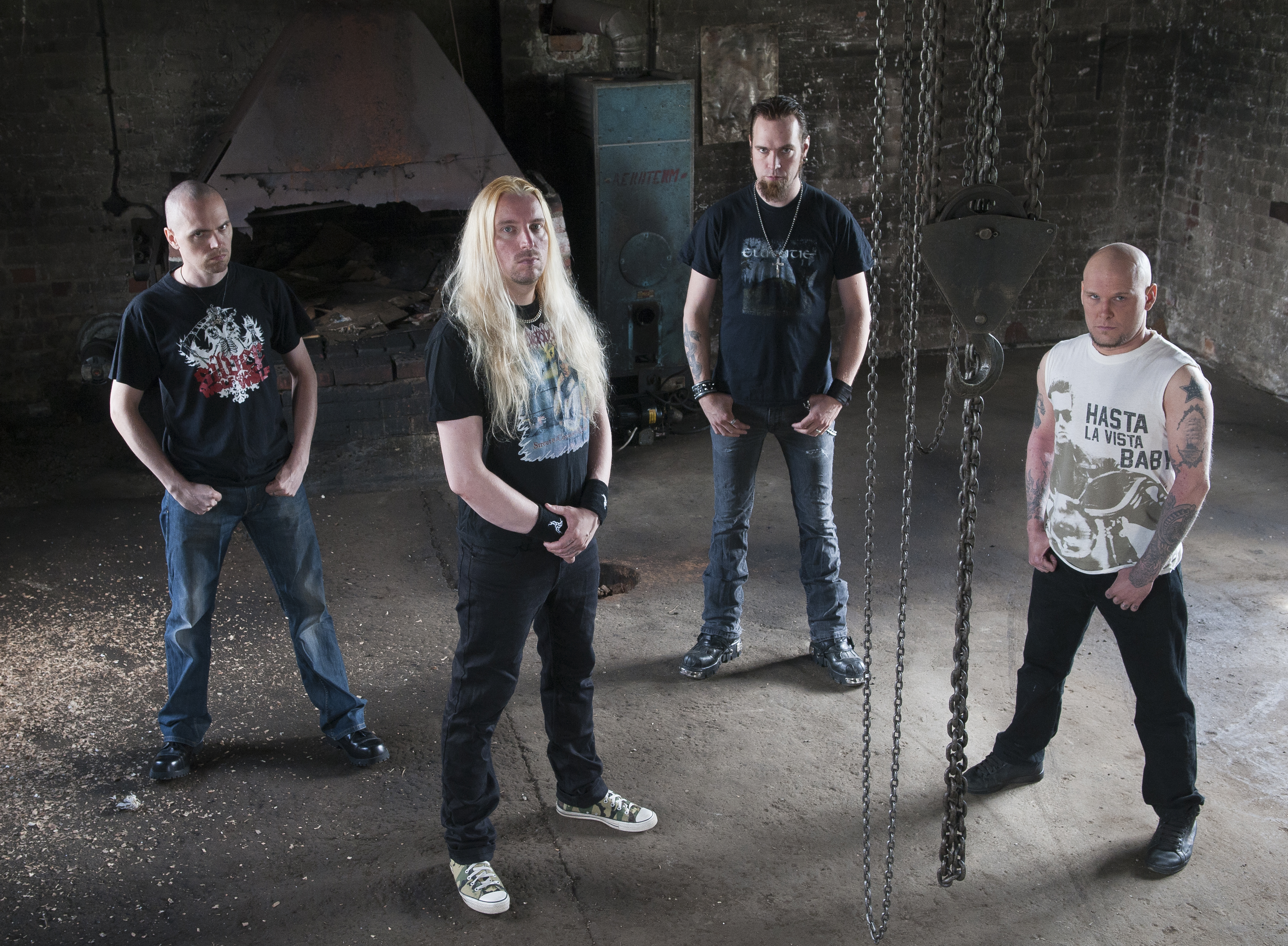 Still metal after all these years

Twenty years later, Deuteronomium is still more metal than you

Metal bands have as short a shelf life as any other musicians. Perhaps it’s due to the rigors of touring and recording, but whatever the reason, when a band reaches their 20-year milestone, it’s an incredible feat. And when a veteran band pulls out a killer album like Deuteronomium’s The Amen — two decades into their career — there’s a good reason all of us to celebrate, too. For the uninitiated, Deuteronomium is a death metal band hailing from Finland. I last spoke with founding member and bassist Manu Lehtinen for a Heaven’s Metal story about four years ago after the band released Retaliatory Strike, a vinyl-only EP. But when I contacted Lehtinen to talk about the new album, I didn’t hear anything back. Later on, new owner David Stagg told me vocalist Miika Partala (also a founding member), offered to do the interview with us; Partala explained that Lehtinen is on a sabbatical from the band and would return to “duty” in the fall.

I would like to congratulate Deuteronomium on their 20th anniversary as a band, and for their new album The Amen. The first and foremost question I have to get out of the way is about the name of your album. The title The Amen carries some sense of finality to it. Are you trying to convey that this is your final recording?
Thanks, man! It’s been a long and windy road so far. We are very pleased to celebrate the 20th anniversary, and we are so happy and satisfied with the new album. We had several options for the title, but The Amen simply sounded the best. It is short enough, easy to remember and it also happens to be one of Jesus’ names in the Old Testament. We talked about the finality issue, too, but only the Lord knows if this is our final recording or not — I sure hope it’s not. I want to celebrate our 40th anniversary too!

I see that you’ve been doing some tour dates in Europe on the 20 Years of Holy Metal tour with some other notable bands. Who have you been touring with, and how have those shows been for you?
We have been touring and sharing the stage with Antestor, Drottnar, Pantokrator and HB, to name a few. We also shared a stage in Mexico with U.S. acts Your Chance To Die and The Great Commission. We are just about to play with the legendary Whitecross in Norway next week.
We just love to perform. I think we are a way better live act than recording artist so the shows has been fantastic so far.

How did you approach creating this album, your fifth full-length release? I notice, Miika, that you wrote most of the songs on it and produced it. Are you always the main songwriter for the band?
I usually write most of the music and Manu writes the lyrics, but this time, because Manu is having his sabbatical year, I was chosen to take care of the lyrics, too, with the great help of the Holy Bible. On this record, Kalle, our lead guitarist, wrote half of the music, which was a blessing. He did an amazing job. He is a very talented player and composer, and I truly hope he will use his skills more in our future releases. Also, our drummer JJ writes some lyrics every now and then, but none of those ended up on this record. Some of his lyrics have been released on our previous albums. So all of us are taking care of the writing process when called upon.

Most notably, The Amen appears to be a praise album, but stays true to your death metal and thrash stylings. Was there a specific intention on your part to make a death metal praise album? We’ve been reviewing a lot of extreme metal albums lately, and have noticed a good number of bands, even black metal ones, making worship music. Many churches now play a version of modern rock worship, but metalheads long for worship in their own language. Is that what we’re seeing here: A new worship language in extreme metal?
I never thought, “We are going to compose a worship album,” it just turned out to be one, and I am glad it did. We have written worship stuff before, too, like one of our most notable songs, “Northern Praise” (1998). We have some plans to record a worship album, but this one was more or less a “mistake.”
I believe there will be more extreme metal worship albums in the future, since worship music in general is quite lame stuff and doesn’t fulfill — at least — my needs at all. Of course, worshiping God is not tied to any musical style, but I am glad there is an option for us metalheads, too. God is worthy to have all kind music for His glory.

Deuteronomium has been around for quite some time now, and you all have come a long way since your beginnings as a band. What have you learned along the way, and what keeps you motivated to continue making albums and touring?
Well, we just love metal music! Playing live, traveling around the world, sharing the gospel and meeting new, interesting people is a good motivator.

The most difficult interviews to do are with bands whose latest records are not available yet, because the writer doesn’t have a chance to listen and understand the music. That’s not the case here. In fact, The Amen has quickly become one of my favorite albums of 2013. I love the super-heavy imagery. Not just a graveyard, but piles of bones lying about. “The Harrowing of Hell” and “Hymn of a Lost,” with the gonging bell in the middle, are highlights for me. What songs are your favorite on the album and why?
Great to hear that you dig it, bro. My favorite songs are the opening track, “Dead Man Dancing,” and the title track, “The Amen.” Both of them have rhythmic elements I love. And both of those are great live tracks, which mean a lot to me. From the stage, it’s great to see people smiling, dancing, moshing and having fun. Especially “The Amen.” It seems to be the perfect live song. When we were performing it the very first time live and it wasn’t released yet, some people were singing along with the chorus, so it’s got be a pretty catchy song.

This time around you have a partnership with Starve the Flesh (Metal Helm) to produce on-demand merch for the band. I’m especially excited about this because it is often hard to buy shirts of your favorite bands from other countries. Do you guys have plans for more designs?
We are so glad to have the connection and partnership with the Metal Helm guys. They are doing an excellent job, and we are so happy our merch is available oversees. We have some plans for new (and old) designs for the U.S. market. We were talking about the opportunity to print some shirts for all of our releases so you guys could wear the shirt of your favorite album, but we’ll see. It’s a win-win situation for all parties: band, fans and distributor. Of course, I wish we could tour more and sell the merch face-to-face, but this is a very good solution at the moment.

What is the state of metal in Finland these days? Is it easy to get shows? Is metal still popular, or is it very underground there? Which European country is the most pro-metal?
I think all the Scandinavian countries are pretty pro-metal, but the metal scene is getting smaller, sadly. Not so many kids are into it anymore; hip-hop has taken the streets. But metal is still quite popular, though. Less and less people are showing up to the shows, and it is quite hard to sell any physical copies of your records nowadays. But I believe when metal gets back to the underground it will be more pure and honest. I am just happy if it’s getting back to underground. That’s where it belongs: on the outskirts of the music business.

What has God been showing you lately, Miika?
It took quite a long time for me to realize that Thy will is way better than my will. I have been a Christian all my life, but I was building my life on my own will, and I just ended up struggling every single day. For me, it was a life-changing experience to open up my mouth and say, from the bottom of my heart, “Thy will be done.” Since then, my life has been a roller coaster. “Thy will be done” is still my daily prayer, and it amazes me how I don’t struggle anymore. God is in control, and He has some great plans for me every single day. God has been showing me lately — and is showing every day — His will is good and He is happy to bless me.

Anything else you’d like to say or talk about?
Hope to see the fans at the shows. Don’t hesitate to get in touch if you want see us in your neighborhood. Believe me: We are willing to come to the ends of the earth to play if we are asked. Thanks for supporting us during these years and God Bless you, brother and sisters!

Deuteronomium was posted on July 2, 2013 for HM Magazine and authored by Chris Gatto.