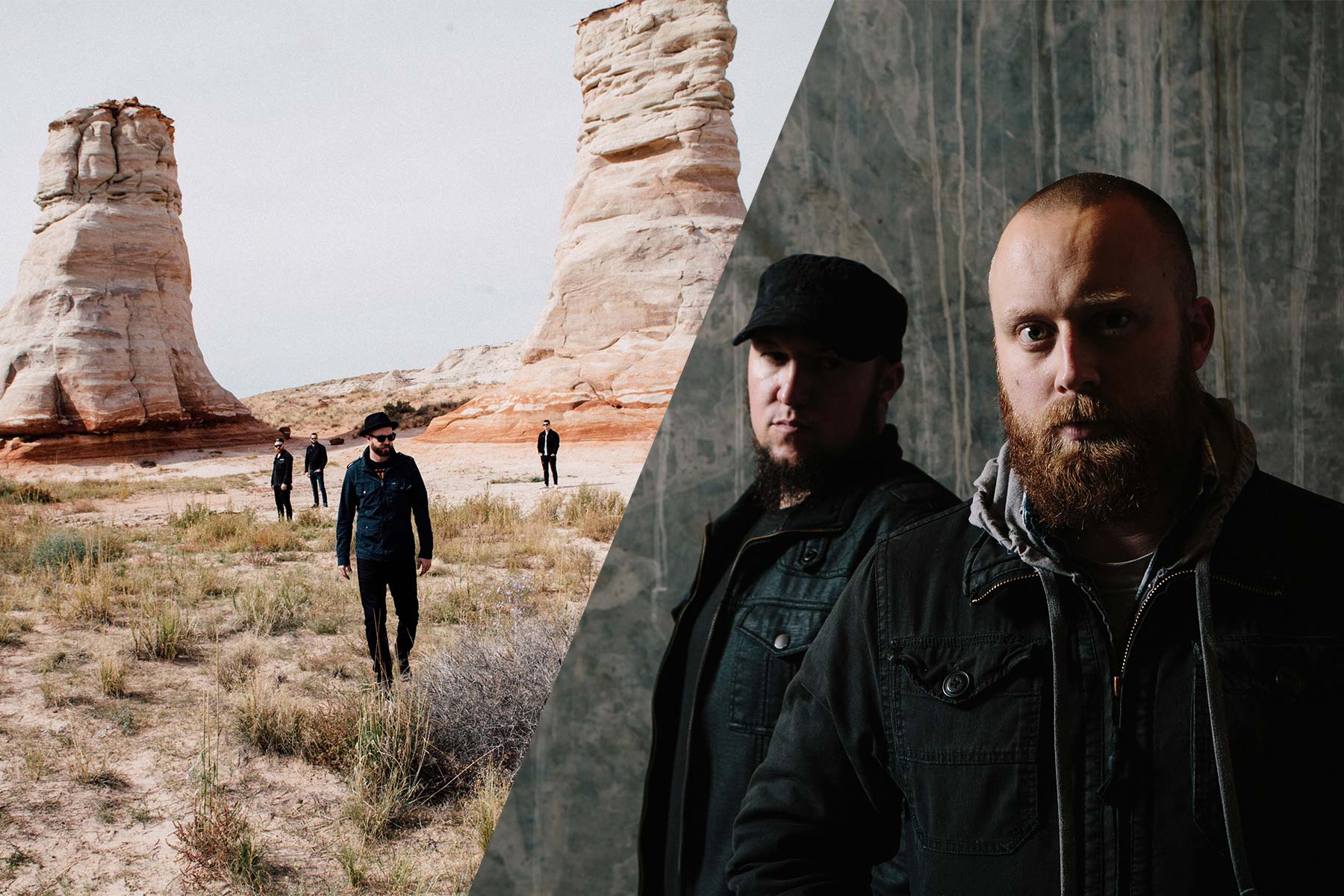 Meeting of the Minds

Project 86 is celebrating their 20th anniversary; Death Therapy is celebrating their first album. We get the two vocalists together -- Andrew Schwab, who joined Death Therapy on one of their recent singles as a featured vocalist, and Jason Wisdom -- to talk about the career arch of their bands, sustaining a band in the evolving heavy music landscape, and why Garth Brooks is still important

Jason Wisdom is probably most known for his work as the frontman and bassist of technical death metal band Becoming the Archetype, a band he exited about five years ago after performing with the band since 1999. Without abandoning his instrument, he set out to start his new band, Death Therapy, with the interesting quirk that it would be guitar-less; he would front the band playing the bass. As Wisdom explains, he felt the compulsion to start the new band, the writing and creativity associated with all that comes with music-as-a-full-time-gig was his therapy (pun intended). It was necessary to his well-being. It’s almost as if he couldn’t wait around for a guitarist.

Andrew Schwab is also a lifer, his band Project 86 celebrating their 20th year in 2017 with a new album; the work was the result of a successfully funded crowdsourcing effort, something the band had tried and seen great success with in the past. Schwab, as well, is no stranger to creativity. He’s an unstoppable force whose writing output is so great it seems to be the result of finding every extra hour in the day and squeezing the last drops out of them.

Recently, Schwab joined Death Therapy for the track “Self Mind Dead,” titled as an ode to the Swedish hardcore band, popular in the late-’90s. The two bands have toured together. The two vocalists have been a part of the heavy music scene for two decades, helping to shape and influence the sound along the way. It was about time to get the two together. Here, Wisdom and Schwab discuss their respective bands’ newest albums, what it means to be an artist in today’s heavy music landscape and why Garth Brooks is still important.

Jason Wisdom: My very first heavy music concert was a Project 86 concert. I became an instant fan. The blend of deep grooves and heavy metal riffs were forever engrained in me and has consistently showed up in the music I write. The challenging, intellectual and artistic lyrics shaped the way I approach writing my own lyrics, even to this day. For those reasons, I am honored to have the chance to talk with you today. Thank you so much for taking the time to chat with me.

First of all, congrats on the recent (and successful) PledgeMusic campaign for the new Project 86 album. This isn’t the first time you guys have gone the crowdfunding route. What do you like about that way of making albums, as compared to the more traditional, record-label funded type of approach?

Andrew Schwab: It’s much more satisfying for the fans to feel like they are a part of something special, not just another “record.”  This time around, fans can listen to the music as we make it, which is super fun. The gratitude on our end of things, and the gratification, is just on a whole new level. I wish we could have made records this way since the beginning. However, it is nice to have a label foot the bill and do all the legwork of booking studio time, producer, etc.

JW: It’s hard for me to believe that Project 86 is 20 years old now. So many bands have come up and died out during those two decades. What is it that drives you to continue making new music? And what does the future hold for Project?

AS: It’s wild to think that much time has passed; I agree. It does go quickly, living from show to show, tour to tour, record to record, and — really — it has never stopped. I guess I am driven by the challenge of trying to create something new and exciting each time. I love surprising people — especially when they think our best days are behind us! If you listen to the last two records (and especially the new material we are working on from the forthcoming release), I think we make a strong argument that is not the case.

JW: A lot of times, fans and artists are on opposite ends of the spectrum when it comes to excitement about new music. Artists are always saying, “Wait until you hear this new stuff,” and fans are often saying, “We love your old stuff.” What should longtime fans of Project 86 expect from the new album? Is it more of an experimental new direction, a new take on the classic sound, or a little of both?

AS: At the end of the day, it all comes down to emotion and songs.  If we make a song that moves you, that makes you sing along and you connect with the lyrics, then new or old doesn’t really matter. Of course, people are going to associate their love for a band with that first taste — and whatever life circumstances that first taste caused them to connect with the music to begin with.  In that sense, it’s very difficult to chase history, so to speak, so I guess I have given up on trying. We can’t make another “Spy Hunter” or “Stein’s Theme,” and I wouldn’t want to. But, “Fall, Goliath, Fall” or “SOTS” or “Acolyte March” or “Genosha” are just as good of songs, in my opinion.

“Music has changed so much since we started. We were fortunate enough to carve out our own unique space during a time when heavy music was still kind of uncharted.” Andrew Schwab, Project 86

JW: When my new band, Death Therapy, joined you on tour last November, one of the first conversations we had was about how you’ve learned a lot from doing music full time for more than two decades. What advice would you give a brand new band starting out in 2017 to help them get off to a good start?

AS: I don’t know where to begin. Music has changed so much since we started. We were fortunate enough to carve out our own unique space during a time when heavy music was still kind of uncharted. Today, rock music barely exists, and it is nearly impossible to make a living as a new touring band. I would say just have realistic expectations and savor every opportunity. Take nothing for granted. Music careers are very fragile.

And just to play your songs onstage is a blessing in and of itself.

Andrew Schwab: What was the impetus for starting Death Therapy?  Talk a bit about the band name and how it reflects the vision of this project.

Jason Wisdom: The reason for starting the band was simple: I couldn’t help it. It was 2015 and had been almost five years since I left Becoming the Archetype, and I needed to be writing, recording and performing music again. Without exaggerating, it is an outlet that is very important to my personal, psychological wellbeing. So, I didn’t really have a choice. I had a lot going on in my life, a lot of personal struggles that I had been battling, and I needed that outlet.

The name Death Therapy has a lot to do with that process of dying to myself and the therapeutic value of honestly putting my issues out on the table. On a more superficial level, the name also comes from the pivotal scene in an old Bill Murray movie called What About Bob. Folks over the age of 30 (like me) might know the reference.

“The reason for starting the band was simple: I couldn’t help it.” Jason Wisdom, Death Therapy

AS: Speak a little bit about your unique guitar/bass setup onstage.

JW: Here is the short version so that I don’t bore anyone who isn’t a gear geek. I run two separate signal chains from my pedalboard. One goes to a guitar cabinet and the other to a bass cab (powered by a stereo amp). The result is that I am able to create a wall of sound that, at least to some people, gives the impression that I am playing both bass and guitar at the same time. I assure you though, I am not “guitar synching.” If I stop playing, both cabinets are silent. That’s a challenge I didn’t face with Becoming the Archetype when I had two guitars and a keyboard to cover me up if I stopped or made a mistake.

AS: Is there a theme on this album? What are you trying to say with this debut release?

JW: The album is called The Storm Before the Calm, and the theme is really about finding hope in the midst of the storm. With that said, some of the lyrics and concepts are likely to strike some people as dark and even hopeless sounding. That is because, as the album title implies, I wrote these lyrics from the middle of the storm. I am still facing many of the struggles that are expressed on the album — doubts, depression, etc. These are not things I wanted to hide nor sugar coat. I wanted the lyrics to be genuine and personal. I feel like if we can’t address these issues honestly — if we are always trying to paint over them or act like they aren’t a big deal — we may think that we are just being faithful to the hope of our faith. But we actually do a great disservice to the good news of Christianity by portraying those issues as something phony and small, not “big enough.” Sometimes things are dark, and we don’t have to pretend they aren’t in order to still hold on to our hope.

AS: What is the best concert you have ever been to and why? What makes for a great live show?

JW: I am going to sound like a giant loser for saying this, but the best live show I ever went to was a Garth Brooks concert. (I know, I know.) But let me tell you why. I have never been to (or even seen on video) a concert where every person in the audience sang along to every word or every song. Not just the choruses; for two solid hours, everyone sang every word. It was amazing. That taught me a lot about what it means to write a good song. And at the end of the show, he came back out with just an acoustic guitar and took requests from the audience. It wasn’t staged at all but very intimate. Think about that! This guy has sold more records than I could ever dream, and he came out and took requests. So good.

AS: If you could change one thing about the state of heavy music today what would it be?

JW: I would do away with the elitism that is so prevalent, especially in the metal scene. It is like a cancer whenever it becomes prevalent in an area. Once upon a time, people were just stoked to go to a show and if the band was good. They could enjoy it and have fun. They would support any band that came to their area, and they were stoked to find new music to buy. But now there are a lot of people who are so elitist that they can find any reason at all not to like your band, come to your show or get your album. People need to get back to a simpler attitude. It would be great for the whole heavy/indie music scene.

Death Therapy and Project 86 was posted on February 22, 2017 for HM Magazine and authored by David Stagg.