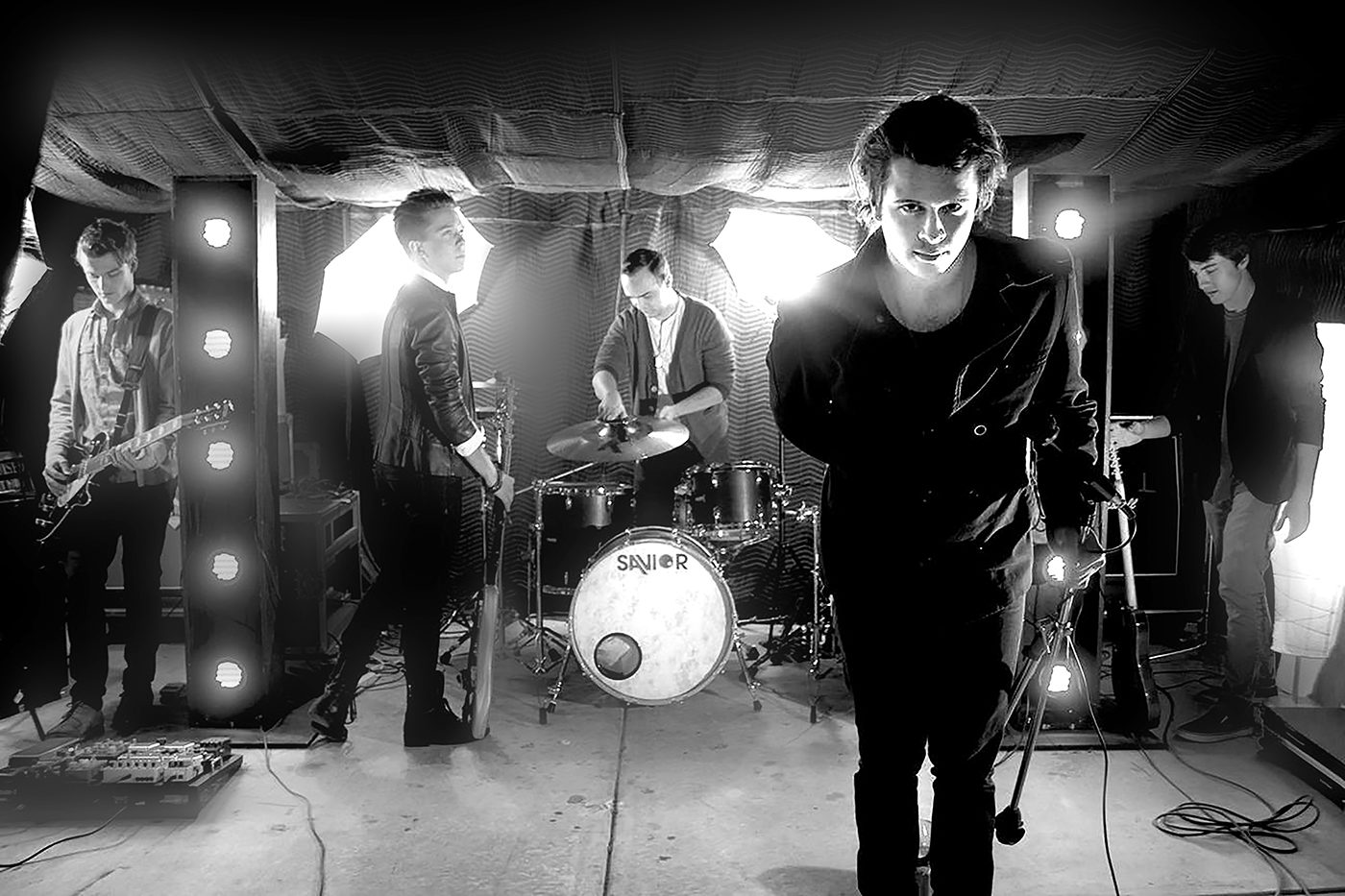 Bruised But Not Broken

So first off, after listening to your new album, Fragment, props on having just about everything you can think of, musically, on this record. I love how everything is just so new and different on every track.
I’m really glad to hear you say that and that you feel that way. We’ve been told by some people, or asked, “Why would you make a record that’s so diverse and spread around?” We like a lot of things. We don’t really want to follow some straight line. It was like an act of faith, really. I really love Maylene, but I also love Memphis May Fire and Explosions in the Sky. We like music in general. Not just one thing. We wanted everything in there.

We all come from pretty different backgrounds. Our drummer, Matt, started out playing jazz. Our guitarist, Trevor, plays worship music and then fell in love with Underoath. I grew up listening to country music.

We all stumbled into metal, though. Our other guitar player, Josh, loves bluegrass and underground rap music! We’ve got a ton of different things we all love in this band. It’s funny how it all came together, and we were able to meld it all.

I get that sense that Maylene is a primary influence when listening to some of the album, primarily “Devil’s List.” Would you agree?
I really don’t think so. A lot of people will bring Maylene out after listening to “Devil’s List,” and that song, we just wanted to have a real Southern song on there, so in the middle of the song there’s a ton of feedback and chaos. That was something we wanted, but we didn’t want it to be, like, put on your 10-gallon hats and spurs (laughs). We wanted it to sound that way, so either we’ll make a track like that, or we won’t and we’ll be bummed out about not doing it. It’s only 1/10th of the album, anyway.

More of the influences we have come from the melodic and the hardcore. We all love Memphis May Fire. The influences really come out of all the various genres and kinds of music that we listen to.

It really does come together when we’re writing. We’ll say while writing, “Have we heard this a million times before?” Some songs start out the same way, and it’s something I’ve heard so many times — and while it still sounds good — I’d much rather make something new and that we enjoy, and something we think other people would enjoy as well.

Tell us a bit about the journey to Fragment.
The first EP, Just(Defied), we started writing when we were freshmen or sophomores in high school. We stuck with that for quite some time, but we were writing Fragment for probably a year and a half. We spent a whole lot of time on it. We didn’t have a record label, so we were in the process of making a record to hopefully send out, with rough recordings, to see if anyone wanted to get us into the studio, make it come to life, more than we had already made it.

We lost our original guitarist during that time, and gained, Trevor, who is phenomenal. He actually just moved up to lead guitar and we grabbed Josh. He actually didn’t even play guitar when we picked him up. He’s just a great friend of ours, and had drive and ambition, along with a ton of talent.

Fragment is really a blur, man. Particularly with how long it took. We finished the album in like July of 2013, and we’ve been sitting on that material for like a year and a half beforehand, and it finally came out in March. So it’s definitely taught us patience. We definitely learned that virtue. We haven’t even stopped writing though, we’ve got three songs written already for the next album.

What was the writing/recording process like?
We didn’t go into the studio and write in the studio. We went in with everything written out. So we got about 10 days ahead of schedule, and we went back over all the music a few times before we started vocals. Our drummer Matt records and produces, as well; so does Trevor. We were definitely equipped to do pre-production, and we worked as hard as we could to make it happen.

My phone cuts out a few times. I confess I had recently switched to T-Mobile, and the members of the band began ridiculing me.

Yeah, I’ve got T-Mobile so it may have been my fault.
T-Mobile? What are you doing with your life? You got suckered into something, didn’t you?

It seems like there’s much more electronic this time around, compared to your first EP. While the other elements are definitely present, the synths and electronic sounds seem more prominent. Was that by design?
I don’t think it was really intentional. We don’t really have one thing that we ride, that we think is going to take us anywhere. I don’t know how we got techno — the word ‘techno’ is used in our descriptions, sometimes, and I have no idea how that got started (laughs). Our use of electronics — we try to make it as tasteful as possible. There are definitely pieces of the new record where they take a prominent stance, but I don’t think we ever focused on making it a thing we increased. We wanted our guitar work, songwriting and drum work to be noted as much as the other things. We didn’t try to push it.

It almost reminds me of I See Stars sometimes.
I don’t think we’ll ever get that far into it, with like a breakdown and 50 different tracks over it with a ton of dubstep drops on it. I don’t think we’ll get there, but we listen to stuff like that all the time, as well. It all kind of rubs off with what we do.

Why do you guys do what you do?
Because we’re not doing anything else! (Laughs) I’ll spare you the obvious answer of it being our dream and what not.
Being completely honest, our mission is to really help people in such a way that it’s from one person to the next. I always want people to hear my words before my voice, and we all want people to hear the big picture; to hear the intent of why we’re playing, rather than first hearing what we’re playing.

It’s definitely a message of hope and love and encouragement. We’re all victims of a world that — it doesn’t always look down to harm you, but hope is pushed lower than hatred. We’ve really grasped the power of compassion. We exist to go forth and love people how we were first loved. Our mission? We’re never going to finish it. We want to make everyone on Earth feel like they’re worth something.

I guess we can’t be friends then.
I guess we can’t. I want this interview destroyed. Interview over. Are you not a L.O.T.R. fan? Talk to me. What are you doing with your life?

Is this strike two?
No way, this is way beyond strike two.

I’m sorry, I’m just not a huge fan of the movies. I haven’t seen “The Hobbit” movies.
What are you doing? Sorry. I’m not trying to get angry. But seriously.

I was bored with L.O.T.R.
You were bored?

Yes, for the 12 and a half hours of film I sat through with, like, seven other people.
OK. You’re into romantic comedies, aren’t you?

No, I’m not (laughs).
I don’t believe that for a dang second. Alright, man-to-man: What’s your movie prowess?

I like sci-fi movies, horror movies, movies that make me think.
OK. Did you watch “Lost”?

Yes, loved it.
OK. Yes, “Lost” was amazing. It got a little weird with time travel and stuff at the end, but overall, great. Here’s the thing about L.O.T.R., and I’m trying to convert you. Just give it another chance, dude. There are three things that we are lacking in society. And you can change the world with loyalty, hope and beauty. And you get those things from L.O.T.R.

Trevor, Josh and I, we skateboard. And we’re all really terrible at it, but we’re better than some people. And worse than some. Zach really loves boy bands. I’m sure that makes you feel uncomfortable. He likes Big Time Rush and One Direction and Justin Bieber. Things that make your father ashamed of you.

I guess this is the nail in my coffin, after T-Mobile and L.O.T.R. I’m not a Belieber, but that new album he released is really good.
Right? Dude, it’s great. Answer me this, though: Why does Big Sean have to ruin every good Justin Bieber song?

Thank you for saying that.
I’m glad we agree. That’s what I’m saying. I don’t understand. Have you heard Skrillex’s new album?

And what’s up with Chance the Rapper randomly in there? He’s not even rapping.
Something’s happening at some party, and he’s commentating. He’s not rapping. He’s giving me a play-by-play. “Tattoos, piercings and she just learned to twerk,” as if those are the qualities that you should learn. I don’t understand.

Bruised But Not Broken was posted on April 3, 2014 for HM Magazine and authored by Justin Mabee.