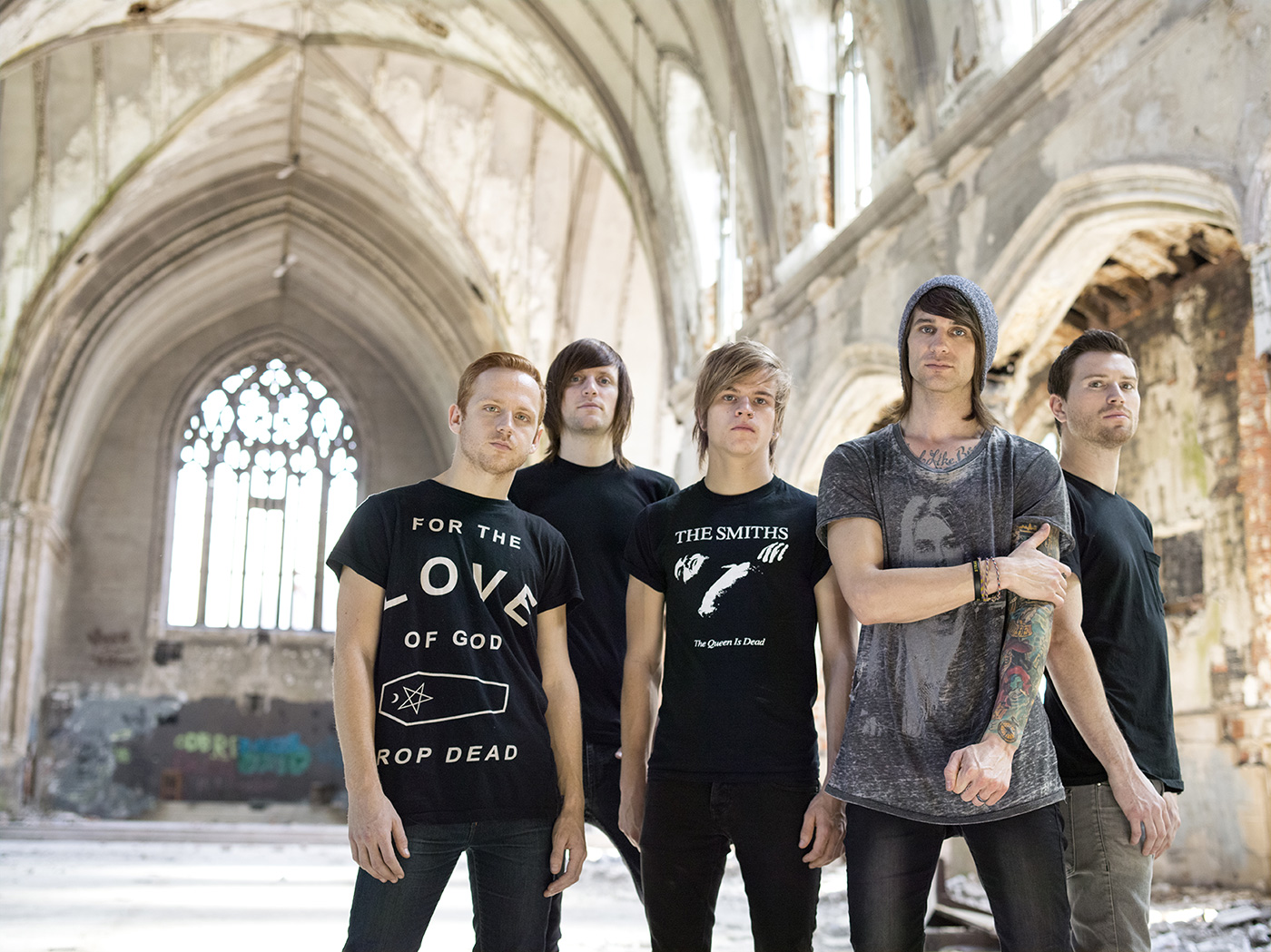 Fresh off their latest release and a headlining gig on warped tour, Blessthefall is ready for the spotlight

It’s been a few years since I last spoke with Beau Bokan. Back in 2011, he was about two years into his vocalist duties, and the band had dropped off Warped Tour to record their third release, what would become Witness. Now, there are no questions that Bokan can hold his own among the industry’s frontmen, and, with Blessthefall’s latest release, Hollow Bodies, they’re out to prove that being empty isn’t all that bad.

How has Warped Tour been for you guys?
Last year, we were on the Monster Stage, which is a smaller stage compared to the main stages here at Warped Tour, but it was an honor to be asked to come back. It has been awesome. We are on tour with a lot of bands we are friends with, and we get to hang out with them and see all of our fans on a daily basis.

With so many bands repeating year after year on Warped Tour, would you guys consider doing it over and over again?
Honestly, it would be an honor and really cool if we could make it a reoccurring thing. As long as our band remains relevant and the fans want to see us, that could be a possibility. (Warped Tour founder and owner) Kevin Lyman is a great guy, and we have a good relationship with him. As long as he keeps asking us we will keep coming back.

What’s the dynamic like on the tour? Is there a battle to be the best? How do the fans react to your new stuff?
We go on stage and we give 110 percent every time. I don’t think that there is a battle to be the top band in the genre.

We have friends in and out of the Christian scene, and if fans think we are the best band, then great. We put out one single and it has been doing really well. The sales are doing very well, and our fan base is growing. Some of the kids do not know all the words, and some do, which is great — as long as the kids are there.

Then, for the new single, we are starting to see more and more people knowing the lyrics and singing with us. There is a lot of interaction, we play the song “You Wear a Crown, But You’re No King,” and it is going amazingly well.

The new album has a lot of metaphors and symbolism within it, but how much thought went into that theme, including the album cover?
On the writing process side of things, Elliot started using Logic Studio, a recording program, and the very beginning stages of the album started (by being recorded) on Logic in a room on a laptop. Then, after I got sample tracks, I would put in my opinion of spots for the vocals. Then we went into the studio in Phoenix where the first album was recorded and did pre-production there. We could polish our demo tracks, and get better ideas for (their song structures) — figure out what we did like, didn’t like, what was going to stay and what was not going to stay.

Then we went into the studio with Joey Sturgis and he multiplied our album by 10. Watching the record go from the early stage to where it is now has been insane.

Joey is just an amazing producer. We did so many things we have never done before, or even thought about. We have live strings, violin and a cello, a little bit of digital programming  — which we have used before, so that was not from left field — but we got more in-depth with it, made it more up to date then the older stuff we used in the past. We have some guest vocals as well, the first time we have done that. We have Jake (Luhrs) from August Burns Red, Jesse Barnett from Stick To Your Guns, and we co-wrote a song with Vic Fuentes from Pierce the Veil, which was a first for us as well. There was a lot of firsts for the record once it was finished.

The intro track is something Elliot wrote. We were considering creating an intro track, but we liked how the song sounded and how it came out, and decided it would be the opening track. It definitely sounds great and came out well, and will be great to open a set with on tour.

Can you tell us a little about where the title of the record comes from?
“Hollow bodies” is a lyric from the title track, and it is a metaphor for zombies. It’s kind of targeted towards empty-spirited people, musicians and the things going on in our industry and world in general. People are just writing mindless music to make money, to be cool or to be famous. They are going about their lives with no purpose and no spirit and no goals.

“Walking Dead” inspired the track, and I got really into the show — especially this past season — as did the band. So we thought using a zombie or undead metaphor would fit perfectly with what we wanted to say.

Can you expand more on that symbolism on the record?
There is more storytelling and other metaphors on this album, where as before, our records were more straightforward. We really wanted to paint a picture for the fans listening to the album, create a visual (for them). … The face on the cover art is flaking off. It represents the shell of a person, and we thought it was a perfect image. We talked a lot with the photographer about getting the look we wanted. We even discussed if we wanted blood, the red color, or just black coming out of and on the woman’s face.

It’s an image people will remember, and it will stand out. It represents the title of the album, and brings the album together as a whole.

How have audiences responded to your new work? Do you think they will be supportive of it?
We have always been very connected to our fans (through social media). The more time we invest in them that way, and the more we meet them on tour… We feel the connection that is made inspires them to buy the album instead of download it for free. A lot of the support we get comes from the band reaching out and connecting to the fans (directly). The more real you are, the better the reaction is from the fans. They feel like they are part of the band and part of what we are trying to achieve.

Now that this record is done, so is your contract with Fearless. What are your next steps?
We talked about it a little bit. Would it be worth going independent or not? Should we stay with Fearless?

They have been amazing to us, and we definitely love the label. Honestly, I think Fueled By Ramen would be entertaining, only because they do not have any hard bands on the label. And touring with Paramore and Panic would be a funny, weird tour because of the diversity of bands and fans. However, Fearless is at the top of the independent labels, and not many labels can compete with the hands on work that they do for their bands.

Lastly, how does Hollow Bodies compare to past work from Blessthefall?
This album is leaps and bounds compared to our other albums. It makes some of our older songs sound like demos. I am just hoping for a breath of fresh air, that we got a lot of new fans and we continue to grow. We want to play some new and favorite venues on a headlining tour, really pack out a few rooms. Tour some parts of the world we haven’t seen yet. Take new steps and continue to move forward.

We have some stuff planned for the Fall with some really cool bands. We are going to release the info on what’s to come after Warped Tour (is over), so stay tuned.

Blessthefall was posted on August 13, 2013 for HM Magazine and authored by Anthony Bryant.