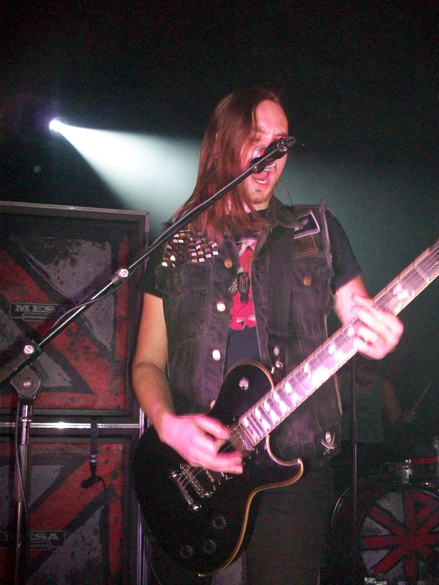 I had the honor to take in the Save Us Now Tour featuring Disciple and Fireflight with special guest Bellarive in Barrie Ontario, Canada thanks to Everyeye Media. Bellarive got the night started with their little harder edge style worship got the crowd going and they to be enjoying Bellarive and hope to here more from them. Next up came Disciple with the new CD but the same excitement, they launched their set with “Oh God Save Us All” which got the crowd up and jumping extremely quickly and before you knew it the hair was flying around. They then move into a couple of older favorites like “Set It Off” and “Dear X, You Dont Own Me”before returning to some stuff from the new album. The energy this line up brought was electric with the chemistry of Kevin Young Trent Reiff Josiah Prince Jason Wilkes and Andrew Stanton on stage together. The work they put into preparing for this tour showed as they look like they were together for years. It is so nice to see Disciple back out with their hard hitting southern rock and Kevin has not lost anything. The guys also played “Outlaws”, “Unstoppable”,”Kings” and “Draw The Line” from the new CD and classics like “Invisible”,”After The World” and “Scar Remains.” Fireflight finished the show and after the Disciples performance everybody could not wait for them to take the stage and when they did the crowd went totally different level with every song. They started the night by asking us to “Stay Close” and that crowd got the crowd bouncing. They played a number of what are now classics songs of theirs mixed in with songs from the new CD “Now”. They played old favorites such as “Unbreakable”,”Stand Up”,”For Those Who Wait”,”Desperate” as well as new favorites like “Strong Than You Think”,”Ignite” and “Now”. The most interesting and surprising part of their performance was the rendition of “Now” that they did. As they came to what everyone thought was the end of the song “Now”, Fireflight started into a portion of Phil Collins “In The Air Tonight” which caught everyone off guard but was totally amazing and finished it on with “Now”.156
I must say this tour put on an amazing and enjoyable night of entertainment and excitement and only was a great way to kick off the 2013 concert season.