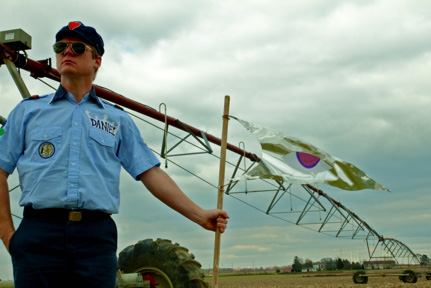 Five years. A very long time in popular music, especially in the present moment when the delivery systems, the methodologies, are changing weekly. And yet five years is the time it took Daniel Christopher Smith, a.k.a. Brother Danielson, a.k.a. Danielson, to complete this his newest work, Best of Gloucester County. Normally what happens to our artists of the popular song, in the completeness of adulthood, is that the demands of family and mid-life make the write/record/tour rat-race unappealing, and five years ensue because the artist no longer wants, not entirely, what the popular song offers in the way of profession and culture. Instead, he wants some of what family brings. Who can blame him?

But in a way, Danielson has, during the five years, let go (reluctantly, perhaps) of some family collaborators—namely his brothers Andrew and David, the percussionists, and childhood friends Chris and Ted, on keys and bass/guitar respectively. While sisters Megan and Rachel and Daniel’s wife Elin, the essential chorus for many a Danielson Famile song, still appear, the bulk of Best of Gloucester County revolves around a completely new “team,” as Smith has put it himself (Patrick Berkery– drums, percussion; Evan Mazunik– piano, organ; Joshua Stamper– bass; Sufjan Stevens– banjo, vocal; Andrew Wilson– electric guitar), most of them local players from the Gloucester County, NJ, area where Smith lives and works and has his studio.

That means that Best of Gloucester County is not, despite the title, a retrospective “Best of” album (that would be Trying Hartz, the last Danielson-related release), but rather a statement of intention. Danielson is now a locally-owned and locally-ambitious entity, and, in this case, a locally-released (Gloucester County) album, since this is the first Danielson release on Daniel Smith’s own Sounds Familyre label. Seizing the means of production! With the result that here is a genuine attempt to dazzle! The tracks are thoroughly arranged (with bass player Joshua Stamper creating some great horn charts), and the rhythm section (which, in the past, was charming and lovely) sounds more like a rock and roll rhythm section than ever before, and the addition of an electric guitar player throughout means that the interplay between guitars, and the relationship between guitar and keys and glockenspiel, is quite a bit more dramatic, more cinematic.

What does that mean? What does a Danielson album actually sound like, if it is no longer “outsider art,” but is, as it ought always have been considered, a thoughtful and persuasive contribution to the world of popular song? Suddenly the musical forebears are not quite as distant, so that you can hear bits of Captain Beefheart and Syd Barrett in the mix, psychedelic music in general, also the Kinks, the Beatles, T. Rex, and also country and folk and gospel (but in a way that doesn’t sound like country and folk and gospel). These influences now give way to a completely realized musical vision, in which arrangement is pursued with a singularity untold earlier, but which is just as virtuosic as on the “chamber pop” releases of the present moment, on an Antony and Johnsons album, as on a Grizzly Bear album, as on a Joanna Newsom album. Danielson, that is, has become a beautiful thinker in popular music, idiosyncratic but accomplished, whose major keys are always slipping away into minor keys, whose chord progressions are most often chromatic, always modulating, whose voice, somewhere in the area of two entire octaves, is in every register here, as though he has to be the entire chorus himself.

For this writer, one of the very best of the earlier Danielson Famile releases was Tell Another Joke at the Ol’ Choppin’ Block (1997), in which there was a trance aspect to some of the compositions, as though the record were Qwaali or Raga. The good news for listeners to Best of Gloucester County is that it picks up that same meditative, and semi-improvised approach to the drone, in “Hosanna in the Forest,” and in “Hovering Above that Hill.” In fact, the album drives ultimately toward these more uncommon song structures, passing through some musical-theater and pop-inflected numbers—”People’s Partay,” and “Lil Norge”.

The whole represents a new and welcome chapter in the Danielson oeuvre—a startlingly effective new band, a new thematic field (the locally-grown opus), produced with more sonic ambition than any recent Danielson effort, but without sacrificing the brave interior journey that we have come to expect from Daniel Christopher Smith: the world is complex, slightly dangerous, full of temptations, but there is still grace, beauty, meaning, and the music that is required to suggest all this is anything but easy, but that doesn’t mean it is not rewarding, beautiful, funny, sad, and generous.

5.  But I Don’t Wanna Sing About Guitars

9.  Hovering Above That Hill