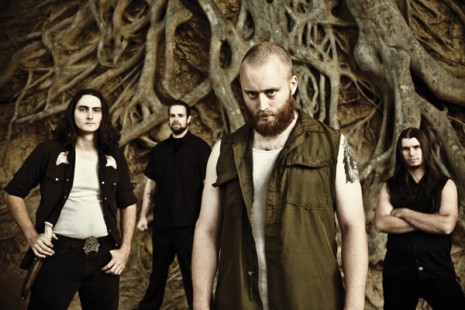 Well, we shot a music video, which is seriously gonna be the best thing anyone’s ever seen.  The video has 2 parts.  One part of the video is 8bit graphics (like original Nintendo) of us as Final Fantasy type characters.  The directors basically created a Nintendo game about us!  The other part is seamlessly intertwined with the first part and is real life shots of us and it looks like Lord of the Rings, no joke.  We’re only in the video as actors.  No shots of us jamming in an empty warehouse.  We wielded swords, axes, maces and spears for two days straight, from dawn till midnight, at 4 different locations including an epic cave, a bog/marsh, and a gigantic stone mountain.  We had to wade waste-deep in muck through the bog with our weapons above our heads so they wouldn’t get ruined.
It’s seriously gonna own everything.  It should be out in less than 3 weeks.