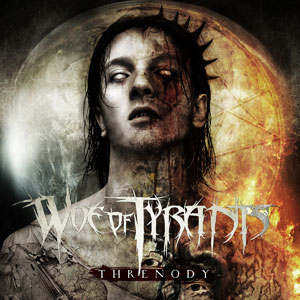 Full Metal Jackie, North America’s largest syndicated metal radio show, is premiering a new track from Woe Of Tyrants’ new album, Threnody. Jackie will spin the song the weekend March 26th, so make sure to tune in to the rock radio station nearest you to listen! You can find the station nearest you that carries the show as well as broadcast time on http://www.fullmetaljackieradio.com.

Singing Surrender is the 9th track of the album and has one of the most memorable riffs on the entire record. Vocalist Chris Catanzaro explains further: “Singing Surrender was the first song we completed for our new album “Threnody” and is a personal favorite of ours to play live. Before I named the song we dubbed it ESPN due to the similarities between the opening riff and the theme music for Sportscenter. We still refer to it as ESPN, and probably always will (unless we get sued by Chris Berman or something). Thanks for listening!”

Threnody hits streets April 13th and is available for pre-order now on http://www.metalblade.com/woeoftyrants. Woe Of Tyrants is about to join Overkill on their 25th Anniversary Killfest tour, so make sure to get your tickets now so you don’t miss the show! After the Overkill tour, the guys will tag along for a short east coast run with Entombed and Merauder.