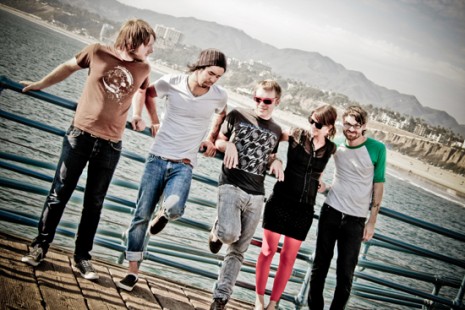 Q: How did you hook up with Deep Elm Records?
A:  I’ve always liked those guys and the records they put out so i sent a demo over. A couple weeks later i was on their site checking their FAQ about following up on demos and it said they’ll contact you if they like your stuff, I go directly from that page to my inbox and i have an email from John at Deep Elm. It just said “i’d really like to talk to you” and had his phone number. We had just done some showcases in LA and so we were all in trust-nobody-mode when we met up with him but he runs a tight ship and he’s been around long enough to know what works. He actually had answers to our questions and not just the “You guys are gonna be the biggest band ever!!!” hype. So the band met up afterwards and all decided it was a good fit. – jeremy

Q: What are some artists from their catalog (if any) that caught your attention:
A:  500 Miles To Memphis is my favorite, I’m a sucker for country punk. Desoto Jones will be stuck in your head for about a year after you hear it. Track A Tiger’s new record is pretty legit too. – jeremy

Q: Anything you’d like to add?
A:  Quit your job and start a band. – jeremy

When taking an idea or phrase and grafting that into a melody to make a song, how soon do you know if it’s going to “work” or not?
Honestly, it depends on the amount of time I have to develop the idea. I can make almost anything, ‘work’, but if I don’t finish the idea in the first sitting it is gone forever… It’s hard to come back to something later and feel the same inspiration as you felt the first time it hit you. I will record the melody on my cellphone, zoom, macbook, voicemail, etc… to make sure that I don’t forget it if I don’t have time at the moment. Invariably, I will forget it or it will turn into an Oasis song or something. – mark

What are your standards or tests that a song has to go through before you know it’s good for Public Radio or not?
Public Radio is a live band. That is my litmus test for whether a song will work for us or not. A third of our show will be new/unrecorded songs and we can tell from the response whether it is right for Public Radio. Of course, everybody likes to dance, but some songs will really get heavy and and we can tell that we really believe what we are playing. Those types of songs are what we try to do as Public Radio. – mark

If you had to choose one over the other, which is more important: a catch phrase, witty lyric or poetry? Or the melody attached to it that makes it memorable?
I am biased, but I think that words can take a great song and elevate it to the next level. There are so many great instrumental bands out there like M83 and Explosions that can take you to a place that most bands with words can’t. I would think of a song like a story, the music is the story line and the words are the ‘lesson’ that you take away from it. You can have a great story but not necessarily take anything meaningful away from it unless there is something bigger under the surface – those are lyrics to me. -mark

Comment on any or all of the artists below:

Dashboard Confessional– well honestly i hated them when i first heard about them bc every girl in my highschool would sing the line “screaming infidelities” all day, and they would never sing another line. but as the hype wore down i secretly bought the cd and i actually liked them. i havent kept up with their newer stuff, but “hands down” is quite a catchy tune i must say.

Bob Dylan– he is great for karaoke purposes!!

Tom Waits– music lovers might hate me but, i have never ever given old Tommy a chance only bc he was one of my more annoying friends idol for a while, and well. . . .you get the picture. i will listen to him and get back to you.

Peter Murphy– i could listen to him all night long.

Tom Petty– i love everything that i know by Tom Petty. by now everyone reading this thinks i am the biggest music snob ever, but i was turned off when he played the superbowl and all of the “american girls” (even the ones who were not even singing the words right) were on the fan waggon. hmm i guess it wasnt his fault that network tv sucks.

Michael Jackson– this one is tough. everyone i know seemed to become a fan when he died. he was a great music legend and a pioneer at what he did, but it makes me shake my head at the generation now who think alien ant farm wrote the song “smooth criminal.” – luke

Imagine that you are given the power and option to alter (only) one of the two events:
1. you could prevent Nazi Germany from losing to the Allied front in WWII
2. you could prevent the US from dropping two nukes on Japan in WWII
What is your choice? Why?
you kinda cornered me here. being asian, you would think i would change the nuke dropping on japan. but seriously now. . . . would anyone really want to see what hitler had planned next? doubt it. i would actually prevent the US from dropping the bombs on japan and maybe just maybe more people now would know how to use chopsticks. this was a hard question. so i tried to make light of it.- luke

What is one thing that no one seems to “get” about your band? Why do you think that is?
I don’t know, we get asked a lot what it’s like to be married and in a band together.  I guess it might seem strange to some people that Mark and I are married and we have a baby and we’re still doing the band thing.  We’ve never been the typical “American Dream” couple always looking for the better job, bigger house, better car, etc… We’d rather be together, doing something that makes us happy, not building an empire of stuff and living from paycheck to paycheck.  For us the point of being married is to actually spend time together, not working separate jobs till our 50’s and only seeing each other on weekends and holidays.  Eventually music will pay our bills and we’ll travel the country living in an RV with our son.

Also, a lot of people don’t get some of the labels we’ve been defined as, such as emotronic or electronic-rock.  But it’s simple, we’re rock and roll with some catchy hook synthesizer parts…and we have something to say. – jessie

What is the first thing or group of things that most people do “get” about Public Radio right off the bat or very soon after hearing/seeing you perform?
Seriously, it’s hard to not notice our drummer, Luke Hill when you see us perform.  He’s a natural rock star and born entertainer.  Everyone notices and loves Luke and it’s obvious to see what an asset he is to Public Radio.  People also pick up on our strong sense of camaraderie.  We’re not just band mates, but we genuinely love each other and I think this shows on stage.  We’re not pretending to have a good time rocking out together, we actually are having a good time.  I think people pick up on this and it gives our show even more energy and magnetism.  I would also say that people “get” the message. You can feel something real pulsating from the crowd, like they’re with us and they agree with us.  The exchange is encouraging, to say the least. – jessie

Anything else you’d like to add?
Uhhhh…..I love you – jessie