It was a foggy night in Chicago, IL. In the windy city two big events were going on, the Chicago Blackhawks playoffs with one game away from advancing into the finals and As I Lay Dying along with Demon Hunter, War Of Ages and Bless The Fall.

The number of people attending was so massive that the first main floor was sold out, in resulting people having to go up in the balcony. Never have I seen the House Of Blues this over packed, even when Hatebreed played there it wasn’t this packed. 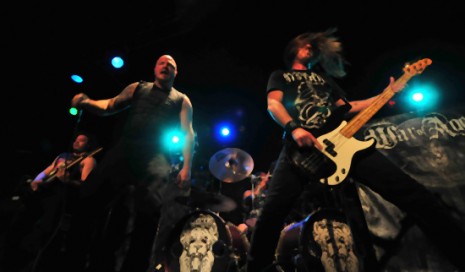 War Of Ages opened for the show, which was odd since they are bigger than Bless The Fall. On my way up the stairs to the main floor, War Of Ages ended their set with “All Consuming Fire.” The pit was wide open and people were jumping along with the beginning breakdown to the song. Heads were banging and lights were flashing with the circle pit drumming and fast riff guitar playing. After their set was done frontman Leroy Hamp went down to the front row to slap hands and give high fives for the fans.

Up next was Bless The Fall, who are based out of Phoenix, AZ. I’ve heard that this band was Christian but it was unclear when their guitar player ran out to the stage with his middle finger held high. With their massive banner behind them showing a skull with the band name in front, they rocked the stage with singing vocals and breakdowns. In promotion of their newest album Witness, vocalist Beau Bokan told the crowd to scream the name of the album on the count of 3. Right before their last song, they gave shout outs to the bands on tour and how it’s been a wonderful time.

Finally it was time for Demon Hunter. The crowd screamed when their banner was being raised with the album cover from Summer Of Darkness. When the stage lights went off, screams came from every direction of the venue with excitement. Appearing first on stage was drummer Yogi Watts waving to the crowd, then everyone else in the band stormed to the stage.

Vocalist Ryan Clark was up in front with his foot on a stage monitor. It was nice to see Clark representing the old Demon Hunter look by wearing a black bandana across his forehand. They opened their set with “The World Is A Thorn.” During the chorus, strobe lights were flashing at a fast rate which made the band look like they were moving in slow motion. It looked cool with rhythm guitarist Ryan Helm’s dreadlocks flapping around. Right after that song, the band jumped into “LifeWar.” It sounded like bombs were dropping with the way that song sounded live, having the drums and guitars play on the same beat. 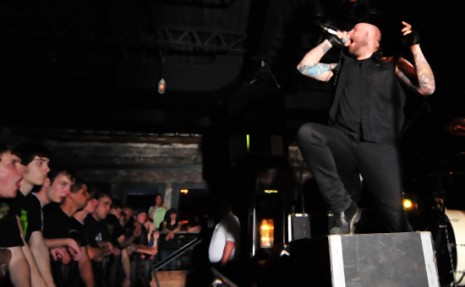 Demon Hunter kept the show exciting and fast with not playing any ballads. Even though Clark isn’t much of a talker on stage, he always asked the crowd between songs if they were having a good time. The circle pit didn’t seem to stop with “Undying,” “Tie This Around Your Neck,” and “Not I,” and “Storm The Gates Of Hell.” Clark after that gave a shout out to the “old school” fans.

“How many old school fans are here? This next one goes out to all you old schoolers. This one is off our Summer Of Darkness album. It’s called NOT READY TO DIE!!!”

One cool thing Clark did during “Not I” was right before the breakdown when the female vocals sing “Sing now seraph, find the calm within your soul,” a yellow light shined on Clark and he looked up with his hands raised as if he was about to ascend to the heavens.

They concluded with “Just Breathe” which to my surprise held up well. Lead guitarist Patrick Judge did an amazing job doing backup deep growling vocalist which are done by Christian Alvestam (ex-vocalist of Scar Symmetry) on the album.

While fans were waiting for As I Lay Dying, fans were screaming and clapping their hands while their equipment was being set up. Once again the fans screamed when their stage banner was relived which showed their album cover from The Powerless Rise.

Jordan Mancino’s drum set stood up on stage with a ramp in front of it for members to use. Right behind the drum set was a gong, which I don’t recall Mancino used during their set. The band opened with “94 hours” followed by “An Ocean Between Us.” None of the band members stood still with switching stage sides or jumping off the ramp that was in front of the drum set. Vocalist Tim Lambesis introduced the next song. “Hopefully you guys can keep up with this one. How many have the new album? This song is called ‘Beyond Our Suffering’.” 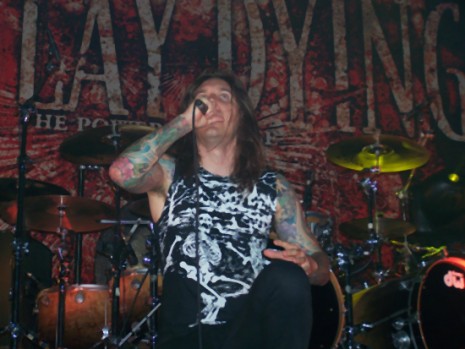 As I Lay Dying’s stage presence was so intense, that Lambeisis’s vocals couldn’t be heard over the crowd overpowering by singing along. During their set of “Through Struggle,” the floor felt like it was going to collapse through from all the people jumping up and down. I can say honestly the breakdown at the end of that song, was the most powerful live breakdown out of all the shows I have seen in my lifetime.

In the middle of the set, Mancino did an amazing drum solo. What made it eye shocking was the strobe lights flashing from all different directions. During his beats, Mancino did his signature move of “windmill” head banging while his feet were flying up and down on the double bass petals. Near the end, he stood up to make the crowd scream then sat back down to play. 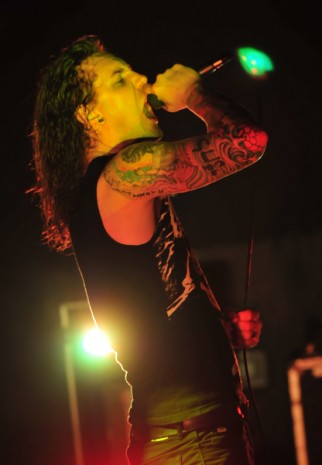 Lambesis gave thanks to the crowd for being amazing and fun to play in front of.

“How many of you guys lost your voice tonight from screaming? Every night I scream my head off for about an hour but the thing that keeps me going is you guys. You guys have been amazing tonight!”

Of course the crowd yelled for an encore when the band left the stage. Screams came back once again when the band played “Forever” and it looked just like the music video

Allentown PA – I arrived at the venue several hours before the show opening. I like to check in with the Tour Manager, stake out my angles for photos, and just hang out and see what happens. This show was somewhat unique in that there were no local bands opening the event.

The order of service was War Of Ages, Bless The Fall, Demon Hunter, and As I Lay Dying. During the sound checks I sensed a positive vibe from the sound and lighting engineers as well as the bands. This is not always the case, especially when every day is spent traveling to another town and another venue.

The doors opened 30 minutes before the show, the club quickly filling to capacity. I noted that a number of girls had pushed to the front to grab a glimpse of Bless The Fall. But War Of Ages opened hard with a salvo of Pennsylvania hardcore. It was fists in the air as Leroy Hamp and band worked the hungry crowd into a sweat. 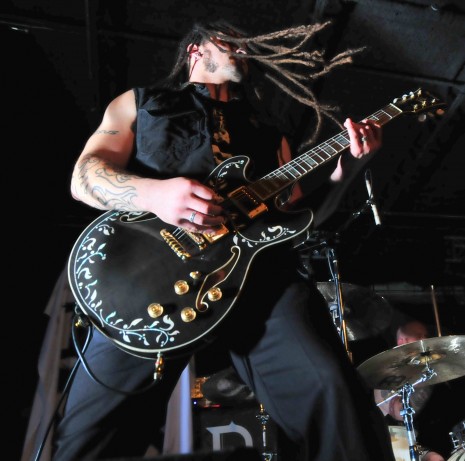 Back stage I noticed Bless The Fall’s Beau Bokan hobbling around on crutches. He took the stage and explained that he had fallen 25 feet at a previous show and was not supposed to be walking. The performance went on, however, with BTF dishing out both melodies and screams to the delight of the pit crowd.

Back in the “green room” Demon Hunter drummer Yogi Watts was engaged in a myriad of yoga-like contortions as he prepared for the stage. AILD’s drummer Jordan Mancino was also warming up for his time in the spotlight. Demon Hunter brought a new “more metal” sound with the addition of Patrick Judge and Ryan Helm on guitars. I particularly enjoyed the Swedish-flavored guitar work of Patrick Judge.

Finally Lambesis and crew took the stage amidst a cloak of fog.  Drums and bass brought boots to the chest while guitars sent ice picks to the eyes in full metal style. No one left the show feeling empty. All the bands were clearly having fun and gave all to the fans. If you can catch this tour, you won’t be disappointed.