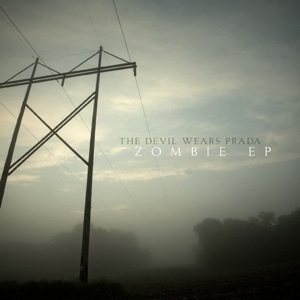 Rumor has it that the only way to kill a zombie is to remove its head, and The Devil Wears Prada’s listeners should be warned that decapitation may very well be a side-effect of listening to their new release, Zombie EP. For the occasional heavy music listener, this release may have disappointingly little prettiness dispersed throughout the mayhem. But for the metal fan, this album will gain TDWP more appreciation than any previous release.

For those who are wondering, yes, the lyrics are literally about Zombies. Not in the allegorical way either. We’re talking about Night of the Living Dead content here, folks. Lyrics like “Mankind is the losing faction; retreat is eternally hopeless” have replaced the often spiritual messages of previous albums, but not in an offensive way. There is an odd sense of approachability to Zombie, and while I wouldn’t take TDWP seriously if all of their records were about the world being taken over by mythical creatures, this addition fits nicely in their discography. The songs are well written, powerful, and as catchy as any set of metal riffs can be, with a musical uniqueness that their scene is starving for. Because of the lyrics, this record won’t be what The Devil Wears Prada is remembered for, but it will most definitely be remembered.

This week HM chatted with front-man Mike Hranica to discuss the upcoming EP and, well, Zombies in general.

Bianca Montes: Your new EP, the Zombie EP is coming out with a comic book as well; tell me a little bit about the comic book.
Mike: Right now the comic book is being illustrated, we have this dude Kevin working on it, which is actually a full blown, like, comic book illustration. So far it’s been looking really awesome, we’ve been really excited to see how all of it is coming together, and I don’t know, it’s looking perfect. We’re really excited about how well everything’s illustrated, its about 14 pages of full-fledge comic book, it’s not like scaled down, small, it’s the average comic book size. It’s meant to be, whether it was about the band or not, it’s supposed to be a comic book, and it follows a story about the band members killing zombies, and they have this mission, but the mission isn’t revealed until the end of the story, but its rad. We’re really happy to be doing it; we’re all really excited about it being that it’s something that not really many bands do. I know Coheed did like a comic book, but uh, this is something that I’ve really been touched upon.

Bianca Montes: Speaking of Killing Zombies, what would be your weapon of choice in a zombie breakout and why?
Mike: It would really depend on my location, if I were in some sort of tower position, I’d want a snipe, but if it were close combat, I’d want definitely like some sort of shot gun, that just seems like the best tool to get that, you know, brain.

Bianca Montes: So, what’s your favorite zombie movie?
Mike: I really don’t have one. When we were coming up with the EP, I spent a lot of time reading books rather than watching the movies. It helped me get a lot of cool ideas too. I was really stoked about it. I read The Max Brooks books, the World War Z and Zombie Survival Guide and I read Pride and Prejudice and Zombies, which was pretty fun. I read this like zombie anthology which was an anthology of a bunch of short zombie stories, and there was some really sweet ones in there, and I kind of just worked off of all of that.

Bianca Montes: Is the Zombie EP a story from start to finish?
Mike: It isn’t, each song follows its own theme, it’s not really a story to be from one song to the other, and just each song follows its theme. The most story-based song is survivor which is the last song on the album, it’s about this dude who lives out in the middle of Kansas on a farm, and the zombies killed his wife, and now he is just extremely lonely. His biggest problem is solitude as compared to actually having to battle the zombies. That’s the most story based song.

Bianca Montes: What made you want to make an EP rather than a full length album?
Mike: Pretty much the EP is not overwhelming. A full-length based on zombies, which is for us it was all meant to be a lot of fun rather than something meant to be taken extremely seriously. To have a full-length would have been too much, it probably would have got boring, you know? The EP was better because I feel like when I listen to the EP, at least by the end of it, you feel like you got your fair share of a lot of action, but you don’t get bored at any point because its not that long, its like 20/25 minutes. The fact that its something based off a not so  serious subject, even though its meant to be like hard and heavy, I think a full length would have been too much.

Bianca Montes: Have you road tested any of the songs from the new EP and what were your responses?
Mike: We’ve been playing “Outnumbered” which is the only song we have online. We’re not trying to put a bunch of songs out there because it’s only a five-song EP, so you don’t want everybody to have like, if we put out another song, then they practically have half of the EP, so we’ve just been playing outnumbered the whole tour, and so far, the reaction is great.

Bianca Montes: Is there anything else you want to share about the Zombie EP?
Mike: We’re really excited about the whole project. I think everyone should know that. I think its really meant to be fun for the fans as far as something that doesn’t, like I keep saying, it doesn’t have to be taken totally serious, but it’s really heavy and sinister and everything, so I don’t know, we had a lot of fun doing it, it’s meant for the fans, and I hope the fans enjoy it. Go pick it up or preorder it, if you preorder it, you get the rad comic book which is also at a pretty low price which is something we really focused on when we were putting together the preorder packages, so I hope everyone enjoys it and it was fun to come up with.

For more information on The Zombie EP, or The Devil Wears Prada visit their website at: http://www.tdwpband.com/