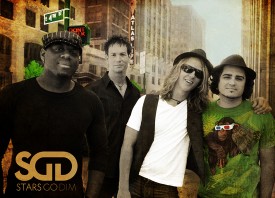 Famecast has announced that Tulsa based ‘Stars Go Dim‘ has advanced to the final round of the Samsung AT&T Summer Krush Competition.  Starting today a panel of industry judges will choose a winner to perform at the Grand Finale of one of this summers most successful tours. The event will take place in Los Angeles and will be broadcast on Jimmy Kimmel Live!

Stars Go Dim’s Bass Player Mike Wittig had this to say upon receiving the news, “We are so grateful to the thousands of SGD fans that continue to shower us with their support and inspire us to work even harder every day. We love our fans and cannot thank them enough.  We could not have done this without them”

Even though the voting is over while the panel of judges works to choose the winner, the bands fans can still go to the bands contest page and leave comments for the band and judges to see.  If chosen the band will open up for a major act in Los Angeles as this amazing tour concludes.  They can also win $5,000 in prize money, an article in Spin Magazine, and a new Samsung Jack for each band member.  And the TOP FIVE FANS that voted the most will also each receive a Samsung Jack.  The band has already stated that they plan to donate a portion of the winnings to a charity of their choice, if they win.

2009 has already been an amazing year for Stars Go Dim, and from the way things are going that is not going to change for some time as this band continues it’s climb to the top.  Congratulations to the band, their loyal street team and many supporters!