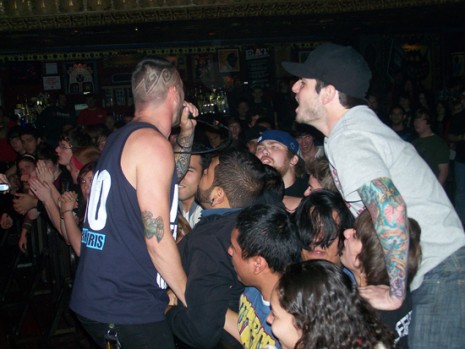 Sleeping Giant is riding on the road with Legend, Oceano, Born Of Osiris and Bleeding Through. The name of this tour is The Spring Breakdown Tour: 2010, and the name couldn’t have fit any better. There were so many breakdowns that you would be doing jumping jacks all night long. 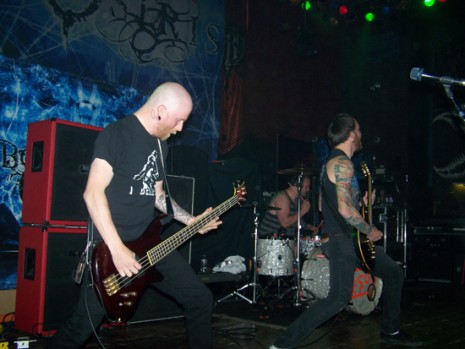 The venue was the House Of Blues in Chicago, IL. It is a small place yet big enough inside. Throughout the whole building are monuments and picture frames of legendary Blues artists along with some voodoo type statues. However this is one of Chicago’s best venues. 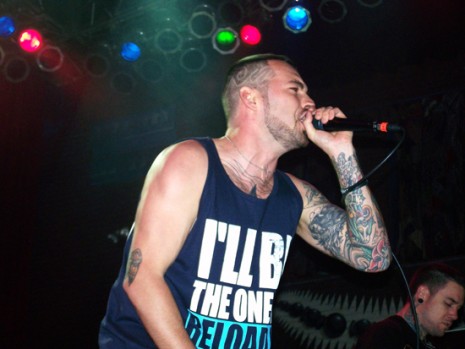 Since this show started so early, there was not much of a crowd for the first two opening bands. Most of the people were Hot Topic kids with their gothic girlfriends. I even think I saw a “Juggalo” there. Nevertheless Legend and Oceano played as if there were 5,000 people in the audience. After Oceano was finished, members of Sleeping Giant helped break down their gear in order to set up their own. More and more kids with Sleeping Giant and Impending Doom shirts started heading down to the floor for what was about to come. 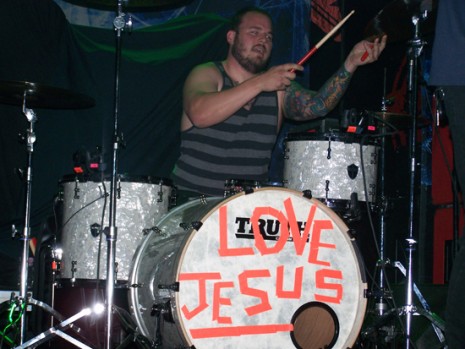 Guitarist Eric Gregson started to do sound check on his microphone yelling “I am checking this mic! Yes! I am checking this mic!” Along with making funny noises, the crowd started to laugh and somehow it seemed like the whole venue started to have a positive vibe with their presence. Vocalist Thomas Green came on stage with a smile and asked how everyone was doing. Already people were screaming song names they wanted to hear. Green once again had a different hair style and seemed skinnier and taller. 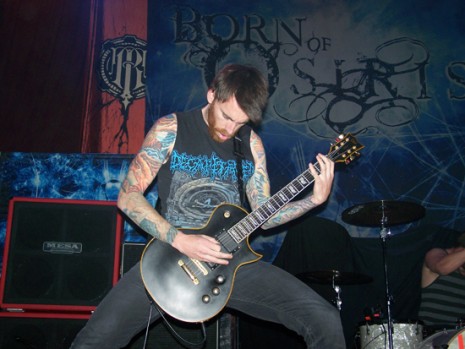 The band started off the show with “Gang signs” in which the opening vocals made everyone go crazy. “I will bleed for the one who gave everything for me!” Already there were people jumping over the front line crowd trying to scream vocals to the band. On the floor, serious hardcore moshers were doing their karate spin kicks while the young “push moshers” were up front laughing away. 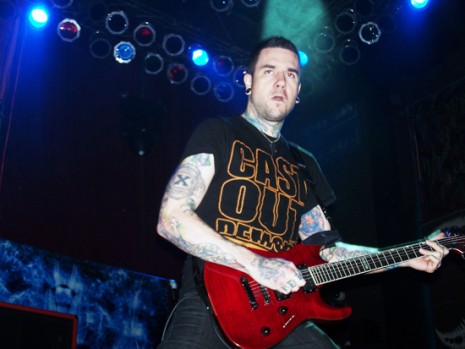 Up next was “Confessions” which gave the band a chance to worship along with the audience. The ending lyrics are “Jesus cover me in your blood!” A good amount of people had their hands raised and Green got on one knee and put his hands together around the microphone as if he was praying.

Green gave a testimony for the next song “No one leaves this room sick.”   He explained about a show they played in St. Louis, MO, at a venue which was basically a bar. There was a woman there in crouches that was in pain and Green explained how “They weren’t ok with that. We prayed for her right there at the bar and guess what? She didn’t need those crouches anymore! She was healed right there at the bar!” Many started to clap at the miracle they just heard even though it was obvious some people didn’t want to hear what was being said.

Probably the songs people went crazy over were “Blame It On The Holy Rollers” and The Army Of The Chosen One.” Green kept coming down to the crowd letting kids scream into the microphone.

Green kept thanking people for coming out and to support all the bands that were there because they all needed gas money.

The band finished out with the song “Behold The Pale Horse.” Before the song started, Green told everyone to chant the phrase “All hell follows with him!” As soon as the song started, a circle pit started. Green stepped back down to the crowd for the end of the song. Many flocked toward the front as he screamed, and the pile on started to grow bigger and bigger.

Right then the breakdown exploded as the pile on dispersed and moshing took up the whole floor. The chaos was so mad that people could feel the impact on the wooden floor and some security had to come out to the floor. Luckily no one got hurt.

Even though the set was short because of 5 bands being on the tour, Sleeping Giant left the crowd pleased and blessed. Soon after the band left the stage from high fiving kids, most of the hardcore kids left the show, leaving all the Hot Topic kids with too much hair gel and parachute pants to enjoy the rest of the show.