March 27, 2010 – (West Palm Beach, FL) – The Awake Tonight Tour brought together three acts with very different sounds, but combined, they provided a fun evening. TobyMac summed up his measure of the tour: “If there’s prayer and family goin’ on backstage, you know the stage is gonna be hot with the overflow.” 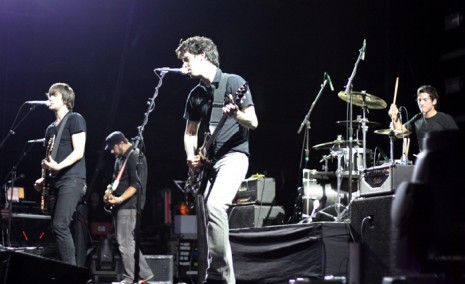 House of Heroes was a true opening act, starting their set early while most people were still filing in. They only played for about 20 minutes, sticking to songs off of The End Is Not The End. “Lose Control” with its insistent power chords got people to turn and look as they streamed past to their seats. People couldn’t resist swaying along to the shuffle beats of “If.” Their performance was interesting and engaging, if a little awkward since they were in the middle of a wide stage with all the lights on and daylight lighting up the seating areas. I’d like to see them get the full stage treatment on their next arena tour. They seem to have the high-energy stage presence to handle it but were handicapped by their setup. 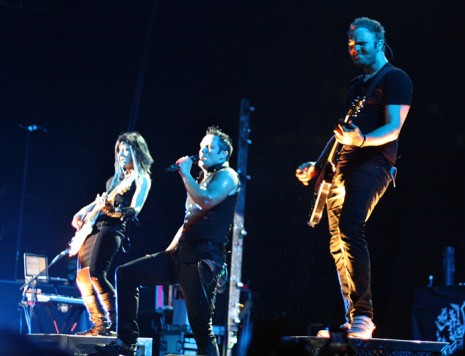 The first of the two co-headliners – the Awake part of the Awake Tonight Tour – Skillet came out with their hit “Hero,” backed by a stage full of pyrotechnics and laser lights. Frontman John Cooper and guitarist Korey Cooper traveled from one end of the stage to the other, engaging the fans in the pit up front. Two songs from Comatose followed, “Whispers in the Dark” and “Those Nights,” during which John brought out a video camera and asked the crowd to say hi to YouTube. It was pretty funny to watch John try to sing and film at the same time. 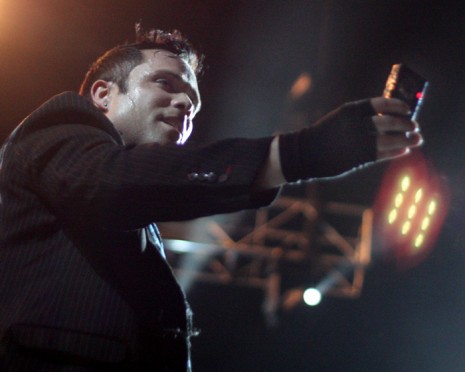 A violin player and a cello player came out for the next song, “Awake and Alive.” Korey and guitarist Ben Kasica climbed atop two lighted hydraulic platforms that went up and down on either side of the drum kit. John explained the song as about the war for your soul, where the world tells you that believing in Jesus is a waste of time but the Bible tells you to not be ashamed of your faith. A good indication of the band’s live show can be found in their video for the song. Drummer Jen Ledger’s vocals provided a good counterpoint to John’s gravelly shouts. She and Korey traded duties when female vocals were called for, Korey singing on older material and Ledger handling anything from Awake. John and a fill-in bassist also split the bass duties, each playing on about half the band’s 12 songs. This was the first time I’ve seen John only do vocals, but it allowed him to move around a lot more and add to the energy of the performance.

The band left for a costume change and John picked up an acoustic guitar, told a few jokes and got everyone to sing along as he covered dc Talk’s “Jesus Freak” and Sarah McLachlan’s “Angel.” The others returned for the love song “Believe” and “The Last Night,” where Kasica soloed on the neck of his guitar with an assassin-like straight face, an effect helped by the band’s all-black attire which let the stage effects do the showing off. He broke a quick smile as he threw a few picks to the outstretched hands. 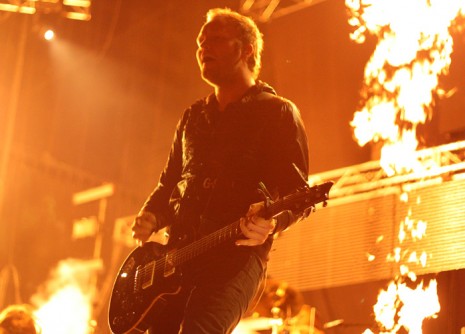 The lone older song of the bunch, “Savior” off Collide, was next, allowing them to cut loose in the heavy contrast of the chorus from the mellower verses. John leapt from an amp and Korey shook her blue-highlighted dark hair, which shone amid the red fireballs going off onstage. John and the cellist staged an intense bass/cello duel during the solo section. 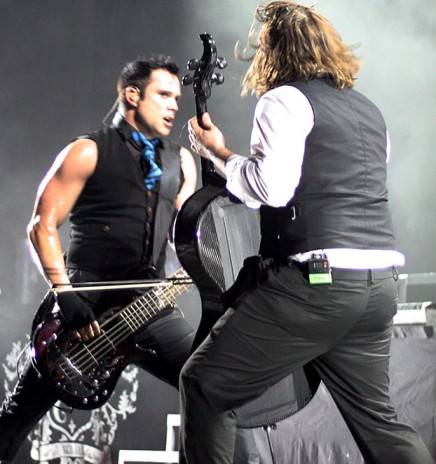 The popular “Monster” was next, followed by “Lucy.” John screamed out the high parts and sounded pretty good and natural, which was a pleasant surprise given how raspy he’s getting. Giant spinning sparklers and smoke pillars on either side of the stage went off as they closed with “Rebirthing,” giving a definite Fourth-of-July smell. Skillet has noticeably embraced the arena-rock vibe, but they use all the effects to their advantage to accent their music. 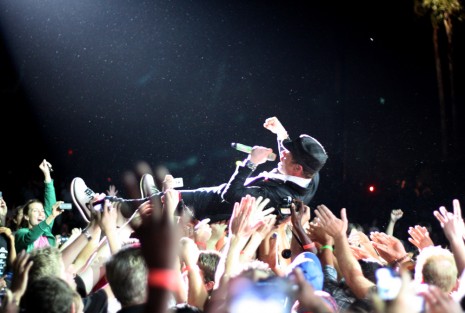 TobyMac is definitely a showman. He opened his hour-long set nowhere to be seen as his 10-person backing band took the stage in front of the terraced LED-lighted backdrop. John Cooper took the mic as the song began, then pointed out into the audience where the spotlight followed TobyMac as he crowd surfed up to the stage. From there, the set was mostly one continuous song with few breaks, contrasting with Skillet’s style of longer breaks between songs. “I’m For You” flowed right into “Showstopper” which got everybody in the pit at the front bouncing. Toby and his backing band Diverse City (a beatboxer, two singers, two keyboardists, a drummer, two guitarists and a hype man in all) filled up the stage, dancing and dancefighting in unison at times. 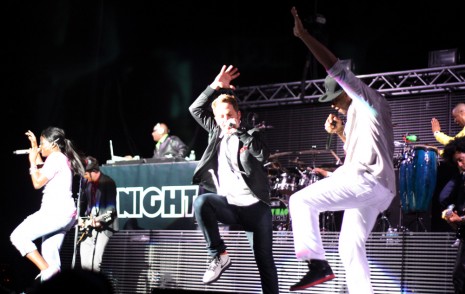 The first slowdown was the worship song “Lose My Soul,” featuring alternating verses sung by his male and female backup singers. A few more uptempo songs later, Toby left the stage and Diverse City kept the crowd pumped up. All eyes then turned to the back of the amphitheater, where Toby and an acoustic guitar-wielding Ben Kasica stood on a ballroom-lit platform. Toby led a “Pants on the Ground” clap-along, then read John 1:5 as an intro to dc Talk’s “In the Light.” McKeehan’s voice isn’t the same as it was when the song was released 14 years ago and he had some trouble with a couple high parts, but the crowd showed off the impressive amphitheater acoustics with their support. He ran back to the stage and played two more upbeat songs, showing off his dancing skills for the two fans who won seats on the side of the stage. After a final break, a video with clips from 9/11 and Hurricane Katrina accompanied “City on Our Knees,” which was more powerful live than in its overproduced studio format. They ended with the popular “Burn For You” and a “Jesus Freak” / “Na Na Hey Hey Kiss Him Goodbye” medley, during which cannons shot confetti into the crowd and TobyMac finished by leaping off a springboard into the sea of arms. 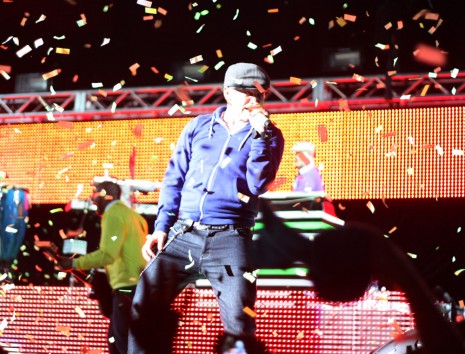