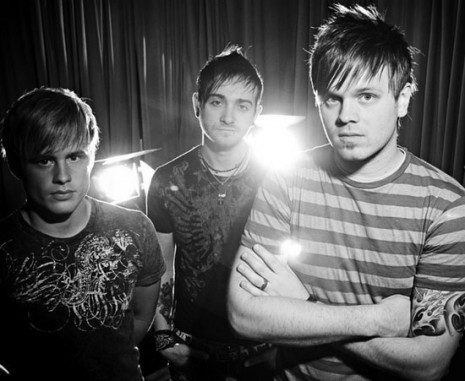 RIYL:  “Always a hard question to answer. Maybe a mix of Coldplay, Maroon 5 and Fall Out Boy.”

What’s one of the most memorable things (either good, bad or funny) that’s happened at one of your shows?

“One time we played this show for a college Bible study that was held in the building of the local brewery.
We were setting our gear up when a few of the pipes burst. Beer went all over us and our gear.
It was funny yet horrifying at the same time.”

If you could ask God one question, what would you ask Him? “We would ask Him where He came from.”

Name 3 bands that, had they not released a certain album at a certain time … you would not exist as a band. “Derek – The Beautiful Letdown by Switchfoot; KC – Reset EP by Mute Math; Chad – Who We Are by Lifehouse.”

If there was another band and another album that you could give everyone as a present for Christmas, what album would that be? Why? “Steven Seagal – Songs from the Crystal Cave. This is because underneath all of those face punches and arm breaks, we always knew there was a soft heart. Ha ha.”
If there wasn’t music, what skills would your members use and what would they do? “Derek would be a graphic designer, KC would be in film production,  and Chad would work as a machinist for his family business.”

If you had a chance to perform for most of the televised world and play just one song, which song would you play … and why? “Probably the song, ‘Catch Me’ that is on our new album, because it has more of a mass appeal.”

What is one belief, conviction, idea or passion that you honestly think might’ve been deposited inside you or given to you by God? “Being a follower of Christ, we want to strive to be like Him. Our whole lives, especially as Americans, we struggle with being selfish. For us, we try to focus on helping others who haven’t been as fortunate as us. We partner with two organizations – Compassion International (compassion.com) and She Dances (shedances.org). If we can make an impact on someone else’s life, then what we go through has all been worth it.”

What’s the best video on YouTube (what would the keywords to search for it be)? ”Clap On Beard.”

What’s a secret or little-known fact about your band (or one of your band members) that would make you the darlings of the music world if we all knew it? “We all really love kids. (Derek) My 2-year-old travels everywhere with us and the other guys are like family to him. They take care of him as if he was one of their own.”

What’s one question you’d always wanted to be asked in an interview? “Well, we know a question that we don’t want to be asked and that is ‘Are you guys from Ohio?’. We have been asked this a million times!”

If a super surgeon removed all of your emotions and the ability to feel any emotion for the rest of your life, which one or ones would you most want to have back? Why? Empathy and hope. If you can’t relate to how others feel or have the hope that one day things will be better then life would be pretty empty.

In 4 sentences or less, explain how your band came to exist. We started as the worship band at our church. I ( Derek) felt like God was giving me songs that were more suited for what we do now. We all prayed about it and started Ohio Avenue.

If there was another band and another album that you could give everyone as a present for Christmas, what album would that be? Derek – The Beautiful Letdown by Switchfoot, KC – Reset EP by Mute Math, Chad – Who We Are by Lifehouse