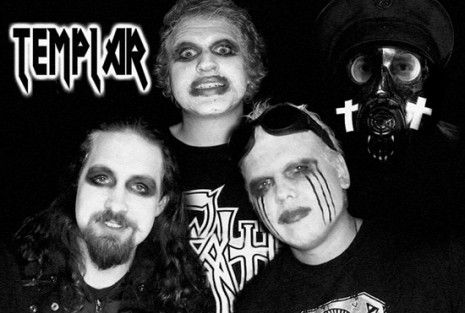 Completed by Dan Yohann of TEMPLAR…]

Name 3 bands that, had they not released a certain album at a certain time… And you would not exist as a band.

Stryper – To hell with the devil, the first metal album I bought and still love it

Whitecross – 1987, I heard Rex Carrol play and knew that I just wanted to play guitar

Anything by Bride – Bride is where Ralph and I first connected with music and metal.

If there wasn’t music, what skills would your members use and what would they do?

I don’t know what everyone else would be doing, but I would use my incredible skills to fill out unemployment forms coz music is all I know and do!

When asked to describe your band by comparing yourself to others (the dreaded “Recommended if you like” question), who would you list?

I would hope bands like Killswitch Engage and Shadows Fall as these are bands that have both power and melody with great production and that rocks my world and is what I strive for.

What’s a secret or little-known fact about your band (or one of your band members) that would make you the darlings of the music world if we all knew it?

If there was another band and another album that you could give everyone as a present for Christmas, what album would that be?  Why?

Any Killswitch Engage album for the above mentioned reasons

What is one belief, conviction, idea, or passion that you honestly think might’ve been deposited inside you or given to you by God?

Just play guitar, don’t worry about anything else just play ya guitar

What’s one of the most memorable things (either good, bad, or funny) that’s happened at one of your shows?

I played a show at a club, it was packed, we started playing and because we were a metal band the sound guy thought we wanted it really, really loud so he turned it up. Three songs in, there wasn’t anyone left because people needed to get treatment for bleeding ears. Not our best gig.

If you had a chance to perform for most of the televised world and play just one song, which song would you play … And why?

If a super surgeon removed all of your emotions and the ability to feel any emotion for the rest of your life, which one or ones would you most want to have back? Why?

Is freedom an emotion? Coz that’s what I like feeling

If you could ask God one question, what would you ask Him?

Just who are you…no really who?

What’s the best video on youtube (like, if our readers had to type in a word or a few to search it, what would the keywords be?

If someone came to you and said, “Hey! I need to make some changes in my life…Help me out! I’m going to take one piece of advice from you and apply it to my life and/or make it a habit for 30 days. What would that piece of advice be?”

Have only the people in your life that you want in your life, the people who allow you to be everything that you can be.  The rest will try to make you someone else for their own gain.

In 4 sentences or less, explain how your band came to exist. (and give us a date)

Nov ‘06, Ralph and I ran into each other after many years at a Mortification concert and he was starting something new and I also wanted to.

What are your names, instruments, album titles (or song titles if no albums recorded), and location/hometown.

What is the release date of your next (or latest) album? Or what is the next big date on your band’s calendar?

What’s one question you’d always wanted to be asked in an interview? (and please provide your answer)

What color socks are you wearing?