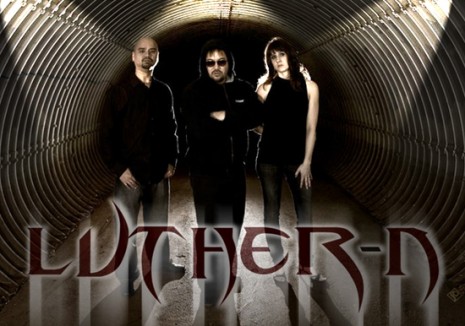 1.     Name 3 bands that, had they not released a certain album at a certain time… you would not exist as a band.

2.     If there wasn’t music, what skills would your members use and what would they do?

3.     When asked to describe your band by comparing yourself to others (the dreaded “Recommended if you like” question), who would you list?

Mix Def Leppard with a little Depeche Mode and Human League and Korn, add John Sykes and the theology of Martin Luther and John Calvin

4.     What’s a secret or little-known fact about your band (or one of your band members) that would make you the darlings of the music world if we all knew it?

We write our own songs.

5.     If there was another band and another album that you could give everyone as a present for Christmas, what album would that be?  Why?

6.     What is one belief, conviction, idea, or passion that you honestly think might’ve been deposited inside you or given to you by God?

7.     What’s one of the most memorable things (either good, bad, or funny) that’s happened at one of your shows?

8.     If you had a chance to perform for most of the televised world and play just one song, which song would you play … And why?

“Reformation” – We see that a “new reformation” is needed in our culture.  The Moralistic Therapeutic Deism (coined by Christian Smith) is rampant in our world hindering the efficacy of the Gospel.  This is causing us to have similar issues in our culture that were seen by our beloved reformers.  The re-implementation of the five “solas” is the call for our time.

9.     If a super surgeon removed all of your emotions and the ability to feel any emotion for the rest of your life, which one or ones would you most want to have back? Why?

Sadness – Then I could write really popular songs

10.   If you could ask God one question, what would you ask Him?

11.   What’s the best video on youtube (like, if our readers had to type in a word or a few to search it), what would the keywords be?

12.   If someone came to you and said, “Hey! I need to make some changes in my life…Help me out! I’m going to take one piece of advice from you and apply it to my life and/or make it a habit for 30 days. What would that piece of advice be?”

My advice would be.  You don’t need “good advice”, you need “good news”.

After my time with Junker Jorg, I thought I would not play in a band anymore, but the passion and desire to record a different sound and to write lyrics pertinent to the reformation of our culture kept burning.  I enlisted Jeanine and called, who in my opinion, was the best metal guitarist in Hawaii and asked if he would like to record a CD with us and the rest is history.

14.   What are your names, instruments, album titles (or song titles if no albums recorded), and location/hometown.

15.   What is the release date of your next (or latest) album? Or what is the next big date on your band’s calendar?

Nothing on the calendar at this time

16.   What’s one question you’d always wanted to be asked in an interview? (and please provide your answer)

What color is your guitar?
Black