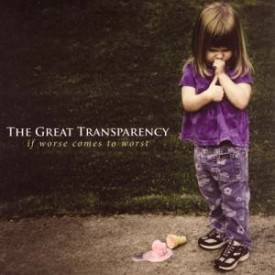 Razzbarry Records is the Management Company / Label of industry veteran Barry Blaze, which is currently home to his band Code of Ethics and his solo projects.

“We are so excited To be working with The Great Transparency. These talented young men have a healthy work ethic to go with their heart to share Hope to people in what can be a very difficult world,” says Blaze.

It is this work ethic that has already found them touring the country with national acts like Eleventyseven, Manic Drive, Hello Kelly, and Me in Motion, while also becoming very familiar faces at popular Summer festivals, such as Cornerstone, Ichthus, Prolife and Rockfest.

The Great Transparency started as a side project for Jeremiah Wagner,and Tommy Clingan, soon adding other members  Jameson Leasure, Kyle Bigham and Ray Bertka. Playing over a 100 shows a year, they have sold 2,000 copies of their self-released EP, If Worse Comes To Worst,  featuring the single “Run For It,“ which was produced by Grammy and Dove award winning songwriter and producer Barry Blair (known for being a founding member of Audio Adrenaline).

With almost 2,000 copies sold independently, it is no wonder they have already seen radio play on stations such as Yes FM, Remedy FM, Power FM, WBEL American family radio and even garnering three days as the winner on Radio U’s Battle of the Buzz.

But it’s their love for people that keep them pushing ahead, “There has been no greater time than now, in these turbulent and uncertain times, to go out, encourage and reach people of all ages where they are with this message.  It’s the Hope that can only be found in Jesus Christ,” says TGT front man Jeremiah Wagner.

ABOUT THE GREAT TRANSPARENCY
The Great Transparency  (Columbus, Ohio) is a Power Pop group that that is the latest signing of Razzbarry Records consist of band members Jeremiah Wagner, Tommy Clingan, Jameson Leasure, Kyle Bigham and Ray Bertka. They have toured the country playing over 100 shows a year  while independently selling almost 2000 copies of their latest EP, If Worse Comes To Worst.

Make sure to see them at a show near you. For the latest information on the band, visit Myspace.com/thegreattransparency,  twitter.com/tgtband or The Great Transparency on facebook