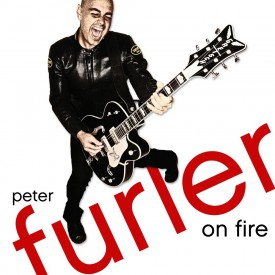 With multiple GRAMMY nominations and Dove awards, “Songwriter of the Year” nods and musical talent that has driven the sales of five RIAA Certified Gold records, over seven million albums sold and 25 No. 1 songs, Peter Furler returns to music after ending his long tenure in 2009 as the lead singer of newsboys, the band he founded in Mooloolaba, Queensland, Australia.  Refreshed and reawakened to the joy of music, Furler steps out with his first solo album, ON FIRE, releasing June 21 on Sparrow Records.

After amicably leading newsboys through its transition to the current lineup, Furler stepped away from non-stop touring, sold much of what he owned – cars, home, his shares in Inpop Records, a label he’d co-founded in 1999 that launched the careers of such notables as Newworldson, Mat Kearney and Shane & Shane, among others, etc. – moved to the Gulf of Florida and took time to reflect, express himself through visual art, surf and play music just for pure enjoyment.

“I didn’t have a clue what I was doing next,” Furler reflects. “I’d been doing 100-plus shows a year, writing, then finishing a record for more than a decade. It was good, but it was a merry-go-round that was never going to stop.

“Artistically and creatively, I began to see that God didn’t make the horse to win at the races, but for his pleasure – to watch it run,” continues Furler.  “I had a definite yearning to get back to nature, to express myself creatively, to do something just for the joy of it.”

Although initially not planning to release any of the new music created during this time, the result of this redefining period led to the most joyful and uplifting music of Furler’s career.

“The songs never really stopped. They kept coming,” Furler says. “I’d take a long walk, and a song would come into my head… There is a fire shut up in my bones that I have not been able to hold in since I was a child. For me, I find its release through melody and testimony.”

Furler’s music has always been about making a difference and leaving the listener encouraged, and with these new songs comes a sense of confidence like he has never experience before as a singer.  Music fans are already catching a glimpse of the rejuvenated Furler as his first radio single from ON FIRE, “Reach,” is already a Billboard hit single that continues to rapidly gather national airplay as it goes for sale on iTunes today (http://is.gd/bG1V0J).

“We all need to be reminded that God is personal,” Furler says as “Reach” struck a very personal chord with him. “The One who created the heaven, the One who is everywhere and all knowing yearns deeply for us… He cares for us individually, where we are.”

Writing, producing, recording and singing such international classics as “He Reigns,” “Shine,” “Something Beautiful” and “It is You,” Furler is one of Australia’s biggest exports of any musical genre. With a raw honesty and ability to turn a rock show into a deep worship experience, Furler is a favorite on the touring circuit.  He has collectively performed to over 15,000 Muslims in Morocco, for the Pope during World Youth Day, at the Rock and Roll Hall of Fame, at a  9/11 service for U.S. military leaders at the Pentagon, at a New Age festival on the shores of Galilee in Israel, and rocked the punters at an outback pub in Australia.

As one of the most successful, award-winning artists today continues his musical journey, more information on the new album and upcoming tour plans will be revealed soon.  For all the latest activity, see http://peterfurler.com, www.facebook.com/peterfurlerofficial.