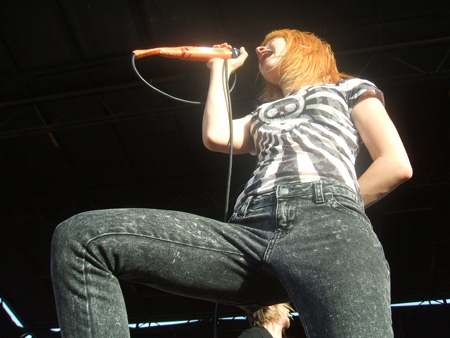 Pop-punk band Paramore from Franklin, Tennessee kicked off their sold out UK tour with a date in Nottingham.  2010 really has been Paramore’s year. Their fan base has grown considerably after the release of third album Brand New Eyes, which has gone platinum in the UK. The band have also headlined the Honda Civic tour, and played on the main stage at Leeds and Reading festival. And to add to all that, they gained even more momentum by winning their first MTV award just one day before the UK tour got underway as they took home Best Alternative at the MTV European Music Awards.  As you would expect, the audience had very few members past their mid-20s, all of whom were in awe of front woman Hayley Williams, who made a quick appearance joining B.o.B for their hit”Airplanes”; before Paramore took centre stage. Spotting girls basing their image on Kerrang Readers’ poll’s sexiest woman was not difficult, and spotting men seemingly obsessed with her was just as clear-cut, with frequent yells of “I love you”; which Hayley subtly acknowledged.

Georgia-based rapper B.o.B’s set went down pleasantly well with the Paramore fan-base, and warmed the crowd up for the cardiovascular workout that was to follow. This workout came in the form of Hayley Williams, who marshalled everybody in the arena throughout the course of the 90 minute set, beginning with the muscular “Ignorance”;, and followed up with the equally angry “Feeling Sorry”;. &”That’s What You Get”; and “;For a Pessimist, I’m Pretty Optimistic”; from the band’s second album Riot!; then followed, to a rapturous reception, before even further nostalgia as they rocked “Emergency”; from the debut album released in 2005. Hayley then introduced the group’s latest single &  “Playing God”, one of the band’s strongest songs lyrically. “Decode” was up next before the dehydrated audience were given a much needed breather and recuperated their energy as they were given a 4-song acoustic interval, beginning with Hayley and her band-mate and ex-boyfriend Josh Farro paid tribute to their hometown with a Loretta Lynn cover. Josh’s younger brother  Zac, bassist Jeremy Davis and newest member Taylor York then rejoined them for the mellow anthem “When it Rains”, which was the most calm and joyful moment of the night. “Where the Lines Overlap” and “Misguided Ghosts” concluded the acoustic set before red-head Hayley ordered the crowd to dance to the next track, as she promised “I’m going to make sure you get all sweaty”, before belting out “Crushcrushcrush”. 21 year old Williams continued her crowd interaction, asking questions which encouraged reactions, as well as welcoming those who were at their first Paramore gig to the family.  “Pressure” was dedicated to the long-term fans of the band.
Halfway through this, incidentally their first single, Hayley introduced the other band members, all of whom got a great reception from the Nottingham crowd, but no reaction compared to the one Hayley got when introduced by lead guitarist Josh, before Jeremy leaped over Josh and the five-piece picked up where they left off. “Looking Up” was the penultimate number before the encore, as ballad “The Only Exception” forced every lighter and cell phone to come out of the pocket, and pyro to make the experience even more attractive. The band then left the stage, as chants of “We want more” emerged. They duly obliged, coming out and playing “Brick by Boring Brick”, which instigated a mosh pit for the first time on the evening.   Hayley then had “one more piece of business to take care of”.
The band’s biggest hit “Misery Business” then closed the set. Two members of the crowd were invited to take to the stage and perform with the band, a young girl took lead guitar, and another woman took the microphone in what was a heart-warming moment, and an incredible spectacle as confetti filled the arena and the band bowed farewell.  Every member of the young crowd went home happy, as many headed for the merchandise stalls after the show, still on a high from what was a riveting evening. There is no reason why any youngster should not enjoy the live atmosphere and experience that comes with a Paramore gig. Whether it’s front woman Hayley Williams, who it is difficult to take your eyes off as she works the stage, the sound of the guitar riffs that echo throughout the arena, or whether you just have a lot of energy to burn, it is something you won’t forget in a hurry. Paramore aren’t going away anytime soon, and are growing in stature as each tour and album progresses.