My Aim To Farewell 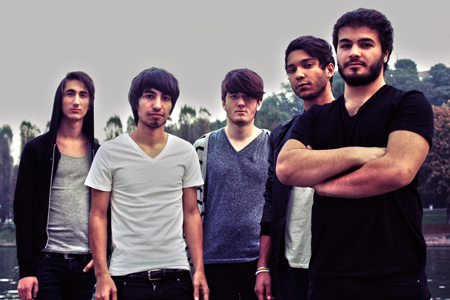 The other night I was surfing through Myspace looking for interesting bands. You know the routine, find a band, have a listen, then check out their friends…which happen to bands, have a listen, and so on. I came upon a band from Turn, Italy called My Aim To Farewell. It only took a few minutes of listening to grab my attention. I wanted to know more about My Aim To Farewell and what the hard scene was like in Italy. I shot off an e-mail to the band and was immediately contacted by front man Giovanni Chiricosta. It seems that in Italy, like the rest of the world, the hard music scene comes from an underground culture and is held together by a brotherhood of musicians and fans. Here is a transcript of the interview.

Tell me about the heavy music scene in Italy. Is it an underground culture?

Yes, I am pretty sure about that. There are lots of bands, and people love
being at concerts.Actually I can say that bands help each other, have a great support from friends and
family, and cooperate to improve our scene.This brotherhood goes beyond the musical aspects, because we are not only “colleagues”, but all friends and bros, following the same dream. As a matter of fact, we’re in the same
difficult situation, and this is the only way to carry on with our hope.

How did you guys first get involved with this type of music?

I guess it began many years ago, thanks to my ex-musician uncle. I was 10.
When you’re growing up you try to mature your personality, and music is one of the most important aspects, I think.
At the end you choose, and the path you travel will be the same all life long. I’d rather say this is an
innate capability, and everyone who has it, will sooner or later reach it.

What bands have inspired you? Who do you listen to?

Well, there are many. I think the most important one is definitely August Burns Red. Thanks to them we’ve begun to play together and to write songs. Our preferences are many, though. We move from the modern hardcore to the experimental metal, from metalcore to post-hardcore. What we really like is to explore the Internet looking for new bands worldwide.  We’re interested in the “underground”, the so-called not-monster-bands especially from UK and US. We keep in touch with most of them, and hope one day we might play together.


A lot of metal and hard bands seem to develop a theme upon which they build a band personality. These range from “rage and revenge” to” faith in God.” What drives My Aim To Farewell? How do you want fans to identify with the band? Music is passion. So we just follow our heart and convey our instinctive feelings with the music we write and play.
We do not hide behind an “advertising” cover, and do not be part of trends. Our fans may translate our lyrics and style as they prefer, but we’ll always be My Aim To Farewell.

If you could choose the future of the band, what would it be?

To tour worldwide. To live abroad, where musical possibilities are bigger. To play every single day and live with music.
This may seem a bit trivial and restrictive, I know, but it’s simply that.

I take this opportunity to thank you Jim for the chance you gave us, and thank every single person who believes in us and support. Cheers from Italy!

Be sure to check out My Aim To farewell at myspace.com/myaimtofarewell