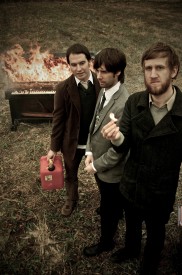 Without a proper record label, the alternative rock group MAE found themselves with no limitations, which inspired the band to find a way to do the two things they love most: creating music and helping others. The Virginia trio–DAVE ELKINS (lead vocals/guitars), JACOB MARSHALL (drums) and ZACH GEHRING (guitar)–is in the midst of a social movement they call “12 Songs, 12 Months, 1 Goal: Make a Difference,” whereby the band is releasing three separate collections of music–(M)ORNING, (A)FTERNOON, and (E)VENING (physically and digitally)–and partnering with charitable and humanitarian organizations to make a direct and positive impact. So far, MAE has raised $50,299.50 in 2009.

First up, after their limited edition printing sold out, MAE will officially release (M)ORNING, in stores September 22 via the band’s own imprint Cell Records which is now in partnership Tooth & Nail. MAE has teamed up with their former label Tooth & Nail to distribute the three releases. (M)ORNING includes the original eight songs in addition to a special DVD documentary which portrays how the group developed the “12 Songs, 12 Months, 1 Goal” campaign and follows them achieving their goal of making a positive impact in the world.  A limited edition version of (A)FTERNOON will also be available during the band’s fall tour—only 2500 copies of the tour-only edition–and includes eight new songs MAE recorded on their spring tour earlier this year, including their current single “The Fight Song (Crash and Burn).” Individual songs for (M)ORNING and (A)FTERNOON are also available for download with a minimum donation of $1.00 through the band’s official website http://www.whatismae.com/ which has allowed the group to raise funds for charitable causes. Fans can listen to the songs streaming for free at www.whatismae.com .

MAE first stepped into their local community of Newport News, VA–in conjunction with Habitat for Humanity–to build a home for a family in need. The trio fully funded the single family home through fans purchasing the new music available on www.whatismae.com. For (A)FTERNOON, MAE has aligned with Donors Choose (www.donorschoose.org). This organization helps teachers across the country directly get the supplies they are lacking for their classrooms. “We’re thrilled to team-up up with Donors Choose,” explains GEHRING. “There are so many schools and teachers around the country whose budgets are slashed. The education of young people shouldn’t be compromised due to problems they have no control over. Every child needs and deserves a proper education.”

In addition to donating proceeds from their music sales, MAE will also donate their time along the way.  They will participate in local community outreaches at every stop of the fall tour.  Before each show, the band–along with their local fans known as the “Maeteamers”–will volunteer at local community serving events such as soup kitchens, homeless shelters, clothing and food drives, etc. After each show, MAE will perform an acoustic set for donations, all of which will go directly to the local chapter of Donors Choose. Their mission is to impact a school in every state in the country.

This fall, MAE will launch their U.S. headlining tour beginning September 24 in Carrboro, NC and wrapping November 28 in Honolulu, HI. Newcomers Deas Vail will join on the full run, with Locksley and Jenny Owen Youngs revolving in the opening support slot.

Although music has always been the fundamental means of their expression, MAE’s greater purpose has always been to provide something more–a Multisensory Aesthetic Experience designed to cultivate growth and welcome possibility. That purpose, embodied in the band’s name, permeates everything they have done and everything they continue to do. For the (A)FTERNOON tour, the trio will now incorporate the sensory stimulation of touch into their shows in addition to their stunning 3D projection visuals and “rub and smell” scented CDs–the (A)FTERNOON tour-only edition will feature a new scent–which first debuted on the Spring tour.  The combination of these elements will create a unique experience allowing fans to be transported to another level.

Catch MAE on tour in the following cities: