I Am Alpha And Omega 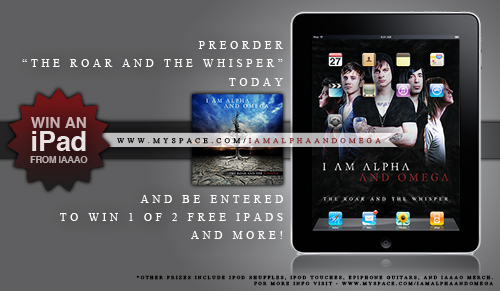 I Am Alpha And Omega (iaaao) are like a machine. Besides working their butts off in their local scene (in and around New Jersey), they have divided up band chores and duties amongst themselves, financed their new album and are planning on going all out with promoting it with touring, advertising, contests and more touring.

How did you approach this new album release?
We wanted this record to be purely an offering of obedience and reverence to the Lord. We all personally have gone through a season of challenge in our walks. For me personally, it was feeling disconnected from God for a while. I just felt like I had no idea where I was with Him; just completely lost. The Lord has completely restored me and showed me just how huge His measure of love for us really is. That dark time proved to be such amazing fuel and drive for this record. It just amped up everything. This album is worship, but coming from a different direction, and musically, it follows in that same vein.

From the beginning of the writing process to the last day of mixing the record, we were patient and really tried to take our time with everything. We went back into the studio with Dave Swanson (Life in Your Way, The Frozen Ocean). Working with Dave is such a blessing, because we just click. He knows exactly were we are coming from musically. We also had the record mastered by Alan Douches (A Day to Remember, Zao), and he I think understands our genre more than most.

How does it feel to be asking others to help you do what you do (as opposed to the “independent spirit” that pervades rock n roll)?
I think in a lot of ways, its not only freeing, but humbling. Because so many people are involved in your band at the ground level, it reminds you furthermore that you really rely on the Lord for provision. Also, it makes everything you do a sort of a “collaborative” effort between you and fans.

What are your goals for the year?
Our goals are to tour over 200 days, really push ourselves individually and as a whole ministry to serve in new ways, really pushing ourselves to a new level on all fronts really. I think our new full length The Roar and The Whisper has brought us so far beyond where we were, musically and spiritually. The whole process was so intense and its success was really based upon how much we were willing to work.

What have been some of the most tragic, heartbreaking things you’ve seen in your scene or local music region or at one of your shows?
There is heartache at so many shows. I mean, you hope in most cases, its merely an opportunity for the Lord to work, but sometimes, you just don’t get to see that. There was a show out in CA, with Austrian Death Machine, and unfortunately a few kids in hardcore crews absolutely destroyed this one kid. The show was cut short and the community around just had such a bitter taste in their mouth about our scene. There was another instance where some anti-God crews got upset because one of the bands they came to see could not speak on behalf of the atheists in the crowd. Unfortunately, the venue felt uncomfortable and asked them not to share, due to their bad attitudes. Long story short, fights broke out and the police were called. Looking back, understanding and compassion may have prevented all, but there was a lot of anger in that room. I think at that point, people are hurting, and where there’s pain, there’s anger. Jesus used love, compassion, and truth to speak into peoples lives. I think that’s a great place to start, if we are going to make a difference.

How would you describe the changes in sound from your previous recordings to this new album?
Even before we started writing and really putting the pieces together for The Roar and The Whisper, we knew a few things were going to prevalent. We knew this would be the heaviest and the softest music we had ever written. Then when the Lord gave us the album title, which has multiple meanings, we took it as a sort of confirmation. Our individual tastes in music vary so much that in most cases, we wouldn’t be in a band together. But we decided to embrace our differences and use them to create worship, which we do agree on. There are tracks that are brutal and there are tracks that are ambient and more interpretive. I think overall, despite the diversity, there is a passion and drive that runs through and hopefully pulls everything together.

Which songs are hardest to perform? Why?
Well, we are just getting into the groove of rehearsing for the busy touring schedule in front of us, but so far i would say there are several tracks that have a lot new time signatures for us. Also, due to the increased diversity, just finding a comfortable flow amongst are set will be mildly challenging, but in a really fun and exciting way.

What have you told people when they asked you about naming your band after God?
Basically, this band wanted to be Christ centered from the start. We didn’t know the depth He would take us when we started playing, but we knew what we wanted as our cornerstone. We picked “I Am Alpha and Omega” first because we wanted to remind ourselves of our purpose and that God must be first. Secondly, at the time, there weren’t that many “I Am” names, and we thought it stood out. Haha.

How can someone book your band to play?
Even though we are currently looking to link up with a booking agent, contacting us at iamalphandomega11@gmail.com or our family at Come&Live! is the best way to get in touch with us regarding booking.

What is your affiliation with Come&Live! ??
Come&Live! is our family, our counsel, and our label, all at once. They have been lovingly involved with us over a year now and one of the main reasons we have grown to the point that we have. They are always there, whether it is spiritual help or band stuff. They are such a huge part of us and we are so blessed to call them and the other bands family.

Why have you forsaken label interest at this time (at least in the standard sense)?
Basically, the Lord has called us to something beyond the current state of the industry. We obviously need blessings and financial support to continue, but when you cut out most contracts and industry games, you can be more fiscally responsible and transparent. If the Lord ever wants us to change directions, he will open those doors. But for now, we feel called to focus on our ministry as a whole and the music we play.

Anything else you’d like to add?
We want to thank HM magazine for providing decades of support and coverage to this scene. We also want to thank everyone else who has supported us, prayed for us, listened to us, or come out to a show. There are so many new things in the pipeline. Keep your eyes tuned to us and check out Come&Live!