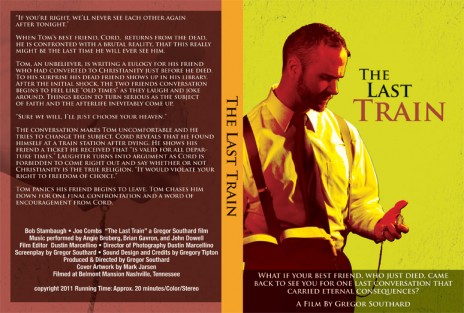 Gregor Southard has just announced the release of The Last Train, a faith-based, short film, which is now exclusively available on DVD at http://www.gregorsouthard.net.

“I’m excited about the release of The Last Train, because I believe it can impact our world with a relevant, life-changing message,” said writer Gregor Southard. “I think many of us can relate to the main characters and the decisions they face.”

He said that the purpose of the film is for Christians to understand how important it is to share their faith with others and for non-believers to begin to comprehend why their Christian friends and family think its so vital that they accept Christ.

Written, directed and produced by Southard, a Topeka, Kansas native, The Last Train was shot entirely on location at Belmont Mansion in Nashville, TN. The 20-minute film stars Bob Stambaugh and Joe Combs. Dustin Marcellino serves as the editor, Gregory Tipton of BigPixture Productions did the sound design and credits, and Patrick Sittnick acts as gaffer.

As a profound and creative writer in today’s culture, the story Southard tells evolves around a man who is writing a eulogy for his best friend when his friend shows up. The impending conversation will determine whether they will ever see each other again after tonight.

When Tom’s best friend, Cord, returns from the dead, he is confronted with a brutal reality that this really might be the last time he will ever see him.

Viewers can expect to be challenged as Cord and Tom exchange thought-provoking dialogue throughout the film. “If you’re right, we’ll never see each other after tonight,” declares Cord.

Music for the project features Angie Broberg, Brian Gavron and John Dowell. The Last Train DVD may be purchased exclusively at http://www.gregorsouthard.net for $10 (plus shipping and handling.)

Additionally, Southard is the author of five books. He has also released an audio book and a progressive rock CD. A few of his previous titles include: The Immortal Present, Art Before Artist and Soul Narratives, among others.

Southard earned a BA in Theater from the University of Kansas and a BA of English Literature from Western Kentucky University. When it comes to writing, a few of his primary influences include GK Chesterton and C.S. Lewis. In his spare time, he enjoys diverse styles of music, basketball, bowling, bicycling and spending time at the beach.

Watch for the film’s premiere to be announced soon. For more information, or to purchase a copy of The Last Train, visit http://www.gregorsouthard.net. – Submitted by Ginny McCabe