Grave Robber To Release Collector’s Edition of “Be Afraid” 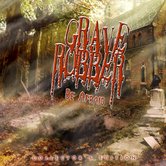 We are announcing the release and immediate availability of GRAVE ROBBER – “BE AFRAID” (Collector’s Edition) on Retroactive Records! This horror punk/metal/shock rock classic comes packaged in a full color four panel digipak (with a tray), and an additional bonus track, the Nazareth cover tune “Love Hurts” for  this Collector’s Edition release!

If you like your gothic/shock rock spiked with a little arsenic and a healthy dose of dark humor, check out Be Afraid!  Band members, Dr. Cadaver, Nameless and Maggot offer you chainsaw guitars, super-tight arrangements and blatant morbidity wrapped around insanely catchy choruses, while Wretched provides elite vocal skills in mesmerizing Danzig/Rob Halford fashion! Their theatrical stage show and GWAR-like costumes lets fans know that this is not your everyday band.

Formed in 2005, these devil’s rejects arm themselves with sonic vibratory executions and images of horrific realities, bringing an onslaught of sound and warning that will ring into eternity. Rest assured, you will be afraid…you will be very afraid!  Fans of Rackets and Drapes, The Misfits, Alice Cooper, Type O Negative, Gwar, Kiss, Danzig and Rob Zombie will find themselves feeling as though they’re strolling into familiar musical history, yet simultaneously wading through a dense mire of uncharted territory. There’s nothing more terrifying than the unknown. Grave Robber is the one band that can hold your hand on a decidedly horrifying romp, leading you safely to the other side.  Heed the call of Grave Robber: die and escape the grave or die eternally.

The band’s name references Jesus’ return as the true grave robber, when Christ’s followers will be “raised as incorruptible and shall be changed” and “death is swallowed up in victory” (1 Cor 15:52, 54). While in church one evening, the message of Romans 6:11 (consider yourselves to be dead to sin but alive to God in Christ Jesus) was preached just prior to communion.  This concept of being “dead” to sin and symbolically eating the flesh and drinking the blood, coupled with a passion to reach a people who are largely ignored by the church, sparked a flame in the hearts of the members of Grave Robber to begin this unique ministry.

This four panel digipak is the re-release of the 2007 jewel case version. It features different cover art and the unreleased bonus track, “Love Hurts” made famous by both the Everly Brothers and Nazareth (exclusive to this release).