Skyler Payne is a Houston area photographer with a love for live music. Around age 11, his parents started taking him to local punk shows that warped his mind forever. His greatest pride is creating awesome images for the bands he saw as a child. 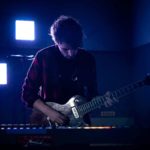 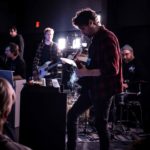 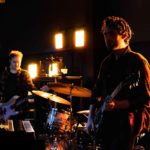 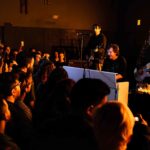 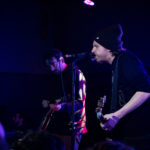 Copeland played the Secret Group in Houston on Feb. 10 as the third show of their current tour in support of their forthcoming album, Blushing. As the proverbial saying goes, the third time is the char with this third show as charming as one could have hoped from the bottom to the top. Along with supporting bands Many Rooms and From Indian Lakes, Copeland put on an emotional and promising show that attendees connected with throughout the night.

Many Rooms ascended the stage first and, surprisingly, started the show promptly on time. The collective started as the solo project of Houston native Brianna Hunt who fields lead guitar and vocal duties in the group. Now, though, she shares the stage (and band name) with her mates all of whom have committed to her brand of music. Throughout the set, they all could be seen mouthing the lyrics to the extremely personal tracks.

The band played through “99 Proofs,” “Father Complex,” and “Danielle”; “99 Proofs” was only released the previous Friday, and, in the track, Hunt works out her disenchantment with the Western church and describes her hopes for its future. In “Father Complex,” Hunt sings about her biological father, his absence, and reconciling those issues. “Danielle” picked up after “Father Complex,” which is appropriate as it’s an ode to her mother who picked up the slack where her father fell short. The lyrics (“My monster mama loves me so”) harken back to a book that her mother would read to her before bed. The songs are extremely intimate, melancholic, and lyrically driven; the lyrics and subject matter do tend to outshine the instrumentals, which languidly accompanied Hunt’s soft, falsetto voice.

The energy intensified when From Indian Lakes took over the stage. FIL effervesced with a nuanced sound, bubbling between a tambourine, keyboard, and drums that popped the audience upright. Multi-slash vocalist/producer/band founder Joey Vannucchi simultaneously tore at the hearts in the audience – a distinct contrast to the style of music you were hearing – with his morose voice. It forces your feelings to compete with your ears, your body wanting to shake your shoulders to the groove up against the desire to sit down crying in Lotus position while questioning your life’s decisions. (Many chose to dance; the crying came later in the Copeland set.)

The nuance of the band continued with FIL’s complex instrumentals. Each member was intently focused on their own part of the machine. The pieces felt separate, but, just like a fine-tuned machine, they fit together perfectly. The keyboardist and the bassist danced with closed eyes, lunging forward and backward with the music. The drummer’s eyes would close, and he would smile with closed lips when he wasn’t visibly counting out the beats.

Vannucchi, too, looked possessed by the music as he shred his Fender. He explained that he took some time off and recorded some music that made its way to the set along with fan favorites “Happy Machines” and “Sleeping Limbs.” As From Indian Lakes wrapped up their set, someone yelled, “Don’t wait three years again!”

Speaking of bands that shouldn’t wait three years (well, almost three) to do anything, it was Copeland’s turn to take their spot on the stage. It has been (almost) three years since the band hit the road, but with their new album, Blushing, on the horizon (their first in five years), the tour helped set the stage for the release. Their set kicked off with the debut of “As Above So Alone,” a new track off said upcoming album. The song displayed strength and promises hope for this new project, the new track specifically featuring a strong bass line with a fun, uptempo groove that made concertgoers dance. The song paired well with the backdrop of lights that switched colors as the track pulsed along.

The other new songs Copeland played consisted of “Lay Here,” “Night Figures,” and “Skywriter.” “Lay Here” creates a dichotomy, illuminates a range, and sets an expectation of the variety of music to be expected on the new album. The single, released mid-January, is a thing of beauty. The slower-paced drums and haunting vocals that vacillate between midrange to soprano blanket listeners with intense empathy. As Aaron Marsh sings, “You know I can’t sleep with my head like that … Tracing melodies around your skin,” the audience closed their eyes and nodded their head as if they knew exactly what he was talking about.

The split between the groove and the ballads was even more obvious with “Skywriter.” The song, played third to last and well-positioned for emotional importance, is a thing of beauty with an incredible piano backing and wistful vocals. While Marsh sang, “What’s the point of loving you if it just makes me crazy? … Does that make me crazy?” a woman at the edge of the stage folded over in tears.

Weepiness wasn’t the only thing felt during the show. Cheers arose from the crowd as Marsh introduced “Chin Up,” and when he introduced “I’m Safer in an Airplane,” he advised, “I hope you like it,” to which someone yelled, “Of course I’m going to like it!” The fans treated the band like welcome friends in their homes, both emotionally vulnerable and physically welcoming. The band played songs off of 2014’s Ixora as well as hits from all the past albums, including In Motion and Beneath Medicine Tree.

Throughout the set, Marsh possessed a certain understated swag. With his shoulders up to his ears and his hand to his face, his stage presence commanded attention and evoked the emotions he was conveying through the messages in his songs. All of the members brought their own special positive energy, delivering physically invigorating and emotionally moving performances. If Blushing contains half of the raw emotion, fire instrumentals, and solid grooves delivered at the show, then do yourself a favor and forget Valentine’s Day chocolates. Treat yourself to this new album.