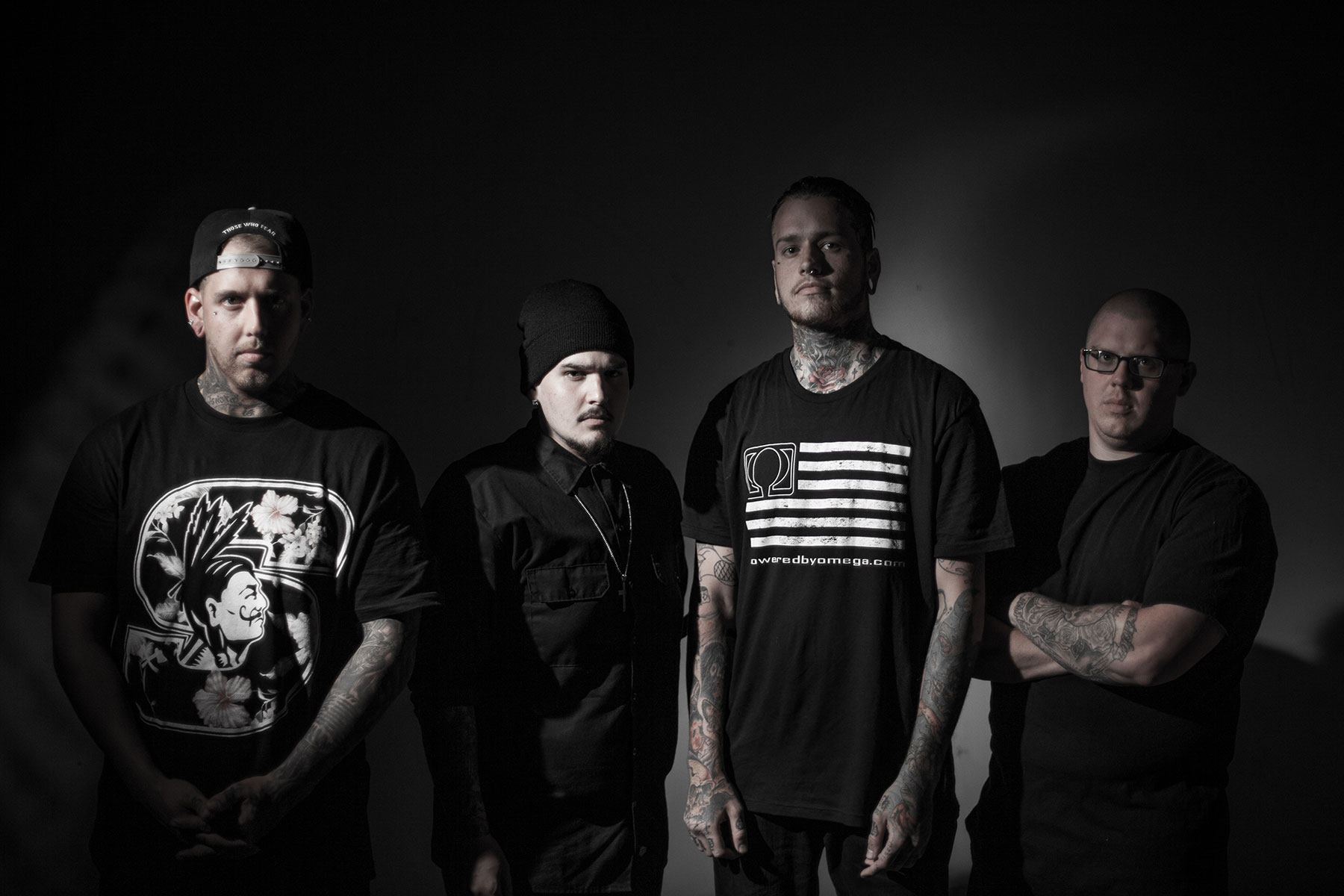 Death is in their Blood

It doesn’t get much heavier than the beatdowns Those who Fear unleash every night at their shows. With an incredibly strong latest release, ‘Death Sentence,’ they’re stepping the hardcore game up a little, proving their inventive new breakdowns may actually give life to their mission

Ten years ago, I was onstage with my former band, Symphony in Peril. I share this because the four-piece deathcore outfit Those Who Fear’s drummer, Jacob Wilder, and I are related. We’re both part of that Facedown Family, a multiple-generation surrogate family of current and former Facedown Records artists. And we’re both drummers.

In recent years, it seems to me that “Spirit-filled hardcore” has started to become synonymous with “fundamentalism” or “conservatism,” moving beyond the personal experience with God into the realm of demanding change of surrounding culture. Listening to Those Who Fear’s new album Death Sentence, I started to second-guess my opinion of what this scene has become. I caught up with Jacob on the phone (in a Burger King parking lot in Cleveland) to ask him a little bit about their ministry.

I listened to the whole album this morning, and, man, that thing is heavy.
(Laughs) It’s what we were going for. I mean, we can’t write the same record over and over again, so we tried some new things, some interesting elements.

That’s what stuck out to me. I noticed the inclusion of a lot of different guitar sounds, as well as some incredibly interesting patterns and grooves, which is surprising for a heavy beatdown band. A lot of that’s on the drummer. I’m a drummer myself, and I found that especially fantastic And from what I’ve been reading, a lot of people have been enjoying it, too.

Yeah, dude. That’s what’s amazing to me. I’ve been searching so hard, but I haven’t found one negative review so far. I’m looking for it, but I’m not seeing them. It’s blowing me away.

As a Facedown alumnus, it’s interesting to me to talk to a current Facedown band. It’s been 10 years since I was in the “Spirit-filled hardcore” scene. Back then, a lot of bands were more open (about their faith). Now it seems like the flavor of the week is being as evil as possible. How does that work out for you guys?
The kids love the music no matter what. Most of our fans would never set foot into a church. They hate the church. They think the church is out to get them. They hate “God,” as you said. The thing is, they won’t go to church, but they’ll come to one of our shows, you know? We just pray for them beforehand, and before our last song, John (Healy, vocalist) always talks about what we believe. After that, it’s usually really quiet for a minute, and then he says, “We know most of you don’t agree with what we’re saying, but we still love you and God loves you and come talk to any one of us.” Every once and a while, the reaction gets weird, but for the most part, they are all about it because they love the band. And then they get interested and come and talk to us. Every night. Even if the reaction is weird.

From the lyrics I’ve read from Unholy Anger and Death Sentence, it seems like John’s lyrics are a little more personal in nature. In my experience, it seems that people are more prone to latch on to more personal lyrics rather than when they feel like they’re being preached at.
Exactly. It makes you think a little bit. Even the more “Christian” songs, they are still really in your face.

It seems like outside of those overtly “Christian” songs, there’s a lot of “this is what I’m dealing with” or “this is what I’m angry about,” and that it’s OK to have emotions or be frustrated or angry or express yourself. I feel like we don’t see that enough, especially from Christian bands.
Thats exactly what John is trying to get across in his lyrics. You know, just getting that aggression out. He was bullied a lot growing up, so a lot of that anger that kids have these days — he had that. He lived it.

It’s interesting — and refreshing — because it seems like right now in the Christian hardcore scene that it’s all about pushing agendas. For instance, some of the louder voices have gotten themselves in a bit of hot water with the heavy music community with their outward stances on the LGBTQ community—painting them as overly conservative, homophobic bigots. How do you guys navigate that aspect of playing Christian hardcore? Regardless of your stance on the subject, you’re kind of guilty by association, right?
Honestly, it’s so tough. It sucks because… I don’t know. It’s hard to answer those questions. When someone asks you a question about gay marriage, it’s like no matter what you answer, you’re doomed either way. You know what I mean? It’s so controversial. It can ruin everything.
So when it comes down to it, we’re not going to release any sort of statement or put a stake in the ground or anything. We’d rather just not answer those types of questions. Like it or not, there’s an element of this that’s a business, too. And the media asking us questions like that — like I said, you’re doomed if you do and doomed if you don’t. Come talk to us personally about it. It’s not worth ruining any sort of reputation over.

Right, because if you come out against something like that, popular secular heavy music blogs will destroy you.
Yeah, and if you say you’re for it, then the Christian community will, too.

Exactly. Spirit-filled hardcore has always been about taking a stand for what you believe, but always on a more personal level with God. It seems like a lot of these Christian hardcore bands use their position in the hardcore scene to make political or ideological statements. As a band, do you guys feel like you need to use the microphone or lyric sheet to speak into or against culture as a whole?
That’s a tough question. It’s definitely for us, but we do feel like we are all called to do this to share our love for Christ. This world is broken. Like I said, our mission is to share the love of Christ with these broken kids who would never set foot in a church, but they’ll come to our shows because we’re heavy. But it’s good for us, too. This is a tough question.

Reading the lyrics off of Death Sentence, the song “First Amendment” seems the most pointed out of any of your songs, as in making a statement beyond something personal. Have you gotten any push back on that? Has anyone been offended by you guys taking a hard political stance?
Honestly, not really. So far so good. Kids seem to be loving that song and posting a lot about it. I’m sure it’ll get to Lambgoat eventually (laughs).

It seems like your whole stance as a band is just being real. Even the way you said that your vocalist talks on stage, saying “I know that most of you will disagree with me on this.” That’s a lot different than it was even 10 years ago. It seems like these days you have two main types of Christian heavy bands — those bands that use the platform to make polarizing statements knowing that a great deal of people will be upset, or those who are merely faking it because they know they have an automatic audience. It’s refreshing to me to see a band like Those Who Fear who are extremely passionate but aren’t trying to make themselves look like something they aren’t.
That’s exactly what we strive to be. We know most of the kids at our shows hate what we’re saying. But we don’t care. We love them anyway. We hope they come talk to us. We’re not going to get in anyone’s face and tell them they are doomed to hell or anything. We just want to be real and have conversations with these broken kids and love on them.

I couldn’t think of a worse thing for a band to say than to get on stage and tell everyone they’re going to hell.
Right. That shuts people off immediately. I don’t know why anyone would do that. We’re doing this to share Christ’s love with a broken world. And that’s it. We’re just being real.

Those Who Fear was posted on July 25, 2014 for HM Magazine and authored by Collin Simula.