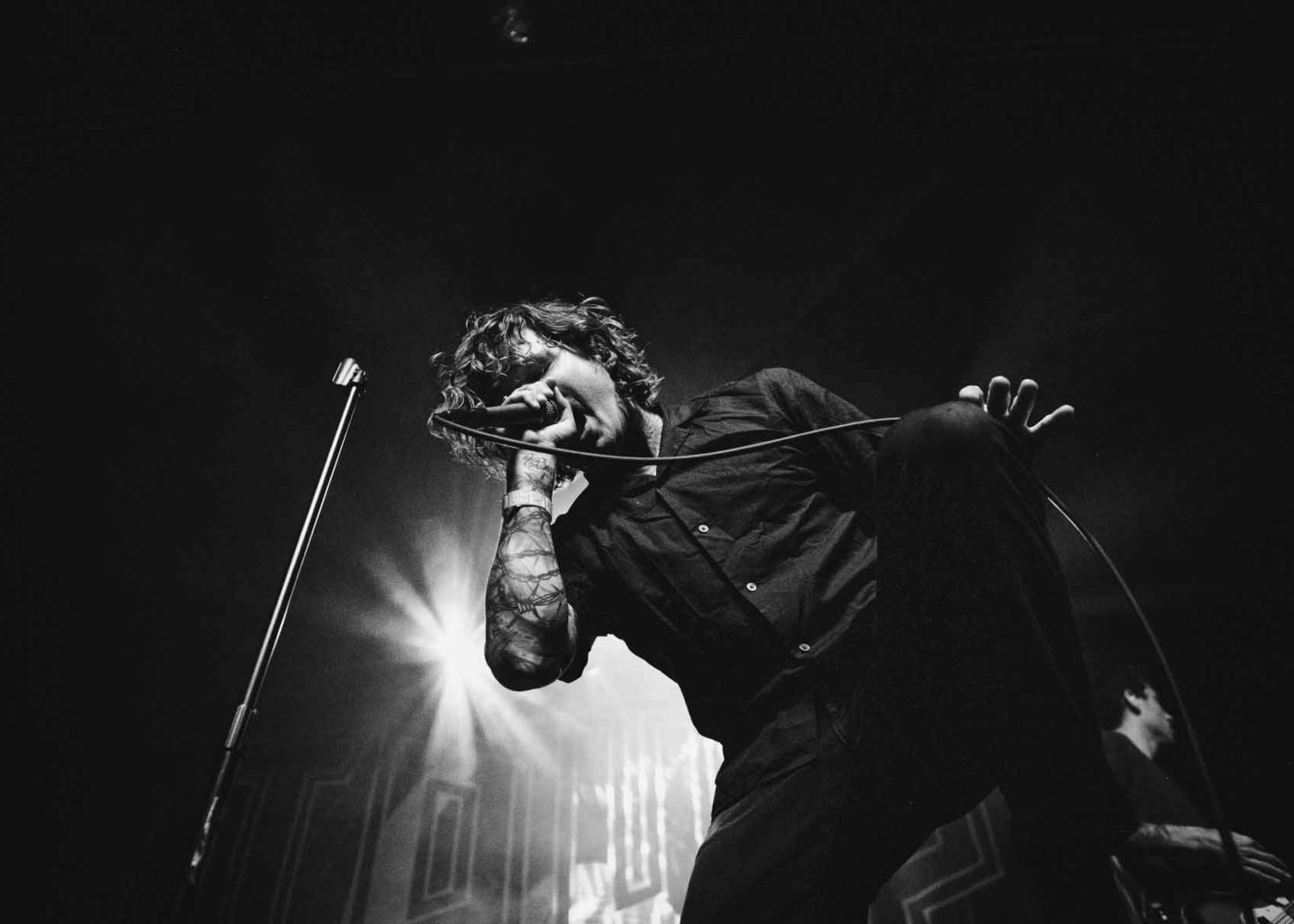 The Unwavering Drive to Create

The bigger they got, the less The Devil Wears Prada took it easy. HM contributing writer Andrew Voigt spoke with quarantined vocalist Mike Hranica about the band's latest venture into podcasting, his writing career, and his entrance into the business world

In 2019, cornerstone metalcore band The Devil Wears Prada unleashed The Act, their newest album called “raw, avant-garde, and unlike anything they’ve ever done.” With vicious guitars, driving vocals, and the typical Prada pulse, this release gave TDWP fans a new measuring stick. Yet, even with its in-depth lyricism and expansive musicianship, the band still seeks to create. They also host an aptly named podcast, Prada Pod, released roughly three times a week. Digging even deeper, Mike Hranica, the lead vocalist of TDWP, recently released a pseudo-fiction novel, started another band project, and has even dipped into the coffee business. Andrew Voigt, contributing writer at HM, sat down with Hranica to discuss the band’s insatiable quest for creative fulfillment and life amid quarantine.

HM: (The year) 2020 has been different, to say the least. (Last year) was much better as The Devil Wears Prada released their newest studio album, The Act. As a massive TDWP fan myself, I absolutely love this album. I have to ask, what inspired this one specifically?
Mike Hranica: Thank you for the kind words. A buddy we talked to for our band podcast yesterday summed it up well. He said that he finds himself attracted to music when it feels like the band listens to a lot of music, and they consume a lot. I think that’s a pretty accurate summary of us and the guys who made the record. We are avid music consumers.

With that being said, I think back to With Roots Above and Branches Below or the Zombie EP and I remember finding peer bands like The Ghost Inside or Whitechapel and I was like, “Wow! This is really heavy,” and I wanted to incorporate that. Anymore? I don’t really think it comes from anywhere as far as peers that drive us to make the music that we do. I think we take anything under the sun into what we do and try to make the right product under the umbrella that is Prada.

Outside of TDWP, you’ve also been involved in another musical venture called God Alone. How did that project come about?
That came about as soon as I met Kyle (Sipress, guitarist of The Devil Wears Prada). Kyle worked with an ex-girlfriend of mine. She connected us and then we quickly hit it off. He is always writing; he’s always playing guitar. At that time, he didn’t really have an active musical project (I don’t think). I had introduced him to a band called Young Widows – which is one of my absolute favorites – and told him that I wanted to try to do something like that. He really fell in love with that band and we shared different influences. The next thing you know, we had a project going.

The first time we hung out, he had a song the next day, and we started recording down in Indiana when we were both living in Chicago. He was working bussing tables in Chicago and he wanted to get back out on tour guitar tech-ing so Prada hired him. When Chris Rubey decided to leave TDWP, we brought in Kyle. He and I were doing God Alone before he was active with Prada, but now he’s one of the members. 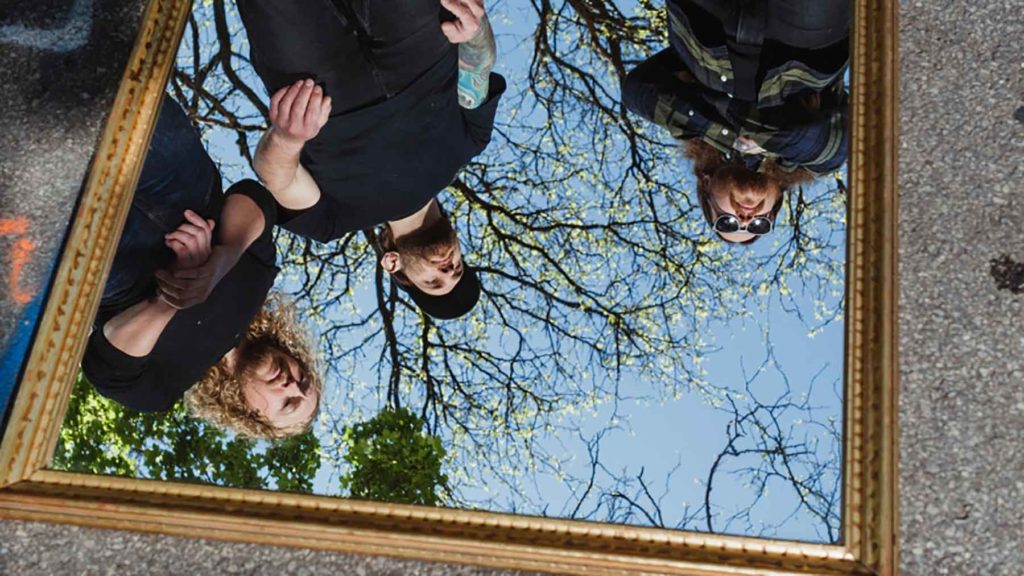 If you had to “label” God Alone – I know no artist likes to label their work, but amuse me anyway – what would you call it?
I call it post-punk. We’re pretty transparent about influences. For me, definitely like The Jesus Lizard and The Birthday Party. METZ is a band we both enjoy. To me, it’s post-punk. When we started, I thought it was garage rock-y, but not so much now.

As live shows are canceled for the foreseeable future due to the current climate of this pandemic, are you and the guys from TDWP staying in touch via Zoom and FaceTime?
The biggest thing for us is doing this podcast. As soon as we got off the road, I realized how much podcasting I enjoy in keeping me sane, particularly of the hockey variant. I figured with folks working from home right now, it’s a pretty prime environment to release that. It lets people see the band and there’s definitely no veil there. We’re very forward and forthright.

What about you? Do you have a family? How are you spending your time in quarantine?
My girlfriend and I have been together for five years, coming up on six. We own a house here together with two little pups, so that’s us. We’re never gonna have kids. Not a family guy, personally. Most of my days right now look like the podcast. I like to build things, woodworking, so I have a little shop garage here. I’m working on a dining room table right now. A lot of TV right now. Unfortunately, not so much sports. I’m a big sports fan.

You’re a hockey fan, right?
I’m an over-the-top hockey fan. I play as well. I try to play as much as possible, so that has me bummed out. 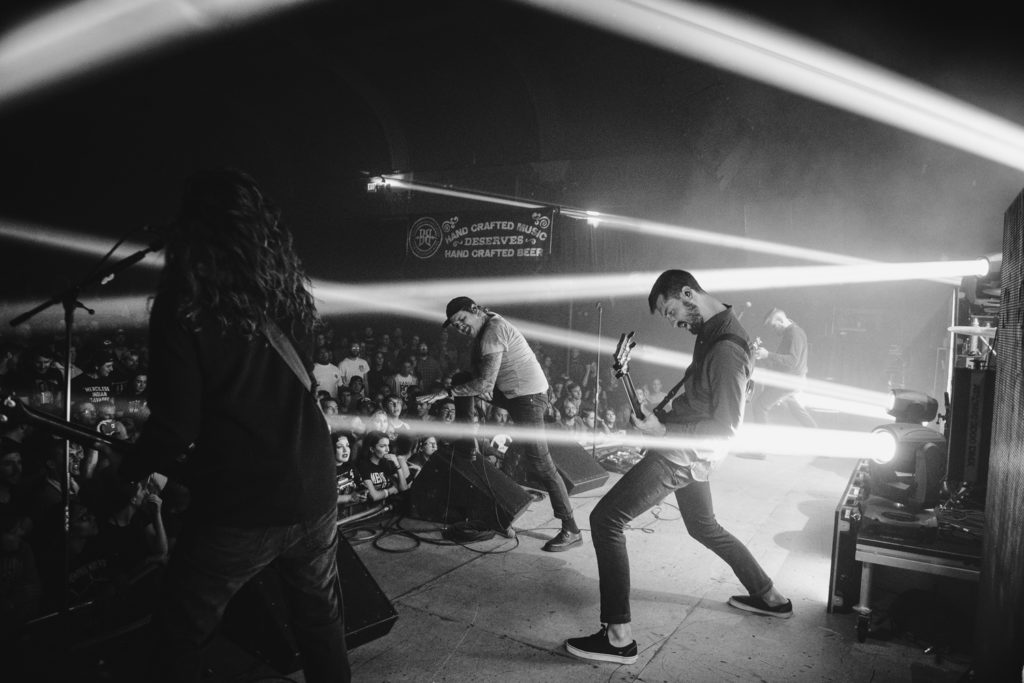 With touring down, are you still writing music? Any thoughts on whether or not we can expect more TDWP music in the next few years?
No. Kyle’s always riffing, but, otherwise, I have some studio time booked for myself, personally, for a solo idea I have. We’ll hopefully be getting into the studio once things cleared up.

You recently released a book you wrote called Bullet-Made Tambourine. I haven’t read it yet, but the title alone is intriguing. What’s the message you’re trying to convey in this book?
It’s cathartic. I’ve written a few novels that I haven’t finished that are more general fiction (the narrative), but this is more prose-based and matter-of-fact. I move through an exaggerated account of my life day-to-day. A lot of it includes touring. It’s a lot of looks at life as a touring musician and what comes with the traveling. I consider it more of a fiction novel because of the exaggeration. I’m reluctant to say, but it’s certainly Burroughs inspired structurally, as well. (Editor’s Note: Augusten Burroughs.)

Do you enjoy the writing process? Any ideas for another book in the future?
Yeah, certainly. That was always my plan before I got involved with Prada. I certainly want to finish those novels at some point. It’s just a lack of discipline to sit down and actually do it. But I plan on doing that.

As a coffee addict, I’d be remiss to not ask about Dogma, your coffee-roasting venture. If you didn’t have enough going on with two bands and a blossoming writing career, what in the heck got you into the coffee business?
Dogma is my coffee label that my business partner Micah and I started. Micah and I have been good friends for a long time. We actually went to the same high school in a small town in Ohio. He’s done album layout for Prada a ton. He’s a photographer/graphic designer. Basically, Prada did a coffee collaboration with a company called Metric down in Chicago. Xavier, one of the co-owners, and I became good friends. Xavier approached me about an idea where I basically “front” the face of the business and we use Metric in terms of fulfillment and sourcing.

So, with that, Micah and I created a brand, and we wanted to basically spin-off what Prada and Metric did as far as a collaborative coffee but instead create coffee of my own vision with different collaborators. Unfortunately, we’re at a stand-still right now. I can’t get down there and I haven’t approached my ideas as far as upcoming collaborators. Basically, we try to come together with different factions to offer a product that’s different than, you know, a t-shirt. Our first collaboration was with a record label called Flenser Records. Then we did one with a band, Protomartyr. Recently, we did a collaborative coffee with a black metal project called Mizmor. So yeah, we hope to work with really anything of the musical variety.

The music industry as a whole is really taking a hit right now due to the shutdown of all live performances. As an artist, this is not a good time for anyone. As fans, how can we best support you and the guys from TDWP?
I appreciate you asking that. Merch sales do go a long way. It’s not like debiting a banking account like selling merch on tour does, but that helps. People listening to the band on Apple Music or Spotify is certainly not enough to earn a living.

We opened a Venmo for the Prada Pod (Editor’s Note: You can contribute to the Venmo via @PradaPod) to basically help pay for the subscription fees for running a podcast because we were putting out so many of them, we need a more sizable hosting package on our Buzzsprout website. If anyone wants to tip the podcast (which you can do via PayPal at PradaPod@TDWPband.com), then we’re taking that money and throwing it back to the subscription fees.

The Act by The Devil Wears Prada is out now.

The Devil Wears Prada – Mike Hranica was posted on May 11, 2020 for HM Magazine and authored by Andrew Voigt.