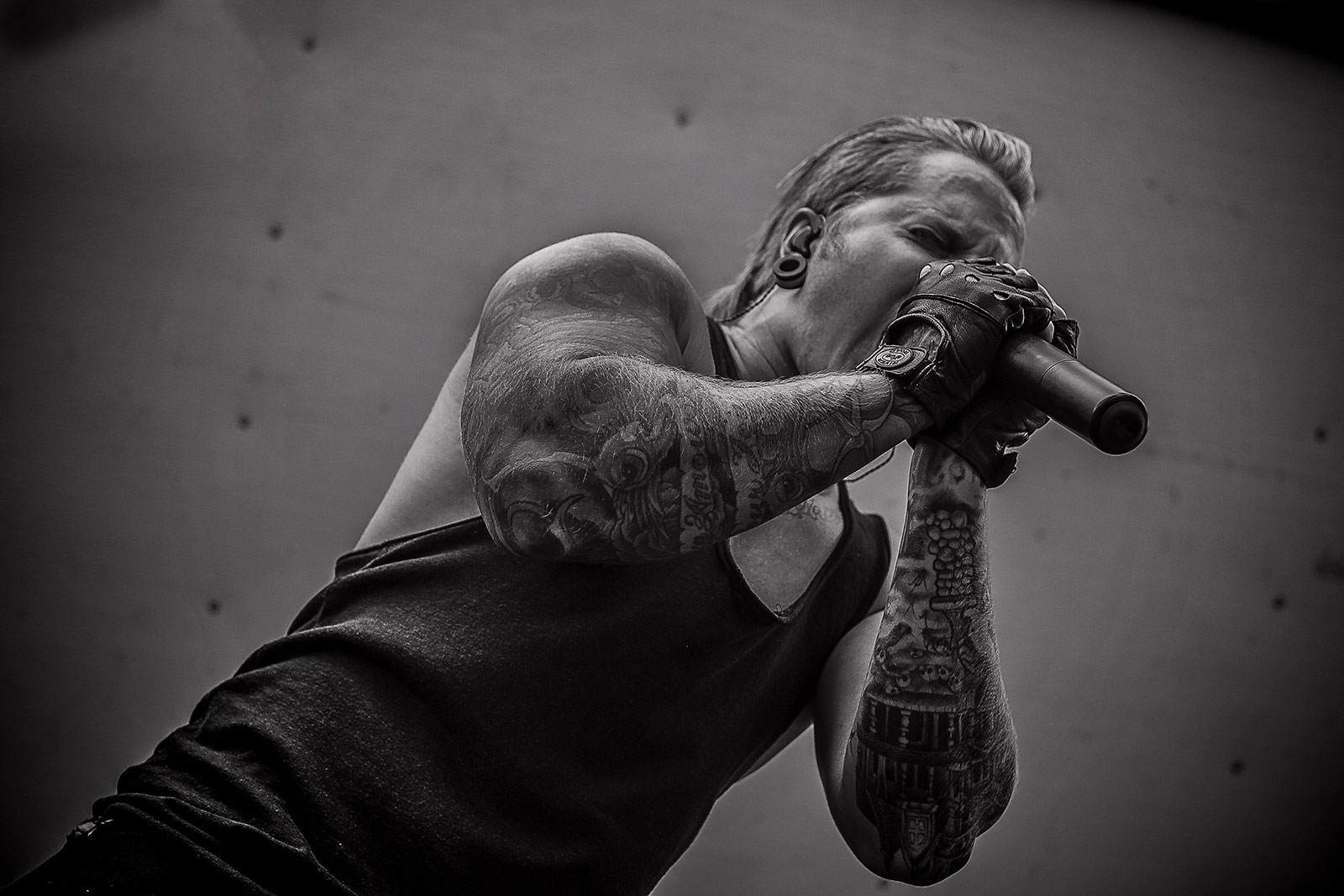 The face of A Skylit Drive is evolving, whether the band Planned for it or not. After a couple of sudden departures, Vocalist Michael Jagmin tells us how they move forward

Michael Jagmin of A Skylit Drive 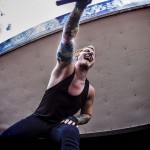 Michael Jagmin of A Skylit Drive 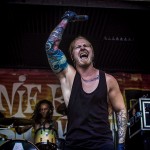 Do you go by Jag or do you go by Michael usually? What do you prefer to go by?
It doesn’t matter. People use both of them.

Just wanted to make sure I wasn’t calling you something you didn’t like, and I always knew your name was Michael.
Either one is good!

Catch me up on what you all have been doing the last few months as far as tours go. I know you were on Warped, right?
Yeah, that was the last tour we did this past year. After that tour, we finished up everything with our acoustic album, Rise: Ascension. It was only a few months ago our bassist and our drummer left the band. We weren’t able to tour again. It had already been decided we weren’t going to tour after Warped, at least until (2015). Then, they randomly up and left a few months ago.

You said right now it was randomly. When the members left the band, was it suddenly, too?
We didn’t know they were going to post a statement on the band page. The way I look at it, when band members are quitting, it’s like they’re relinquishing their right to even do anything on the band page. The right thing to do is to give your statement to the remaining band members who are staying in the band so they can post their own statement. You can post yours along with it, so the fans get the entire picture.

Versus what they did. They went and posted it without telling anybody. It left everyone with this one-sided picture. The fact they did it without saying anything was a surprise. We were trying to contact one of the members to try to kick him out, but he wouldn’t respond to anyone. I’m not sure if he saw that coming or if he was already planning on quitting, but he wanted nothing to do with anyone and wouldn’t respond. The other one — we would have wanted him to stay.

But, in the end, they both left with this dark cloud over them. Things weren’t positive for either of them, whereas we were, like, one of them was more of a benefit to the music, but your attitude was only working against it. We can find someone who is just as capable and also has that new passion to do this. That’s one thing we’re super excited about now, the kind of people we can find. The three left now, it’s almost we’re like jaded old men. We’ve been doing this for a while. It’s going to be nice to bring in some new people to make it fresh and exciting. I think it will change our outlook and help us go back to that stage where we are excited again. I’ve been around so much negativity, every single tour. It can start to drain you. It can start to take away what you love about it.

Let’s talk about the new people you’re looking for. I saw on Facebook a few weeks ago you all were holding auditions. How did that go? Did you find anyone from that? Do you have any prospects?
Yeah. That’s where we found one of our guys. Drummer-wise, we didn’t hold open auditions for a drummer. It’s funny because I already knew someone who really wanted to help us out with any kind of need. We had randomly been talking about it earlier in the year. All of a sudden, come the end of the year, I was like, “Hey, Reg. I need you now.”

He’s a great fit. I think he’s everything we needed to fix as far as previous issues. As for another screamer, there were a couple standout auditions, but one in particular definitely rose above the rest.

To clarify, you do have a drummer.
Mmhmm.

As far as a new screamer, did you get a new person for that, or are you still narrowing it down?
I’d say it’s 95 percent.

How was the process of asking strangers? Was that overwhelming? Did that go well, asking people to send in auditions?
It went pretty well. We were fair. We watched everything to see if there was any actual spark in anyone’s ideas.

I don’t know where any confusion came from, but we’d end up getting a bunch of questions. We’d have to overlook them because there were just so many. We only really had time to look at people who were going to be go-getters.

For me, I would never audition for a band with a bunch of questions. If I’m confident in what I do, I’m just going to do it. I’m going to do it somehow the fastest way that I can. Somebody coming in with an almost a defeatist attitude is, of course, the last thing we’d be looking for. In that way, that was probably the only issue.

In its entirety, it’s acoustic?
Yep. Yeah, the whole thing.

What made you guys want to do that? Did you want to just give the fans something new? What was the thought behind that?
It’s something our fans have asked for a really long time, even prior to any other bands doing a reimagining or anything like that. It’s something we knew they always wanted to hear from us. We’re not really one of the bands who wanted to half-ass anything. We wanted the band to stand on its own, but also that if we were going to do it, we wanted to make something even more special out of it. It felt like the right thing to do.

Do you also enjoy performing acoustic? Do you plan on doing these live?
We thought about doing something, like, really exclusive and small, but then we all decided against it. We decided to keep the album as a simple, novelty-type thing. We just wanted to do it, and not treat it like a monument album.

You guys started around 2005, correct?
I’m actually not sure when A Skylit Drive happened, probably like with most bands that started in high school. We don’t know when our merger was , but we combined with another band. I started in 2006, 2007. Something in there.

By that time, the post-hardcore genre had been blossoming. What is it like, having been able to look back and also look forward? You guys are in between the older bands and the newer bands of this genre.
Back when we started, singing wasn’t as prevalent quite yet. It wasn’t nearly as hard to pick out a band to work something back then.
That’s the hugest difference now, is that it’s so over saturated with so many of the same band, even I can’t keep up with them. Whereas as back then, the bands who were at the top, they sounded like that, and anybody who tried to sound like them didn’t get anywhere because they would just be considered a carbon copy of that band.

It seems like it’s a lot easier now to get your face out there, whereas back then it was a little more elbow grease. You had to get into the right course, get in front of those bigger crowds. Now it’s easier and harder. Does that make any sense?

We have to recreate ourselves without completely changing ourselves. We try to do that on every single album. It’s extremely daunting, but there’s no other move. If we did a new album that sounded like a complete carbon copy of our most popular album, it wouldn’t really be what people want.

Is there anything you want to say about an upcoming album (after Ascension), or is it too early to talk about it? Do you have any goals?
I think it’s probably way too early for me to even know what that looks like because there’s no actual set timeline. There’s no set plans for us to go into the studio. The first plan was to have it in by the summer. It could still be the summer or the late summer or the fall. It will be sometime this year. That’s all I do know.

Let’s talk about your vocals, too. Some fans and critics have noted your voice has changed from earlier albums throughout your career. What are your thoughts on that? Have you heard that and if so, what do you think about that?
When I first joined the band, was when I sang in a way where I’d throw my voice out way more often pretty much. I wasn’t very proper about the way I was singing.

From every album I can see different changes. For most people, it takes two or three albums for them to really notice a difference. From touring I slowly start adapting and inheriting new tricks to be able to get through the set.

If you think about it, I’m playing live shows the whole time I’m in the studio. The muscles in your throat are going to adapt to what you’re doing live. While I’m in the studio I’m singing as I would do live.
From album to album I can remember certain albums where I had more of a struggle on whereas Rise was the easiest album for me. I found a comfortable spot after touring for so many years and trying to find that sweet spot, where I can still sing high and I can still sing the old songs.

It’s just at a slightly different tone because I can just belt it out. It’s like singing from a different spot in your throat. It’s just the way that I do it now. I have more longevity.

I think that’s where that comes from. I like the fact that it’s different every album. I get bored hearing the exact same thing out of a band five albums down the road. What’s good to me is that kids can still tell it’s me. I sound like I’m doing something different. So, to me that’s cool.

They don’t think it’s a new singer because it still sounds like him. It just sounds like he’s trying something new.

Do you have a favorite venue or city that you like to visit when you’ve toured?
Dallas is always fun. The Northeast always treats us well. New York. New Jersey. Pennsylvania. That whole pocket up there in Connecticut. We always have good shows up in there.

Then, of course, Northern California. Sacramento. Those are always fun. Salt Lake City is always a really good one.

You’re a big fan?
That’s what got me started in music back when I was nine years old. That’s the whole reason I even got into rock music. I would definitely enjoy performing with them.

What have you been listening to lately? What’s on your radio? What’s on your phone?
I’m a super-big weirdo when it comes to music. I’m always writing it to where by the time I’m not writing it anymore, I don’t want to listen to music anymore.

We’re in full-on writing mode, so every day, for a good three to four hours out of every day, I’m sitting in front of my laptop listening to a demo, getting my vocal ideas together. When I’m done with that, my ears are ringing and I’m, like, all right, I’m done with music for the day.

A Skylit Drive was posted on January 5, 2015 for HM Magazine and authored by Jordan Gonzalez.