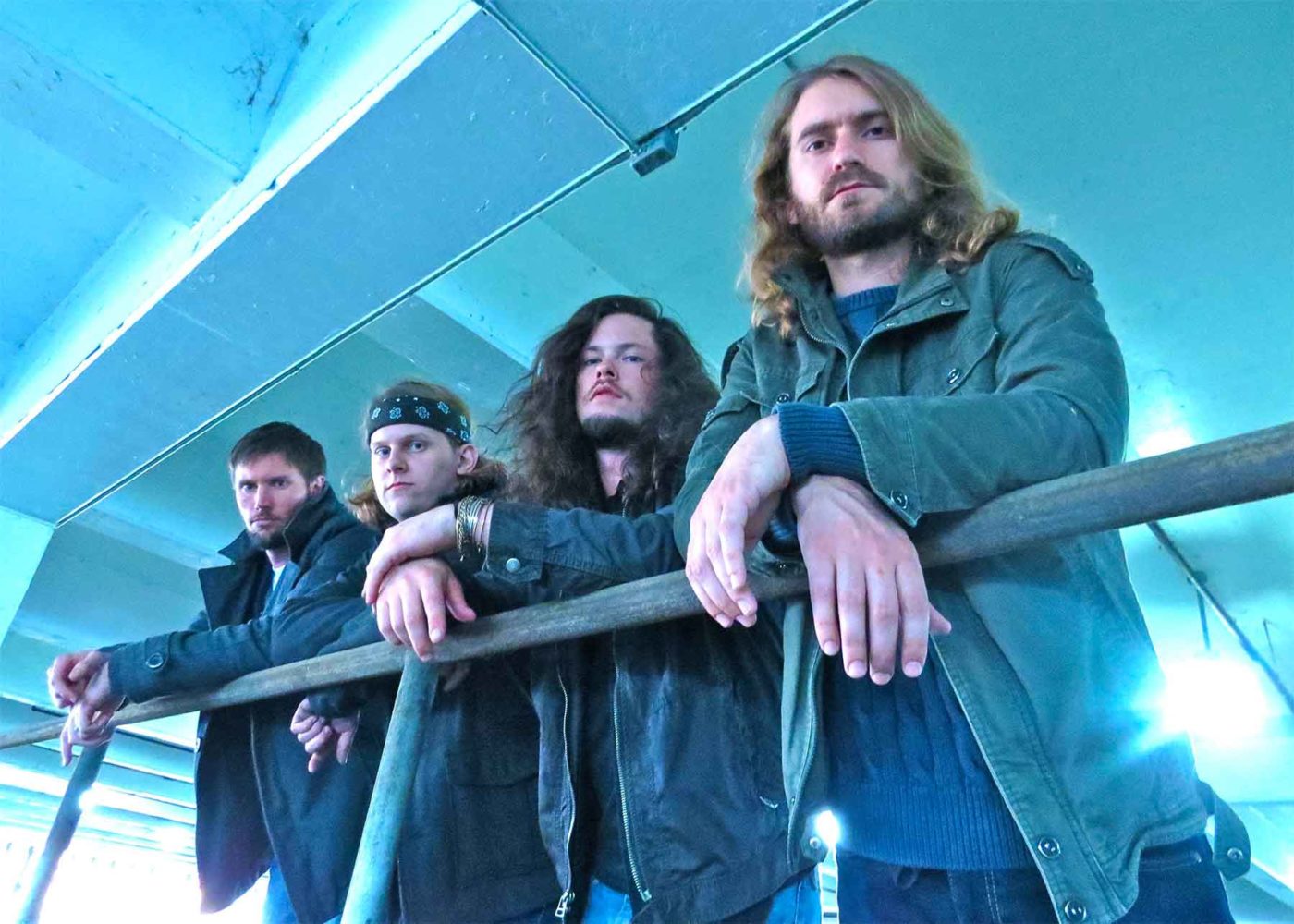 Surf-rock, sea mines, and spirituality: How Rusty Shipp brought war and peace together on their most recent release, 'Liquid Exorcist'

Nashville may be conventionally known as a land where country dreams come true, but among the myriad grassroots groups grinding on Broadway is Rusty Shipp, a surf rock band with a particular penchant towards ’90s grunge, ’80s guitar licks, and more than a little bit of California’s beachy-cool influence. They’re less an imitation of the Dick Dales in the world and more of a new breed of rock in general. The band’s second LP in the seven years Rusty Shipp has been together, Liquid Exorcist, came out in late 2019, and with as much unusual storytelling as the title implies, the record is a surprisingly solid example of getting rewarded for taking the chances that can yield unexpectedly positive results. Focusing on – yes, for real – 1940s sea-mine warfare and the tragic chaos it created, the album finds a way to create parallels with faith and spiritual warfare and how belief systems can be just as terrifying as underwater World War conflicts. With a release that contains so much unusual material, HM had the chance to talk about the unique work on a cool evening only weeks after the album’s release as Russ Shipp, lead singer and founding member, shared his insights on Liquid Exorcist and its journey to fruition.

HM: When I listened to your album, it was interesting to me on a couple of planes. You guys are really committed to this nautical theme. I think it would be easy for it to become something that’s kitschy but the way you do it is not. Why did you choose that, and how come that is so significant to you personally or as a band?
Russ Shipp: When I was growing up, one of my biggest influences musically was The Beach Boys; they were my number one favorite band. I also listened to a lot of instrumental surf rock from the ’60s, which was like The Beach Boys but just instrumentally. Those were kind of my roots. I moved to Nashville from the D.C. area seven years ago and got this band together back then, and we were trying to figure out a band name. My name is Russell T. Shipp and people just call me Rusty: Rusty Shipp. It’s easy for everybody to remember and it’s kind of funny so it sticks. When we were thinking of band names, the guys in the band were like, you know what, let’s just be called Rusty Shipp. It’s kind of funny but kind of cool and just the fact that your name’s Rusty Shipp is a good hook.

The more we tried to think about what direction we were going in, we were like, you know what, let’s try to make music that sounds like a rusty ship. That’s when I was like, well this is perfect because those are already my roots: that surf rock sound, an underwater oceanic sound. So, since the beginning, it’s been a natural progression of trying to incorporate more and more of that surf rock nautical sound into what we’re doing. This album is by far the most obvious display of that. It’s our first concept album, the first album we’ve ever done where from beginning to end it has this cohesive. artistic, underwater sound with all the tracks flowing with one another.

“We don’t want to just make some random songs. We always want to be going one step up, being more creative, more ambitious, raising the standards higher in everything that we release.”

Was there ever a concept album you really connected with from another artist?
I’m a huge Thrice fan. They’re actually my favorite band. I absolutely loved their Alchemy Index; it was like fire, water, air, and earth. This album is very much influenced by their Fire and Water EPs they released. That’s the most influential concept record, I would say.

When I was reading your promo material, I thought, “That’s a lot to wrap into a concept.” They’re two such different things: the idea of spiritual exorcism and this very specific type of war, underwater war. It was in such a specific era. How did those come into play, and how did you decide to wrap those together?
It was an unfolding journey that was one step at a time. It’s weird how the whole thing got going. We released our debut album, Mortal Ghost, in 2017, and we were like, we’ve got to follow up with something. We were going to do a simple five-song EP, whip out some songs and throw them out to keep some traction. But the more we thought about it, we were like, we don’t want to just make some random songs. We always want to be going one step up, being more creative, more ambitious, raising the standards higher in everything that we release.

The natural progression from our last album was, okay, let’s have something even more cohesive sonically. Can we do a story that ties in with everything? From that starting point, it got progressively more and more creative and ambitious. Me being the leader and visionary of the band, I always had this idea scribbled in a journal that it would be awesome to do something with sea mines. I think it’s such a cool image and an iconic nautical symbol of war, especially with the old school ’40s vibe. I thought there was a lot of potential in that to do something.

The more we wrapped our heads around it, we figured out ways to sonically tie the songs together with interludes, tried to create soundscapes that actually sound like a minesweeper in the ocean detecting sea mines, sea mines ticking and blowing up… There are literal explosion sound effects on the album. It was us trying to do the most creative, artistic thing we could possibly muster in our minds that literally was painting an artistic picture of a real scene in history.

The lyrics were more of that art and fleshing it out. Then, of course, you’ve got the spiritual metaphors running throughout the whole thing with a philosophical undertone. That’s just one more element of us trying to be as ambitious, artistic, and creative as possible.

You do have that philosophical and spiritual component to your lyrics, but I don’t want to ask you if you consider yourselves a Christian band or not because, these days, I think that’s a gray area.
We get that question a lot though…

What do you say when people ask you that?
People always want a nice clean and tidy answer to that question, like yes or no. Alas, I am an artist and, not only that, but I am a Christian who is an artist, which makes it even more complicated in my mind. We are all Christians in our band. We are all artists trying to make the greatest art that we possibly can, and, as Christians, we are trying to glorify God with our whole lives.

A significant part of our lives is our art. It’s like the first fruits of our lives. The most ambitious thing we can do with our lives is art, so a natural part of being a Christian is offering that to God. Not just offering it to God in an abstract sense but in doing good in the world with what we’re creating.

Sorry, am I getting off-topic? This is what I’m talking about, you can’t just say yes or no. It’s not that easy.

Not at all. I don’t know if it’s an evolution as a society or as a culture of faith. I’m not sure how you would even define it, but we’ve gotten to a point where people do accept that, when it comes to art, things aren’t always black and white. They don’t always have to fit in one box. If you are a Christian that happens to be an artist, not every song has to fit all the criteria that used to signify that you were a “Christian artist.” That’s just my opinion, but I’ve seen that change over time.
I completely agree with you. Honestly, I feel like HM Magazine would be on the frontlines of that spot with the artists that you all cover. It’s not like (certain magazines), which is a lot more neatly in that Christian bubble of, “This is a bonafide Christian band on a Christian label with a Christian producer for Christian radio for a Christian audience.”

What I’ve observed as a consumer of that type of music when I was younger and what I’ve seen with the artists as they’ve grown as people is that there are social consequences to not checking every single box of what’s required of them in that industry as humans. It is not a very forgiving way to live in your art. Sorry, now I’m getting off on a tangent.
This is a good topic and one that people should be more passionate about. And, as you said earlier, this is an area that does require some change from what it has traditionally been in our culture.

What is it like to create faith-inclusive music in a political and social climate like what we have?
I find, personally, it’s not as big of a deal as people might expect it to be. I’ve found that if you have the word Jesus in a song, it’s going to create a lot fewer ripples than people would lead you to believe. Our audience is very divided. We’ve got tons of fans all over this country and most of those people are Christians that found out about us from explicitly Christian media outlets. But we’re from Nashville, TN and most of the people that are our fans in Nashville are not Christian because they heard about us just by seeing us play with local bands or getting featured on the local rock station which is not Christian. So our music has done really well in both camps. At the end of the day, the people that are consuming our music, they just like the music. The Christians are the ones that pick up on the lyrics more. They’re like, “Oh, wow, this is awesome music, and it’s edifying me as a Christian.” People that aren’t Christians are like, “This is great music, and there’s some interesting lyrics to these songs. I wonder what they’re talking about.”

An opportunity for dissection: It’s there if they want it.
Mhmm. They accept it like everyone else, and they’re not scared by the word Jesus in a song.

If you were to look forward to the year 2025, what would your prediction be for Rusty Shipp?
I would love to be doing this full time because we’re still an indie band and so much of this is us doing everything ourselves. It would be awesome to have some help, whether that’s from a record label, management, booking agent, etc. I think that’s completely foreseeable five years from now: being on a record label, getting our music out to more people, playing more shows especially in the Christian rock world. I’d like to see us on people’s radar up there with the best of them.

To this day we’re still at the point where a lot of people have never heard of us, so, five years from now, I don’t want that to be the case anymore. I want everyone to know the name Rusty Shipp and our music and have heard at least one of our songs on the radio.

Rusty Shipp was posted on January 14, 2020 for HM Magazine and authored by Danielle Martin.