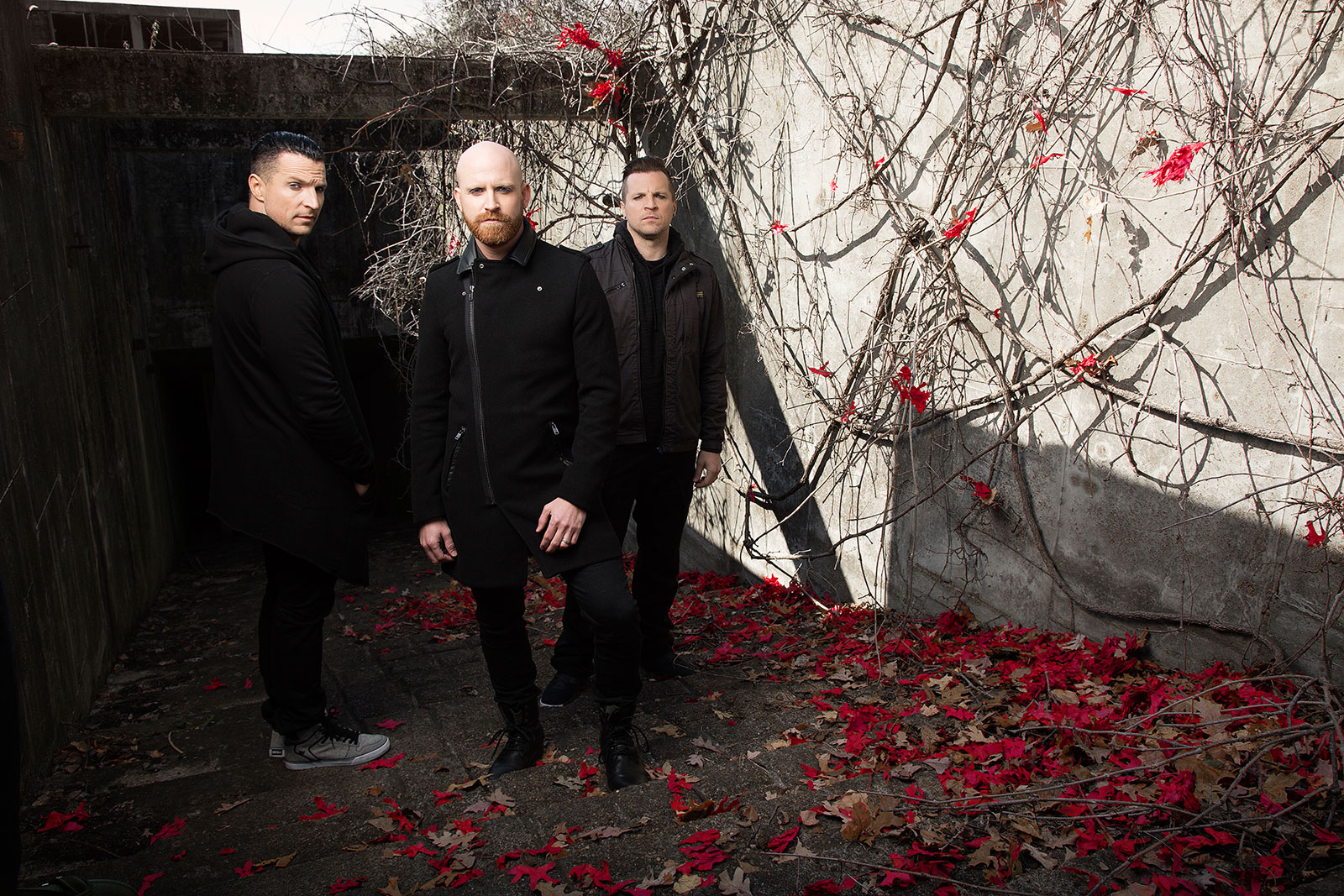 The storied and cinematic career of the rock band RED takes a new, dark turn

Whether it’s because of the striking vocals of Michael Barnes or their unique use of cinematic strings in their music, RED  has had a huge impact on the heavy music industry. Their departure from their traditional sound and style for their album Release the Panic ruffled the feathers of some fans, but their latest release, Of Beauty and Rage, is classic RED with a modern twist. I spoke with bassist Randy Armstrong who filled us in on the inspiration for Beauty and Rage, how their songs come together and why they put a medieval plague doctor as their album cover.

Why don’t we jump right into the new album? Give me some details on the crowdfunding decision for this album.
There is some confusion about the crowdfunding thing. We didn’t actually have our fans fund the record. We’re still on a label (Sony) and we have a budget for the record. We did a PledgeMe to secure funds for other things like traveling and live shows.

The theme of contrast seems prevalent in this album in the title and even the sound, with so many soft, delicate melodies that clash with heavy parts. What inspired the idea of a contrast?
The album talks about being able to find the beauty in the midst of ultimate suffering. We wrote it about the last couple years of our lives and what we’ve experienced on the road and personally. We got in the studio last year in January up in Maine and spent the year making the record. It was a lot of discussion about past experiences and current experiences and helping each other through hard times.
A lot of our fans reach out to us and they find solace in our music. I think this time we found solace in being together in the studio and working through this record.

Are the songs about personal stories?
I’d say this record is the most personal record we’ve ever written. But the things we talk about are things everybody goes through at some point in their life. They are universal things.

Going back to your previous comments on finding the beauty in suffering, are you finding the beauty in ugly things or are you comparing good and bad things?
We go through dark times in our lives, and we’ve got to find a way to see the light at the end of the tunnel and find a way to see what we’re learning through these experiences instead of thinking the world is coming to an end. That there is this despair that’s never going to cease. I think that was the same case for us at certain points. We wanted to reflect on that and explore all those emotions and things that we were thinking and put them into the album.

How is the lyrical and musical writing process? Is it a group effort or a solo effort?
It’s definitely a group effort. I’d say everybody’s name is on every single song. We usually get all the music first, sometimes we’ll get a chorus and then we always dive into lyrics at the end.

When you’re writing the music, do you pair what you feel with lyrics? How does that come about?
We usually think of a concept first. For example, the song “Darkest Part.” You think about what you’re feeling and find a creative way to say that. So someone will come to the table and say, Hey, I have an idea for a song, it’s called “Darkest Part,” or, I have an idea for a song called “Imposter” and this is what I want the song to be about.

So the song takes on that identity before the lyrics are actually written, but then we choose the track we feel can tell that story musically.

In my notes I put down that “Imposter” is a heavier song. Let’s talk about “Imposter.” I found it intriguing.
That song is very different from the formula that people are used to hearing where the chorus isn’t usually the slowest part of a song. In “Imposter,” the verses and the prechorus seem to be a little bit faster and the chorus takes on its own marching-esque feel. The first time we heard it we thought this was something very different and was something we really liked about it.

When we went into the studio, we had 50-plus ideas that were snippets of a guitar track or a lyrical idea. The way we do things is when we get into the studio is we start to piece together our favorite things and make up a song, ultimately. With “Imposter,” it was something that stuck out to us as very sinister, an intentionally dark song that talks about us being at war with ourselves.

It represents this dark part of our soul that is always with us and it constantly tells us go ahead and do this even though you know it’s going to destroy you. It’s always over our shoulders, it’s always there, it’s always working.

“Shadow and Soul” was another track that stuck out to me. It had a lengthy, haunting outro. What inspired that outro?
The outro happened almost by accident. We were actually in the studio tracking vocals for that song and Michael (Barnes) was just on his own that day. There are two different rooms where we were tracking vocals, and Michael asked to turn the mic on because he wanted to try something. He thought it was a very long instrumental outro and maybe we could add something to it. We turned the mic on and just kind of let Michael mess around, and he started doing this falsetto thing, and we were like, whoa, and all started giggling. It blew us away, and we were like, Yeah, that’s going to stay on our record. Things like that happen by accident, sometimes they’re intentional. That was definitely a beautiful mistake.

Is there any song in this album that means a lot to you especially?
I would say “Fight to Forget” would be one of the more personal songs for me. My brother went through a pretty rough time in his life the last year and a half, and watching him go through that was a tough time for all of us. I’d say another one would be “Shadow and Soul.”

I personally feel this album was a classic RED album that had traditional elements and modern flair. What do you think?
I would agree with you. I know when we got back to the studio we were talking about what we wanted to do. We took a departure from the elements that we’re known for (with Release the Panic) in the past with lots of cinematic strings and production elements. We didn’t invent the sound, but I think we kind of made it our niche. When we did our fourth album, Release the Panic, we had a specific goal in mind. We wanted to be more of an impact in mainstream rock radio.

That was, I guess, a more watered down (formula). Watered down lyrics, watered down production and more straightforward rock. We knew that formula very well and Howard Benson is a very accomplished producer. At the time, we figured we can’t make the same record four times in a row, and we wanted to chart new territory. We knew we were eventually going to defect back to Rob Graves.

When we finally decided to call upon Rob and see if he was interested in doing an album with us, of course he didn’t think twice about it. Rob has been such a huge part of RED’s sound from the beginning, and we thought that we’re going to go and do what we want to do as opposed to what we think we need to do and think we need to be. We’re going to go where we wanted, and our fans were reaching out and wanting us to entertain the idea of going back to the sound that made us productive in the first place. So we thought let’s do that but take it to the next level.
The writing is much more mature, more than our first album and even our second album.

Let’s talk about the imagery on the album cover. What’s going on with the creepy medieval doctor?
The photo was taken during the video shoot for the song “Darkest Part.” We had some ideas of what we wanted to do with the cover, but the photographers got some people shots we could have in case we needed them or wanted them.

We had this whole idea of a walk through the forest. There is this forest in Poland called the Crimson Forest that we fell in love with. In the Crimson Forest during the fall, the leaves turn red they don’t turn orange or yellow, they just turn red which creates a beautiful blanket of red leaves on the ground. The figure is actually taken after a Middle Ages Plague doctor. Back during the Plague, they appointed certain people to be Plague doctors in charge of helping the sick. They wore these pointed masks that had rose petals and sage, which smelled good, to mask the smell of death around them. They would wear cloaks and carry a stick so they couldn’t make contact with anybody.

We took it and turned it into a metaphor. Artistically, it represents this dark part of our soul that is always with us and it constantly tells us go ahead and do this even though you know it’s going to destroy you. It’s always over our shoulders, it’s always there, it’s always working.

Your tours during the Until We Have Faces era were incredible. You had a giant machine set up, fire and you guys were wearing dystopian costumes. That was really cool to me when I saw you guys live. Do you have any theatrical plans for your upcoming tours?
We’ve always tried to focus on the live show and entertaining people as opposed to staying on stage and singing songs. We like to give them more to look at with a theatrical experience as opposed to a watered down rock show. We’ve always been very theatrical in our music. Previously, we did the machine idea, and this time we’re doing something different.

So it’s a secret?
Well, not a secret, but it’s something you’re going to have to come to the show to find out!

RED was posted on March 11, 2015 for HM Magazine and authored by Jordan Gonzalez.