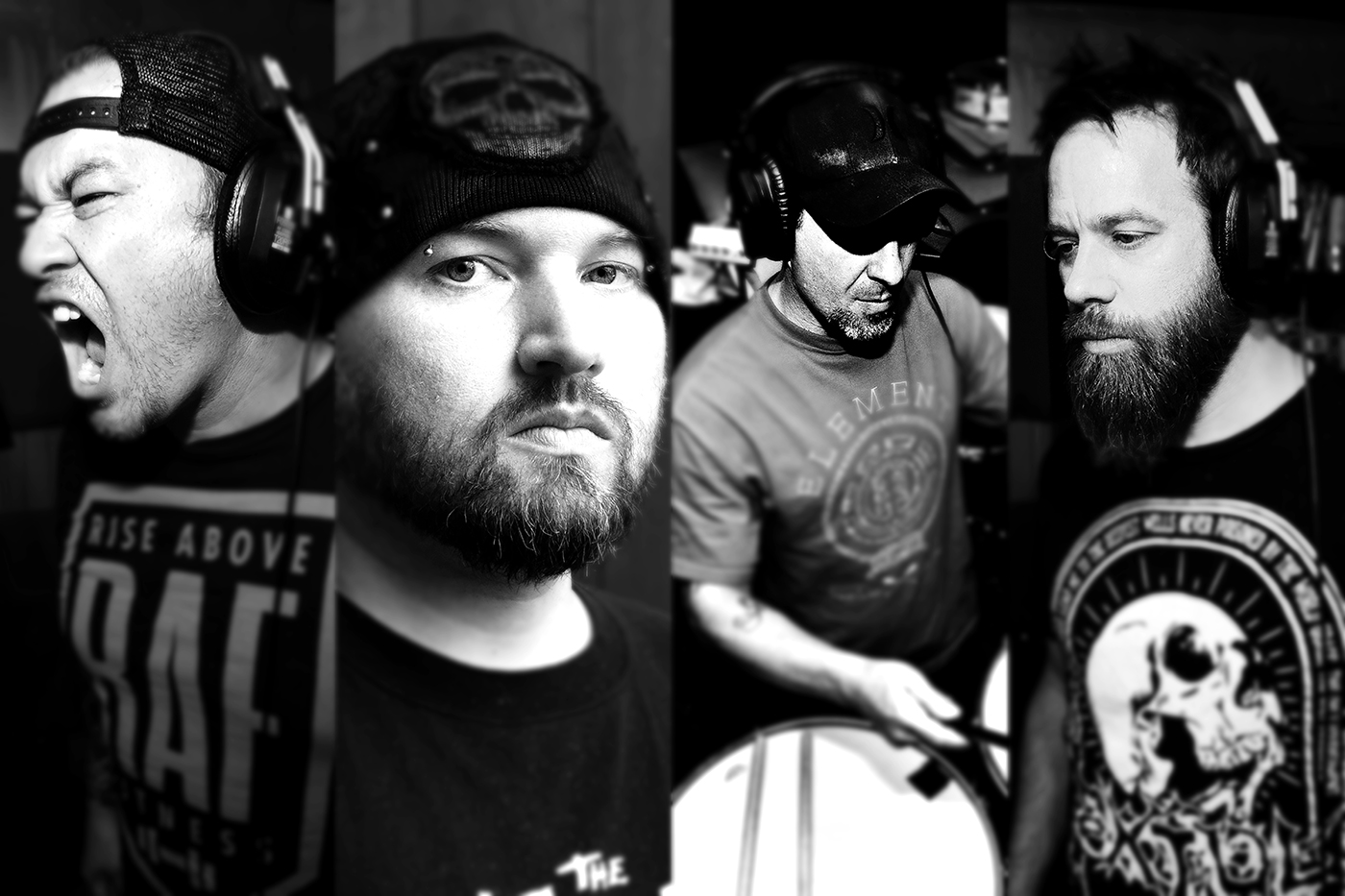 There are only a handful of Christian metal bands that have lasted as long as Living Sacrifice. Though they did break up 10 years ago, they reformed and have been active for the last six years, and the band is still able to write records that you’ll hear again when people pull out their “Best Of” lists. Their latest, Ghost Thief, is a dark record intended to honor the death of family and friends, and founding member Bruce Fitzhugh sat down with HM to talk about the evolution of Living Sacrifice and the process of recording an album over the last 23 years.

Ghost Thief is the band’s eighth studio album, and their fifth release on Solid State records. Lyrically, it’s a very personal record for the band. Early on in the press, Fitzhugh described Ghost Thief as “a reference to the personification of Death. Depending on the circumstance, death can be greeted as an enemy or a friend. We have a few songs that deal with the suddenness and finality of death. ‘Ghost Thief’ and ‘Sudden’ are both inspired by people who died suddenly and unexpectedly — friends of ours or family members that we were close to.”

As a fan and journalist, I wanted to know the back-stories of these songs. “Lance’s father passed away a few years ago (after) his battle with cancer,” Fitzhugh expounds, “and last year, Rocky lost his father as well. We are dedicating this record to them. They were great men who supported their sons in every way they could while they were able to fulfill their dream of being in a touring band. Death can be an amazing thing for someone to greet when his or her time comes. Though we have lost a few friends who have died in their 30s, both (fathers) died unexpectedly in their sleep, leaving behind a family and friends. I wanted to talk about how, in one person’s life, they can greet death as a friend.”

Death can be an amazing thing for someone to greet when his or her time comes.

Being a band that has been recording metal as long as Living Sacrifice has, you get to be a part of the evolution of the recording process. They have had the privilege of recording reel-to-reel on two-inch, all the way to using ProTools and the other amenities recording in digital provides. “We recorded our first two records (Living Sacrifice and Non-Existent) on two-inch tape. Then our third record (Inhabit) was recorded on Alesis digital tape. Reborn was a mix of the two. Drums were recorded analog, then the rest was recorded, mixed and mastered on ADAT. Then, starting with The Hammering Process, we started using Pro Tools.” And as the band ages, the digital process has helped shaved some precious minutes off the recording process. “With jobs and families, we can’t take two or three weeks to record a record like we did when we were 18,” Fitzhugh explained.

Living Sacrifice had Jeremiah Scott behind the board again, but Ghost Thief was recorded in multiple places, the same way the “Death Machine” single and The Infinite Order were recorded: “in three studios and a house. We recorded drums at a studio, in Little Rock,” Fitzhugh explained. “Then, we recorded guitars at my mom’s house, where we write and rehearse as well for tour, which is in Little Rock as well. Then vocals and any other guitars we needed were recorded here in Nashville.”

Now, we understand that we have these great friendships with these very talented people. I knew I wanted Ryan to sing on this record, even before we started writing. I love his vocals and the range that he has.

In this generation, having a guest vocalist on a record is very common, but for Living Sacrifice, Ghost Thief marks only the second record on which Living Sacrifice has ever had guest vocals; this time around, Living Sacrifice was able to snag Ryan Clark from Demon Hunter and Dave Peters from Throwdown. It eventually occurred to the band, and they questioned why they had not had guest vocals since The Infinite Order. “In the early days, we never thought about having our friends do guest vocals,” Fitzhugh said. “We just did not understand the depth of the friendships we had back then. Now, we understand that we have these great friendships with these very talented people. I knew I wanted Ryan to sing on this record, even before we started writing. I love his vocals and the range that he has.” And Peters was a more obvious choice, as LS drummer Lance Garvin was jamming with Throwdown. “A few years ago, Lance started playing for Throwdown, so Dave had become a good friend of ours,” Fitzhugh added.

Earlier this year, Living Sacrifice’s original vocalist Darren Johnson performed a few songs with his old band. Seeing he had performed with the band, I asked Fitzhugh why he wasn’t considered for a guest spot on the record. “I did think about having him on the record,” Fitzhugh admitted, “though it was too late in game when the idea came to me.”

There are so many bands that change their style to gain fans, but Living Sacrifice has already found theirs. But after losing their singer after three records, looking back on the member change, Fitzhugh talked about taking over as lead vocalist. “DJ was a death metal singer. I did not have the range he did. I was not going to even try,” Fitzhugh said. With Fitzhugh taking over, the style of the band changed; they started to write metal that fit his voice. It changed everything, and the band was reborn.

Since then, they’ve had a number of records, but as with every band, it’s a struggle to avoid rewriting their last record. It’s a fight that proves tough for each Living Sacrifice record, since they have eight albums worth of songs in their catalog. It is hard to not reuse parts from old songs. “We have caught ourselves rewriting the same song,” Fitzhugh said. “Sometimes we throw it out, and sometimes we keep it. Depends on how the song is executed. If the guitar riff is played different, and the drums have a different rhythm or beat to it, then we end up keeping it.”

When you have to write lyrics for six records it can be overwhelming as well. “It can be a challenge not to touch on the (same) themes over and over,” Fitzhugh explained. “Our lyrics have changed over the years. … How can I say this in a way that I have not said before? Being poetic and not losing the content or alliteration of the song. Different themes present themselves at a different part of your life. That is what I draw from. I am not writing from the same place I did when I was 24.”

“Screwtape” is the first track off the album, named for C.S. Lewis’s epistolary novel “The Screwtape Letters,” and it proves to be a fitting song to open the album. “We chose ‘Screwtape’ because it had this long intro that turned into a really strong song,” Fitzhugh explained. With the idea of the lyrics being taken from the concept of the book, it fit perfect with the theme of the record. “The book is a great literary tool. I just wanted to have lyrics based on the idea of what happens behind the scenes.”

As with most metal bands these days, the music is not the band’s primary means in life. Living Sacrifice, though not trying to make a name for themselves, still have families and businesses to take care of. “Living Sacrifice by no means pays the bills,” Fitzhugh said, though in this economy, I don’t see how metal pays bills. Living Sacrifice is in a position where the friends can still be in a band without having to be on the road nine months out of the year. “We are not 18. We have families, houses and kids of our own to think about now,” Fitzhugh admitted.

One of those songs that come with age is “American Made.” It delves into the concept of the Christian faith and nationalism, and Fitzhugh explained why it was important to write the song, as it challenged him as well. “The idea behind the song is Christians taking the American dream and interweaving it with

Christianity, which doesn’t work,” Fitzhugh said. “Some Americans hold their love of country as much as their love of God, along with holding ‘being American,’ and (holding) the American dream over the call of God in their life, of being a disciple to the world.” Fitzhugh admits the writing of this song comes from his personal convictions. “I am guilty of some aspects of that, seeing I own my own company,” he said. “Being a businessman, I do try to find ways to make my company more profitable, focusing on how to make it better – though I don’t want to glorify a lifestyle that God cares nothing about.”

Living Sacrifice was posted on November 6, 2013 for HM Magazine and authored by Rob Houston.