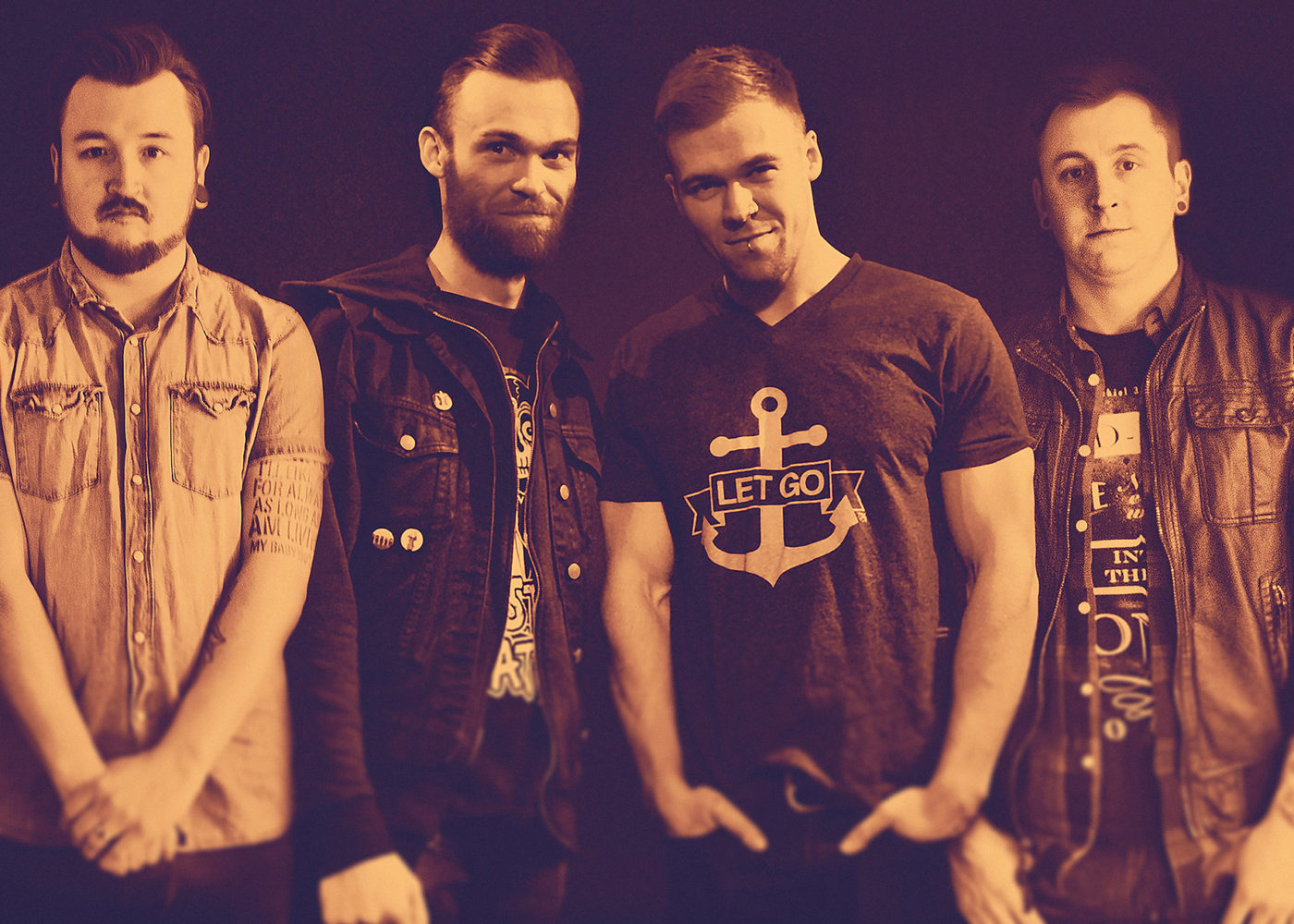 On the heels of releasing ‘American Ghosts,’ lessons is primed to take 2014 in stride

In 1999, Dave Hostetter, Jr. started a band with his brother, Seth, and sister, Lee Marie. They went on to become incredibly successful, touring to this day. Children 18:3 released two EPs and three full-lengths, and still draw a large crowd with their incredible talent (Seth is one of the best drummers around), clever songwriting and energetic-but-approachable live show.

But with his heart firmly planted in metalcore, Dave, off to find like-minded folk, happened upon the Snells. Sans sister but now with the Snells, the male Hostetters make up half of the band Lessons. The other half is guitarist Chad Snell, a graphic and web designer and former member of the band Take Cover, and his brother, vocalist Jeremy James, more commonly known as J.J. Here, Justin Croteau talks with the frontman about Lessons’ plans.

Justin Croteau (HM): What can we expect from this EP compared to your debut? What new ideas are on the table for this one?
J.J. Snell: Well, with that first EP being our debut, we just wanted to get things started. In that situation, you aren’t going to be able to try everything you may want to. With your debut — when you’re recording it — you love every song. Now that we’ve had some time to look back and really focus in on our sound, we got to reassess and key in on some different elements — like Seth’s drumming, focus in on some more melodic choruses and have fuller sound.
I think with hardcore, even though we certainly fit in with the cliché of that genre, it can sound flat and we didn’t want to fit in with that. We wanted to bring back a really strong, full sound on this album, as well as fine tune some things and bump up our game quite a bit.

All of the band members in Lessons come more from a punk and hard rock background. What brought all the members to play in a metalcore/hardcore band?
All of use grew up listening to hardcore and metal, it’s just something that’s always been on our iPods or what not. So for us, doing something out of the ordinary was really just amazing and really refreshing.  And so we did. It wasn’t really anything specific; we just all said, “Let’s do this.”
We’ve never really tampered with it before, but let’s do it and let’s do it right.

So how did you and Chad get together with the boys in Children 18:3 (Dave and Seth) on this? What’s the history on that?
Well Chad, my brother, and I started to think about this the two of us at first, and as we continued to think about it, their names just came to mind. I’d met them probably five or six years ago through the music scene here in Minnesota, doing promoting and such at the time. I met them through random concerts and got to know them from there. They — and their whole family — have become really good friends of mine, so when it came time to do Lessons, they were the first guys to come to mind.

What’s the environment like having two sets of brothers together in a band?
It’s actually really good because we can all communicate so easily and freely together. We’ve all been in bands with other people, and being in a situation like this makes communicating easier — and certainly sleeping in a room together easier, you know, you just know each other better. It even makes arguing together easier because you know it’ll get resolved and in the end it’ll all turn out fine. It’s phenomenal.

Now, you all said you grew up with Hardcore and metal, so what were the major influences to Lessons musically?
Ah man, that is always such a huge question. We really wanted to capture some of the stuff we listened to 10, 15 years ago. We listened to a lot of early Ferret Records’ bands and some early Facedown bands, early Norma Jean … Man, I could even go back to early ’90s listening from early Korn stuff leading into early Killswitch Engage.

It’s just so hard; even some of the current bands today have such a huge part because we try to capture some of the sounds we grew up listening to, but still staying current and trying to bridge that gap a little more. Bands like The Ghost Inside, Gideon, even A Plea for Purging. Some of their stuff is just fantastic.

How much do you feel your other project, like Children 18:3 and Take Cover, have seeped into and influenced Lessons?
I definitely think, music-wise, yeah. The writing is completely different; you don’t find many hardcore songs with the same structures used in those other groups, but we try to bring that in a little.

I think the experience we have of being in the music business as long as we have has definitely affected it as well. We made some mistakes in the past, and we don’t have to make those mistakes again with Lessons.

What was recording like on this EP? What where the differences between the two EPs, recording-wise?
The writing style was a little different. We all live about three to four hours from each other, so we don’t get to see each other all that often. We mostly work on the music on our own and send ideas back and forth.

We started all this about nine months ago, and when most artists start, they tend to write music around the lyrics, and I think we kind of did that backwards. We really wanted to find the emotion in the music first and write to go along with that emotion. It was a lot — like I said before — of capitalizing on what had worked before, and then improving on a lot of things like the choruses and strumming, so.

What challenges or liberties have you guys faced being an independent band (without a label)?
A lot of the challenges are money,, but it’s also promotions and promoters. Those are two big things that labels provide. But, like I’ve said, we’ve learned a lot from being in other bands so we decided to use that knowledge to pave the way as artists.

Finances can be hard, and it’s been a little rocky. About a year ago, we had our entire computer system stolen. About $10,000 worth of equipment — stolen.  So when stuff like that happens, you don’t have anyone to support you.

But even with all that, we have come out ahead. … Now we can look back at it and we couldn’t be happier with how it turned out.

What can we expect tour-wise from Lessons with this new release?
We won’t be on the road too much; we’ll always be doing Midwest shows and close-to-home shows any given weekend. Tour-wise, we’re looking at some time next year with a few bands we have been talking with, but winter is always a tough time because the roads can be pretty scary (laughs).

How have you, as veteran musicians, learned to balance the family life and the tour life?
Family is always first. Every time we have been on the road or gone out on the road, it’s always been like, “OK, Lord, is this really what you want us to do?” So we really had to do it at the right time and make sure everything is provided and available for our families.
And we’ve always got to make sure the runs aren’t too long, usually two or three weeks so we aren’t away too long. Like I said though, family always comes first.

What would you say is a must have in your personal touring survival kit?
Let’s see… Pretzel M&Ms, a charged phone for Clash of Clans and give me an energy drink. With those three things, I could tour for quite some time.

What is one of the funniest or most interesting stories you’ve had on the road touring recently?
We played in a church foyer in Wisconsin, and I thought I was going to get lit on fire during our intro. That was pretty wild. I watched a video of it, and right behind Seth’s head, it read “Nursery.” So here you have these four metal guys playing chuggy stuff with the word nursery behind them and Seth is just lighting his drum set on fire, lighter fluid spraying everywhere. I seriously thought God was going to strike us down right there.

It was about as sacrilege as it gets, but we survived.

Lessons was posted on December 7, 2013 for HM Magazine and authored by Justin Croteau.