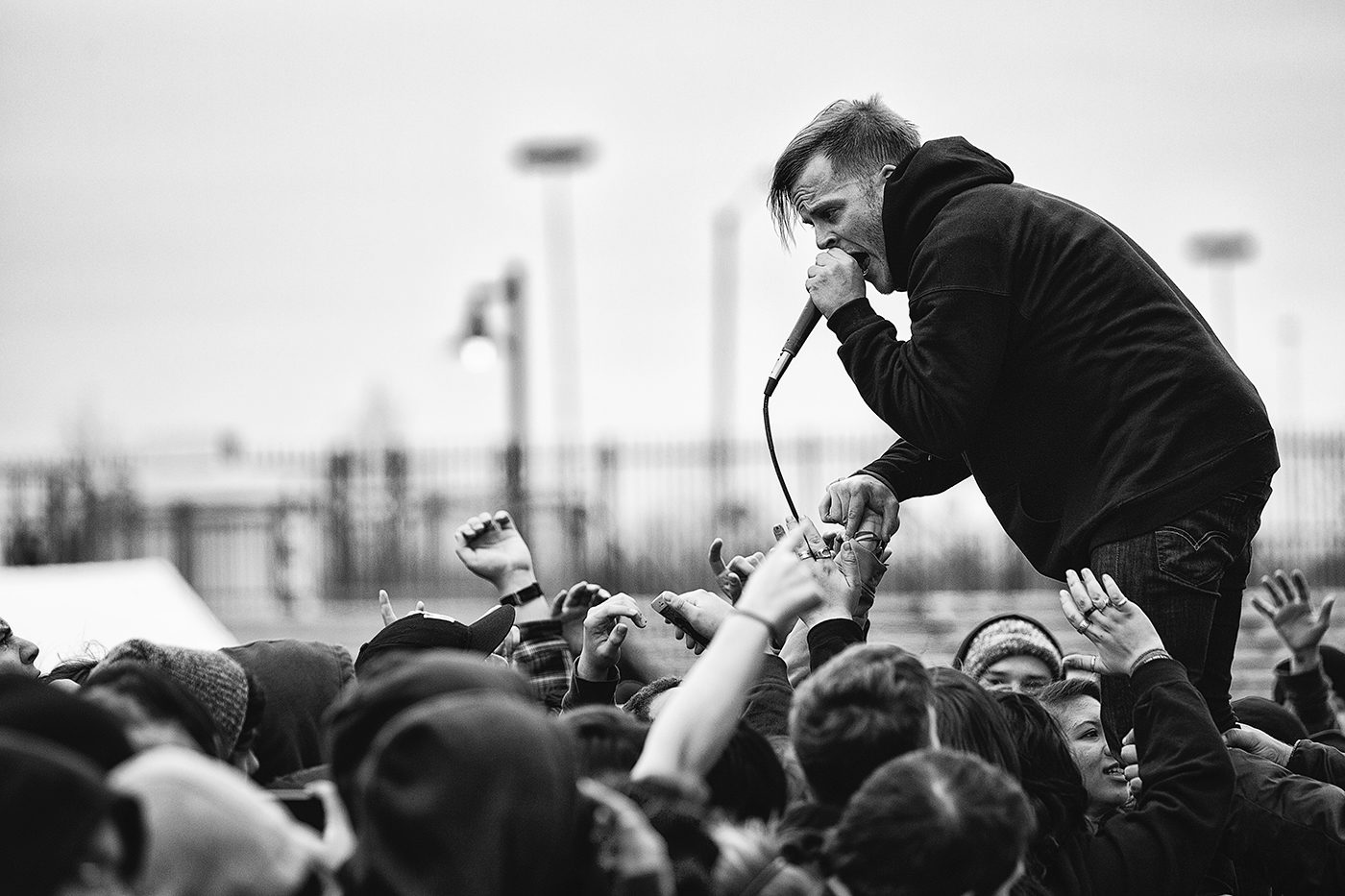 On the Road with Hundredth

On tour with Stick To Your Guns and Terror, we take a phone call from vocalist Chadwick Johnson

So how has the tour been going?
We just started a few days ago, but it’s been incredible so far. We played Salt Lake City last night, and we’re in Denver right now, heading to Lawrence, Kansas for tomorrow.

That’s great, man. So Resist came out on March 25. Tell us about the concept for these two EPs you’ve released, with Revolt and Resist.
The first EP, musically, is harder and a bit more chaotic. (Both EPs) really touch on some of the same things, but the second EP is a bit more melodic. They both talk about the same subject from different standpoints. The first EP is more — it’s kind of just in your face the whole time. It’s about what’s going on in the world, why it’s f-cked up. It also tries to state truth throughout it. I guess it’s more of a statement of why things are f-cked up, like an outward look at what’s f-cked up and why it is.

With Resist, it kind of just chills out; it’s more melodic, and it says wait. Instead of pointing at everyone else and saying what they’re doing wrong, it’s more of a turning in and looking inside yourself and realizing you’re just as much a part of the problem as everyone else is. That’s kind of the duality between the two.

Were you going for that split? Did you record it all at the same time?
We recorded all the music for it at the same time, yeah. Vocals were done on two separate occasions.

So it was recorded like a full-length, but you decided to split it.
Yeah, we could have put it on one full-length, but we thought that it was so drastically different, and we’d get our point across a lot better if we split it up in to two separate EPs. Instead of doing one album cycle for, like, two years, we decided to split it up and do a little bit at a time. The first EP came out in March of last year.

What was the recording process like?
We went to The Blasting Room in Fort Collins, Colorado and worked on the EPs with Phil Stevenson, our producer. He’s the drummer for The Descendants; he was in Black Flag, and he’s worked with a lot of incredible bands, so working with him was awesome. … We’d been doing pre-production for it while we were on tour, so we went into the studio and did all the music in a few weeks. Then I tracked vocals for the first EP, and then flew there on my own to track vocals for Resist. I think that was summer of last year.

How would you say your music has changed or matured since the first two full-lengths in regards to these two new projects?
We’ve always been a fan of moving on to the next thing, trying out new things. We said from the beginning we never wanted to write two records that sounded the same. It’s a safe move for bands to do that, and a lot of bands do that. It just gets boring though. I like to see a band, over the years, become something new every time they put out a new record. They’re not trying to be something they’re not, but you can see what influenced them a little more during certain time periods.

I can’t tell you anything we (actually) did differently, but I think it encapsulates what we’ve been about since the beginning, and that (gets stronger) with each record. It’s more of a natural maturity, I guess. We wrote our first record when I was 18. Even lyrically and where we are as a band, as far as our beliefs, it’s a lot different than six years ago.

So what is that mission, for you as a band?
There are a lot of bands who have a lot of things to say these days. That’s cool, I think. I’m down with that, as long as it’s real. Our main thing is we just want people to not be afraid to question everything they’ve been taught. That’s because, I myself felt like, at one point, not purposefully but geographically, I was a victim of indoctrination. It’s a big claim to say you’re “coming from” something.

I don’t want to claim the role of a victim, but I feel like a lot of people are looked down upon if they don’t believe the same things as the majority of people. So that’s a big focus for us as a band. Squashing anyone who challenges us as band, and to the people who follow us as a band, to not be afraid to look past what they’ve been taught. Search things out for themselves. Encourage people to keep freedom in their minds. That’s been our focus since the beginning, but it’s been a transition, for us, of whether we focus on a creator, or a god, we focus on who God is inside of us, taking a spirituality stance.

I’ve seen a pattern with your music, through the first two full-lengths as well as the EPs, that you tend to have a seemingly even amount of both super short tracks and longer cuts, from a minute and a half to almost five minutes. Is that a conscious thing when you’re writing?
I think we just focus on making a song. If it’s a quick song or the lyrical content is pretty quick, we might think it’s cool to just end it there. We don’t really go out and think, let’s write a minute-and-a-half song. We think more along the lines: Can this transition into another part? Does this sum up what the song is about? If that’s two minutes, let’s end it here.

I tend to gravitate more towards the first EP with the shorter cuts. It feels more like who you guys are.
Right, and that record was more to that point. It’s more no holes barred. We were into making fast songs that were just in your face. One after another.

I really enjoyed Revolt for that aspect, but I find myself enjoying Resist more, it’s a bit more structured and melodic. The transitions are great.
Thanks man. Actually, it’s funny, I really didn’t expect it do — I don’t know. It was kind of weird for us. These songs are weird. We like them, but we don’t know how people who actually like our band are going to like these songs. We tried some new things. We just said, f-ck it, we weren’t trying to please anyone but ourselves. We just wrote new music that we liked, and we experimented on some stuff. Personally, I had low expectations… There’s been some really good response so far. Truthfully, that’s blowing me away. I thought people were going to hate it. I don’t know why. I just thought people (were) going to hate it.

I think the way you approached it was better, too. There’s always a question of, is a full-length album a better choice than shorter EPs? But with how quickly music is being consumed, you’ve managed to stay relevant and in front of your fans for a longer period. It’s not like you’re putting out anything ridiculous.
Yeah man, I agree.

What do you guys think of how the music industry has changed over the years? More bands are trying newer things, adding electronics and synths and different effects, and each record you guys have pretty much stuck to your style.
I don’t really think we pay attention to that sh-t, to be honest. There’s so much awful music we play festivals with. I’m not trying to be a d-ck, but I can’t believe kids like these bands. It blows my f-cking mind sometimes. They have no backbone lyrically, they don’t stand for anything other than getting f-cked up or spreading a plague across the scene. We hate it so much, we just don’t even pay attention to it. We try to keep that as far from our radar as possible.

Hundredth was posted on April 4, 2014 for HM Magazine and authored by Justin Mabee.