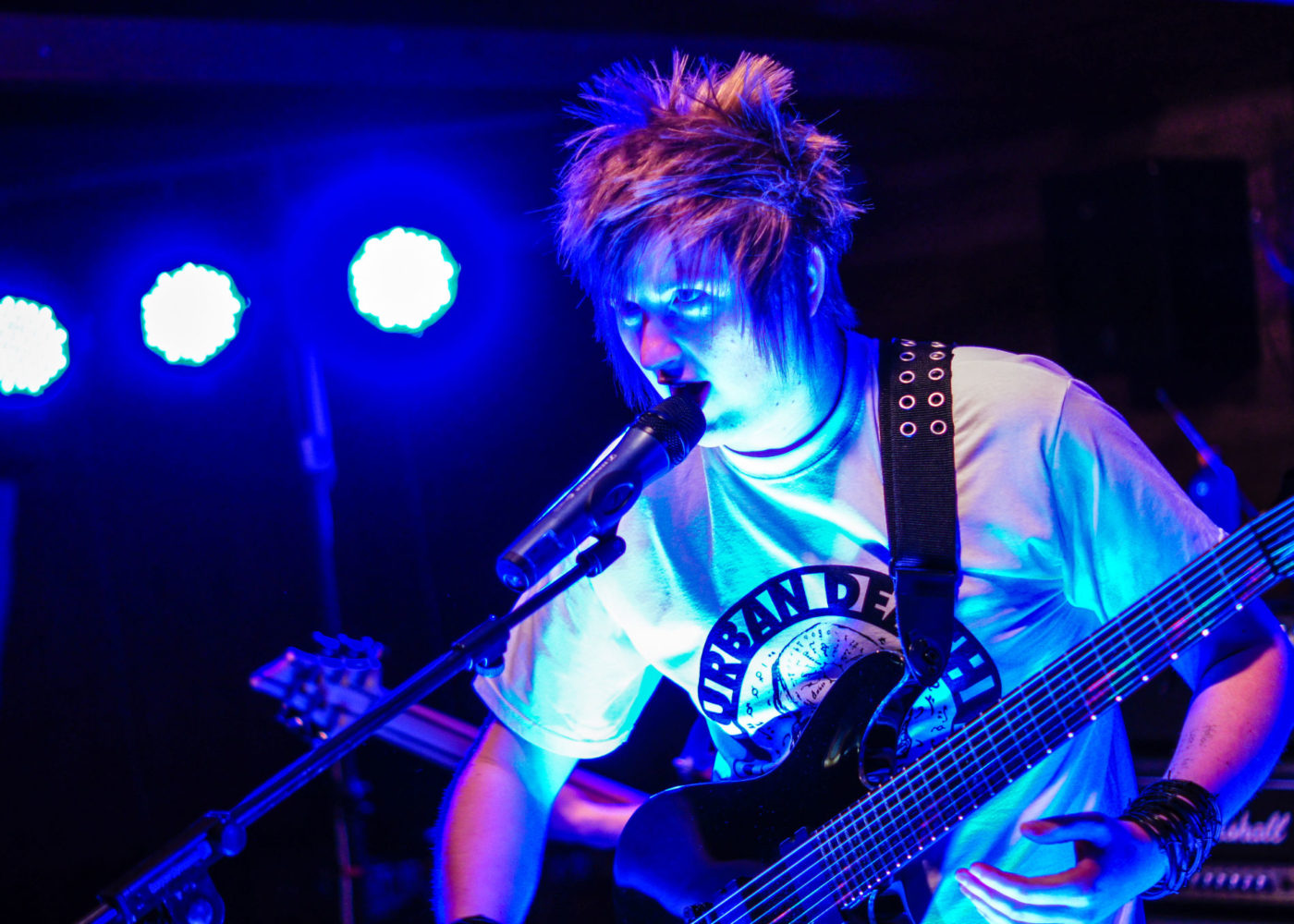 ForChristSake are titans in the Extreme Metal world, but you’re still a relatively new band. Let’s start by having you give us a quick history of the band and how it’s come to be ForChristSake as we know it today.
The band started out as a proper unit in 2008. We practiced and rehearsed for 18 months, then we went in and recorded Death Is But A Breath Away. We thought this would be a good idea to have recorded product before gigging, which was the right decision and proved fruitful for us.

Our first gig was supporting death metal band Desecration. It was a bit like heaven and hell; we got great and positive feedback playing that night.

Our initial line up was Guy, Seraphim, Simon, Ignatios and Mark, but we we have had a few lineup changes. The unit today is Ben (guitarist, vocalist), Simon (lead guitarist), Ignatios (drums and vocals) and Mark (bass), and this is the unit that went in and recorded our debut album, Apocalyptic Visions of Divine Terror.

Apocalyptic Visions of Divine Terror has been announced for a late January release. What can we expect of this release as fans?
The album covers (front and back) were done by a great Canadian artist called Shaun Patterson with the input of the famous artist Dusty Peterson. After that, you get 16 tracks of over 70 minutes of extreme metal mayhem!

The album will be released on Roxx Productions on Jan. 2. We are hoping to do a full show dedicated to the album on “Beyond the Riff” with Brian Bishop on Jan. 18; we will be playing the whole album and explaining the meaning behind the tracks and the album.

What was the writing/recording process like for the album? What where some of the challenges you guys faced with the record?
The recording process was a very stressful time for us. The first engineer that we employed really caused some problems for us and because of this we missed our first release date with Roxx which we were extremely upset about. Bill Roxx was very gracious and understanding about what was going on and has been a constant support through the whole process. It took some time to find the right studio to finish off our album and we hope you all like what we have come up with. Some of the songs are a few years old and have been in the FCS riff fridge awaiting to be defrosted. As a few examples of what the songs are discussing:

What where some of the bands biggest influences musically going into this record, or in general? Are there any tracks on this record that really stand out as a favorite, and why?
Influences are a mixed bag, from Christian to secular bands such as Deliverance, Drottnar, Gojira, Crimson Thorn, Horde and anything else that is good. But we cannot say it has influenced this album because we have diverse tastes that are hard to pinpoint.

On the album, Mark really liked “Inhalation Asphyxia” because of the subject matter and the juxtaposition of the vocals and the heaviness of it all, while Ignatios chose “Shadow” saying, “I like the song as a whole — musically and lyrically — and I think anyone listening to the track that has struggled with suicide will be able to identify with the lyrics and hopefully gain solace from it.” Ben really liked “Necro Nemesis” because it was the first song he contributed to in the band, and Simon chose “Last Call” because “it’s just a good song to me, it has a special meaning for me personally.”

Can we expect any featured artists on the record? What artists would ForChristSake like to bring in a record?
No featured artists this time round, but to be honest, it would depend on the song. In the past, we wanted to have Jesse Leach of Killswitch Engage just (because of) his vocal style and singing ability.

Can we expect a tour in support of the record? Maybe in the U.S.?
Hopefully! We are trying to get something sorted out with the guys from Drottnar in either Europe or the U.K., and we have been speaking to the organizers of Blast of Eternity and some other festivals. We would love to grace the stages of these festivals, if possible. Last year was such a blessing as we got to play at the prestigious Elements of Rock in Switzerland; it was great sharing the stage with the likes of Horde, Drottnar, White Cross and labelmates Inner Siege. Also, we would love to come to the U.S. and have had many requests, but it’s always about finances.

Who is on ForChristSake’s wish list of bands to tour with?
A Hill to Die Upon, Pantokrator, Drottnar, Extol, Tourniquet, Gojira; the list is endless.

Your faith obviously plays a huge part in your music, would you say your faith comes first and the music is built around the message, or vice versa?
The two go hand-in-hand. It’s like when someone asks if you are a Christian band or Christians in a band, we always say we are both. We always try and have the lyric/music complement one another; hopefully whenever people listen to our songs that is portrayed.

If you had to describe ForChristSake to someone who has never heard of the band before, how would you describe the band/music?
The best way that we describe ourselves is extreme metal with a positive message. The best way I would describe us is to come and see us live, and then you can judge for yourselves.

For us as a band, our walk with Christ is very important to us and we would like to think it is reflected not only in the music we play, but we also feel, as Christians, there are other subject matters to tackle from a faith perspective and not just your typical “turn-or-burn” message, which we have found turns people away. Reflecting the light and the love of Christ always has to be evident in a believers life.

ForChristSake was posted on January 17, 2014 for HM Magazine and authored by Justin Croteau.