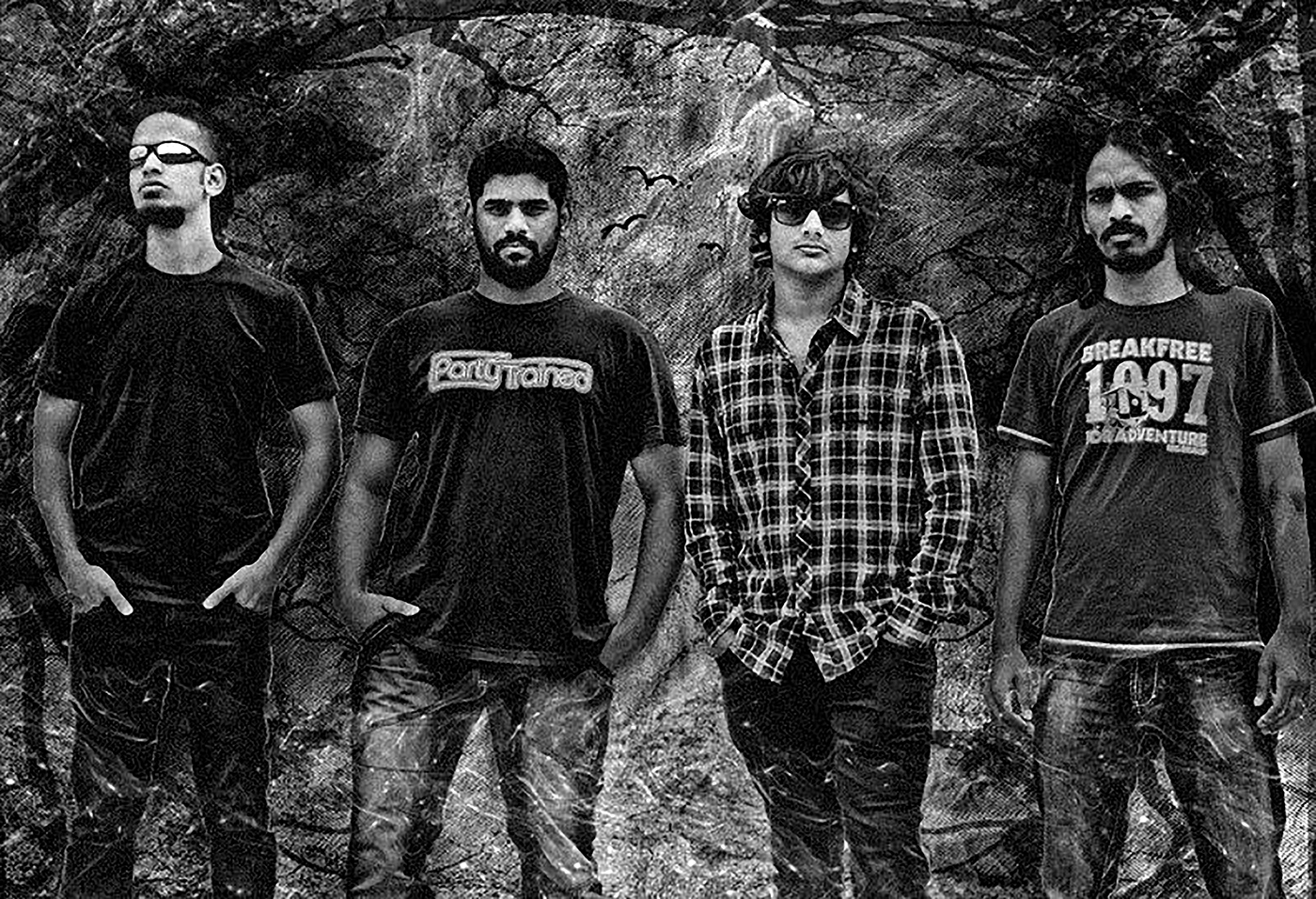 The best metal India has to offer

Bangalore is often referred to as the “rock/metal capital of India” because of its underground music scene, and I got a peek at it when meeting with Final Surrender – native to India – to discuss the band’s new full-length album, Empty Graves. No one likes rising with the sun on a Saturday morning, all merits to time zone differences, and it wasn’t enjoyable when our cross-country connection kept crashing, therefore threading the interview out over three hours.
Though I found it too early for my strengths to be tested, I was genuinely surprised by how sensible and sincere these guys remained. Don’t be tricked by the intensity they pack into their tunes; their sensible manner was not only reflected in their music, but in the interview as well. It was exactly the kind of “practice what you preach” intentions we all desire from our musicians, right?

Between the frequent call failures, we also talked over what it’s like working with a label halfway around the world, what drives them to play the music they love and how overcoming further trials have helped this band develop in other aspects. While Final Surrender is a faith-based band, don’t be surprised if you find this band moving you in other ways.

So tell me a little about Final Surrender and how the band got started.
My drummer Jared and I started recording demos around late 2007, and from there on, one thing lead to another. We put members together one-by-one, and it fit impeccably, like a jigsaw puzzle. (Jared and I) had this passion – strongly, in a sense – to play metal music, and we started off as a two-member project with no name or such, and so we decided, “Why not take it to the next level as a full-fledged band?”

Where did you meet your group and how long have you been together now?
We were all musicians playing in different bands, and we shared a mutual friendship playing together in the music circuit back here. But the band came into existence as a whole towards the end of 2010.

What drew each of you to work in that genre?
Purely just for the love of it. On a lighter note, it was also the challenge of playing complex rhythm structures.

How has your music evolved since you first began playing music together?
We’ve grown to respect our music a lot more than we did; we’ve always thrived on intensity, so it’s good to progress in that direction.

Does anyone in particular influence your artistic/musical talent?
There are a lot of artists, actually, since each member is influenced by different genres, but I think this taste for raw, intense and aggressive form of metal is probably the common ground we share. More than anything, it’s our relationships with Jesus that plays the biggest role in regard to influences.

What inspires you to play music?
Life. In all its eccentricities and contrasting beauty!

What are some of the biggest obstacles working with a label from Indiana?
The distance we live from each other (laughs)! I mean, it’s been a cluster of things. To break it down, I’d say it’s been more of a learning experience working with the label because you tend to push (things) up a notch. On those lines, not all bands get to be on a label. I think it (is) handy to trust your music, followed up by a similar vision as to why the label wants to work with you. With that said, I think we have been having a great time so far working with Rottweiler Records.

How does the response internationally differ from the response you receive back home?
Not a lot, actually. It’s been nice at home, and eventually people getting to know you internationally make it more interesting and adequately expands the knowledge behind how different people perceive our music. It’s a great feeling to know that people around the world actually dig some your stuff.

Where do you think your largest fan base is located?
As of now, Bangalore, but I think that’s going to expand pretty soon. And yeah, there are few cities in India we’ve traveled to that has a fan base for us, like Bombay, Delhi, Mysore, Nagaland …

What’s the furthest show from home that you’ve traveled?
The furthest is Nagaland, which was a circuit of 5000 KMS (about 3000 miles) from home. We did this northeast tour in the year 2011, which was actually pretty far. Took us roughly five days and four nights to get there. Phew! Nauseous just thinking of it.

How do you promote your band and shows?
We’ve done that so far via social networking. We also have other protocols, such as flyers and ads, hard copy materials, news and magazines that go around the particular town or city when we play a gig.

Do you have any favorite songs off the new record?
Well, I think that would be very unfair to name any one, or a few songs in particular, since each song on this record has, by itself, been woven intricately in our lives. These are, like, a couple of slices from our lives, so yeah we love all the songs on this record. Each song has its space in different spheres of our lives.

How about the songwriting process? Where do you usually gather songwriting inspiration?
We love spending time at the studio and working on new material; it’s another excuse to (hide) away from all our regular lives and jump into the realms of divinity. We do not limit ourselves in terms of inspiration; we’d like to keep options open. Sometimes it backfires, but, hey, that’s the beauty of it.

Describe the process of recording the full-length. Was it recorded in your home studio? Was the album self-produced?
We recorded at Xandrin Studios in Bangalore, which is run by our drummer Jared. It’s pretty much our base; we jam and record there. Rocky Gray from Living Sacrifice (ex-Evanescence) produced this record.

Did you incorporate any original Indian instruments into this album?
Yes! We used instruments such as the sitar, sarangi, flute, recorder, Indian choral Hindustani and Carnatic Alaaps, as well as an entire chamber orchestra.

What are your songs about? Any specific themes they cover?
Every song is interconnected to the title track, “Empty Graves.” It basically revolves around the intense moments of pride, pain, remorse, defeat and meaninglessness, and through it all, how God can restore our lives through his unconditional love.

Before I get into the details, I’d like to share how this title, Empty Graves, came about. We had been working on this album with the title Refresh in mind, but one day, when I was having a regular conversation with God, He revealed something very inspiring. I was on my regular barrage on venting my frustrations, and He asked me what is the core of Christian belief, so I replied it was the resurrection, which makes the difference of Jesus conquering sin in its vain glory. That’s when I realized that the term “empty grave” is not attributed to anybody in history other than our Lord Jesus.

Now, the next thing struck me with shame. He showed that we, as His followers, are not walking in any victory; rather, we accept defeat and end choking up on our problems, and maybe end up in redemption by the skin of our teeth. We weren’t meant to live life like that, so I realized that God wants us not to be buried deep in our agony, but rather in victory through Him, and that it is possible only when we learn to accept it.

Most bands would say that every record is better than the last; does that hold true for this album?
Sadly, yes. That’s because it’s challenging to keep your fans excited about every new song you write. It needs to be fresh, and you have to think different to make a difference.

Do you have any plans for touring this album in the states?
Yes, we are looking into that for early 2014. We’d love to be in America.

What do you think your greatest opportunity has been so far in your musical career?
Every day has been a miracle for the band. God never ceases to surprise and pamper us.

What’s your ultimate direction for your band? At the end of the day, what does success look like for you?
It’s just been about following Jesus no matter what. Success for us is not limited to materialism. If people walk out of shows with nothing else but Jesus on their lips, I think we’ve done something right.

Above all, we want to share the love that transcends through Jesus more than anything. That’s the key.

It’s an everyday process, and yes, it will never cease until we die. Amusingly, not a lot of things stay with you until death, regardless of victory or defeat.

Final Surrender was posted on November 6, 2013 for HM Magazine and authored by Chelc Eaves.