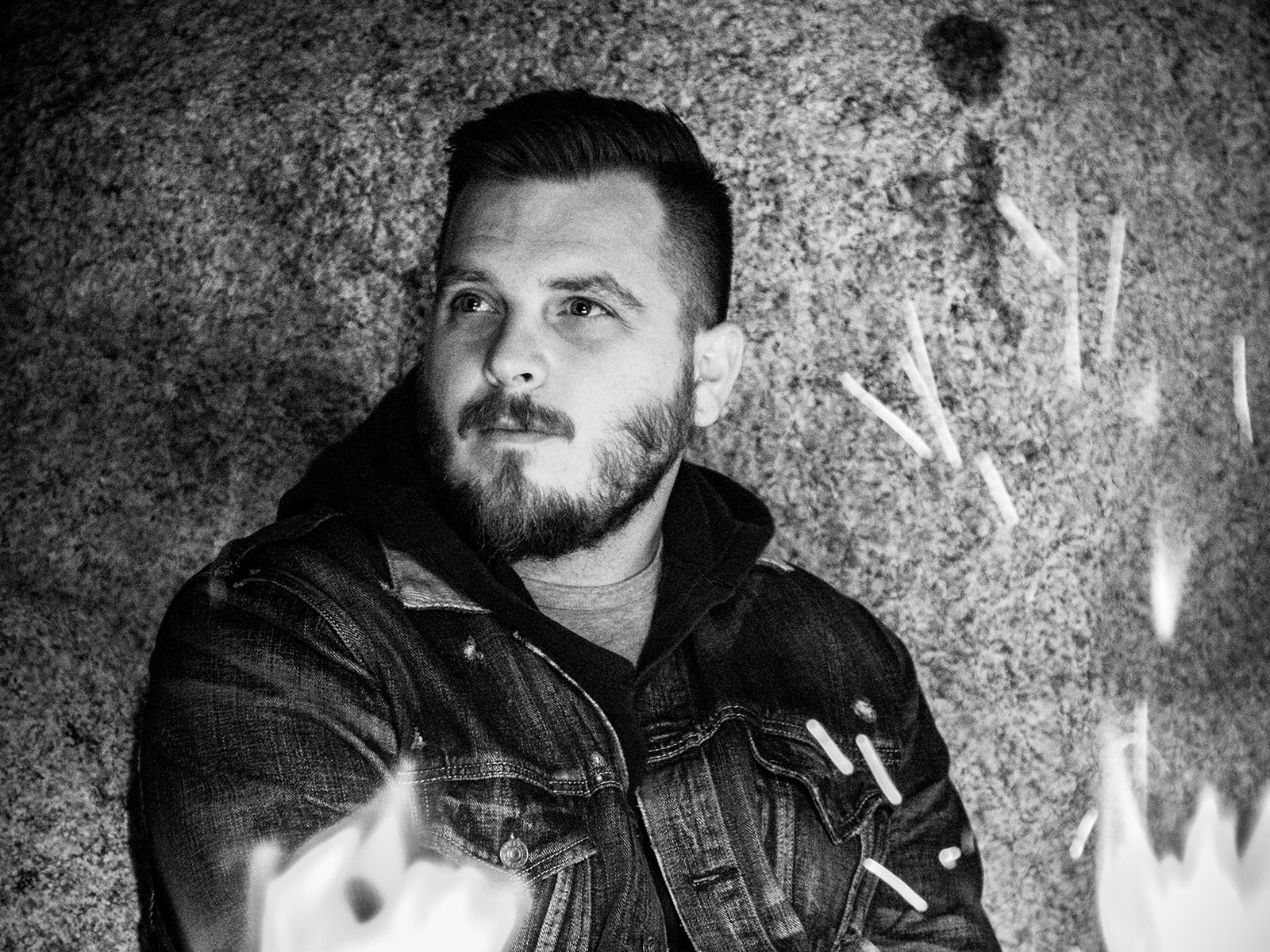 Ask any person about the artists the love, the actors they admire, the people they align with — you’ll find there’s one thread that will run through them all. Our hearts and minds are hardwired for it: authenticity. We look for integrity. We desire realness.

Dustin Kensrue’s career has been defined by authenticity. The earliest albums from his first band, Thrice — who recently reunited after three years of being on hiatus — showed a man’s bare heart, sharing all of his doubts and struggles. Later in his discography, we would see a mature Christian who isn’t afraid to talk about the hard stuff.

His first solo album — a stripped-down, Ryan Adams-style folk album called Please Come Home — showed a different musical and lyrical side to the Thrice frontman. It was one more overtly Christian and more conversational in nature. A few years later saw Kensrue becoming a worship pastor at one of the largest congregations in the country, an empire that was highly scrutinized and crumbled very painfully and publicly in 2014.

With his newest album, Carry the Fire, Dustin Kensrue provides a more diverse and expansive follow-up to Please Come Home. We were able to speak with him about his current mindset, surviving church drama and what it means to be authentic.

You’ve said that Carry the Fire  is the proper follow up to Please Come Home, but you’ve put out a few records in between, under your name as well as The Modern Post. Can you explain a little more what you mean about this being the actual follow up to Please Come Home?
It’s coming from the same head space. I don’t know. It has a similar purpose in that it’s not a worship record. That’s probably the easiest way to say it, to clear up confusion. All of the worship stuff is going to be “rebranded” under The Modern Post at some point this year. It’s the record, in my mind, that follows up that record. It’s a record I’ve been trying to make for a long time.

There’s still that heavy spiritual, Christian nature to the lyrics, but it doesn’t feel like an overt worship record. You can tell there’s a lot of personal stuff in there too.
Yeah, I tried to describe it as the difference between anything else I’m doing and a worship record is the purpose for which it’s written. There’s obviously a purpose for corporate worship music that dictates a lot of what you do — or should do, in my opinion. This is just another solo record.

Musically, it’s a lot more diverse than Please Come Home. That record felt really stripped down, and, even though there were some full-band songs, it was still you with an acoustic guitar and a raw sound. On Carry The Fire, I think of the title track being more anthemic, “In the Darkness” almost feels ’90s alt-rock, “Death or Glory” is Springsteen-like and “Gallows” sounded almost like it could have been on Thrice’s Beggars. Was that intentional? Did you set out to write a more diverse album?
I think I wanted it to be more diverse. It also ended up being the combination of two projects I was working on. Well, “working on” is a loose term. I had two ideas in my head I ended up smashing together to make this. I was finding it overly restrictive trying to say, “This is the folky, Americana record and this is this other thing.” I also didn’t really have time to finish both projects, so I ended up just deciding to combine them and see what happens.

It still feels consistent, doesn’t feel like anything is out of place. It’s just so diverse. I think it works really well.
Thanks. That was one of my concerns as well. How I was going to make it all fit together? I think it came together in the end, but it was definitely worrying me.

Please Come Home had a little bit of help from Teppei (Taranashi, Thrice guitarist).Any Thrice player cameos on the new one?
Nope, it’s all me.

You mentioned purpose. I understand the idea that corporate worship has a specific purpose that’s very different from your solo material, but is there any element of ministry to your solo material?
I like talking about “purpose.” There’s a very specific purpose to the worship stuff, and, because of that, there are all sorts of blurry lines with everything else. Not even blurry; that’s the wrong way to say it. Whatever I’m doing, whatever art it is — I want it to be integrated with who I am and flowing freely out of that. Whether there’s a more specific purpose or not. There’s no hidden or larger purpose other than to create good music that I like, that I feel is important and will hopefully connect with people.

Am I thinking about who’s hearing it? Always. And that doesn’t mean I’m making it to please someone, but I’m aware of the variety of the people who will be listening to it, and that’s going to affect the way I write a song.

I think it’s an interesting question because it opens up this bigger topic of what does it mean to be a Christian or live a Christian life. I think people make these false dichotomies — in their actions, their schedules, whatever — where they are going to be a different person to different people at different times. It’s a lot of work and it’s disingenuous and people can feel it. So I think there’s a lot to be said for having an integrated approach.

That word, “integrity,” we use it to describe a person who is upright, but the root of that word is a oneness. This person is one person, not two people.

Pure authenticity.
Yeah. I want my music to have integrity in that sense. To be who I am. So in that sense, there’s not really a separation between the worship records and this record, other than that “purpose” piece. In the same way that if I wrote a marching song, it’d have a specific purpose, even though it’d still be what I’d write just as a marching song.

“Whatever I’m doing, whatever art it is — I want it to be integrated with who I am and flowing freely out of that.”

If I were to describe your career based on your lyrics alone — integrity and authenticity would be the words that come to mind. The early Thrice records seemed to explore your spiritual journey in a harder, more doubtful place. Some of the later records, it seemed like you were thinking more about bigger theological concepts. Watching your spiritual journey unfold through your lyrics and albums has been meaningful and really unique. You don’t see that a lot.
Cool. Thanks man.

A lot people tend to feel duped when an artist doesn’t describe their music as “Christian” but lyrically feels like it. Most of the Thrice fans I know are absolutely not Christians, but still love your solo stuff — even some of the worship stuff — and love what you have to say from a spiritual point of view. Do you feel like you are in a unique position?
I think a lot of it has to do with integrity. When people feel like someone has an ulterior motive, even if that motive is a good thing, it feels disingenuous and turns a lot of people off. It puts walls up. I think integrity has been a huge part of it.

I think another part is that we haven’t really been a part of any kind of… There are a lot of bands who play the Christian circuit who aren’t Christians. Or they play music that has nothing to do with their beliefs but is just marketed a certain way. We’ve never really done that. The closest we’ve come to that was Vagrant — our label, which is by no means Christian — wanted to market some of our stuff to Christian radio. We were like, “Sure, whatever.” That’s the most we’ve tipped our toes into that world.

I remember hearing a Thrice song on Christian radio here in my city and thinking, well, that’s kind of interesting. Completely caught me off guard. But you’ve been able to tackle some big theological concepts and spiritual matters in a way that feels authentic, not like you’re sneaking up on someone.
I think not being part of a world that’s hard to understand for a lot of people has been helpful in fostering good communication, a conversation with people from different belief systems — or non-belief systems.

Up until a few months ago, you were leading worship at one of the campuses of Mars Hill Church (the church led by Pastor Mark Driscoll, who had a very public downfall over the last year). A church falling apart leaves a person more hurt than one might think, leading many, including myself, for a time, to turn away from faith. Has your faith been affected by all of the recent events? What does music ministry look like to you now?
We’re going to a smaller church in the town I’m living in. I serve every three or four weeks leading worship there. I took a pretty long break from it, but I just started back up in February. My faith — and this is not a judgment on anyone else — my faith wasn’t shaken at all.

I feel like I’m wrestling with these really ambiguous or amorphous feelings about… I don’t even know if it’s… It’s really about music in the church and serving in that way. It’s super hard to explain or even talk about. But that’s just starting to come on, now that I’m back into it.

I think a lot of it is me slowly processing my time (at Mars Hill) and some of the negative aspects of the culture that existed there. But in a larger sense, I love the “big C” Church and I love the “little c” church and clearly see that stuff is found wherever you are. But  I’m excited to be somewhere with more transparency that’s not quite as big of a machine.

I understand those struggles. I was leading worship at my old church and the culture of worship was so much more about being emotional and less about real connection. When we left that church and I started playing in our current community, I started to question why I was even doing it. Was I just fostering emotionalism or am I really trying to connect people with Jesus?
It’s interesting because, aside from any drama or dramatic situations, there are a million different ideas of what music in the church could or should be. And I find myself being, like, I just want to go to a church where there are no instruments and we just sing some hymns (laughs). Not that it’s right, but because it’s simple.

It’s great to see you’ve found a new community and are engaged. I’ve known too many people who’ve gone through church splits or things like that, not on as grand of a scale as you, and barely come out on the other side alive, let alone still believing in anything.
Yeah. I think anything that happens in a situation like that can be a good thing. Inevitably we see we’re putting our faith in the wrong things, and that can be clarifying.

There’s been a lot of excitement about Thrice teasing plans in 2015. I know you guys are playing some festivals and one-off shows, but are there any bigger plans? New music?
Right now we’re just focusing on playing some shows. But we’re really excited for that.

Is it nice to be back in the same room jamming with those guys?
We actually don’t have very much time to practice (laughs). So we’re getting it together at the last minute. It’s exciting, though.

Dustin Kensrue was posted on May 11, 2015 for HM Magazine and authored by Collin Simula.