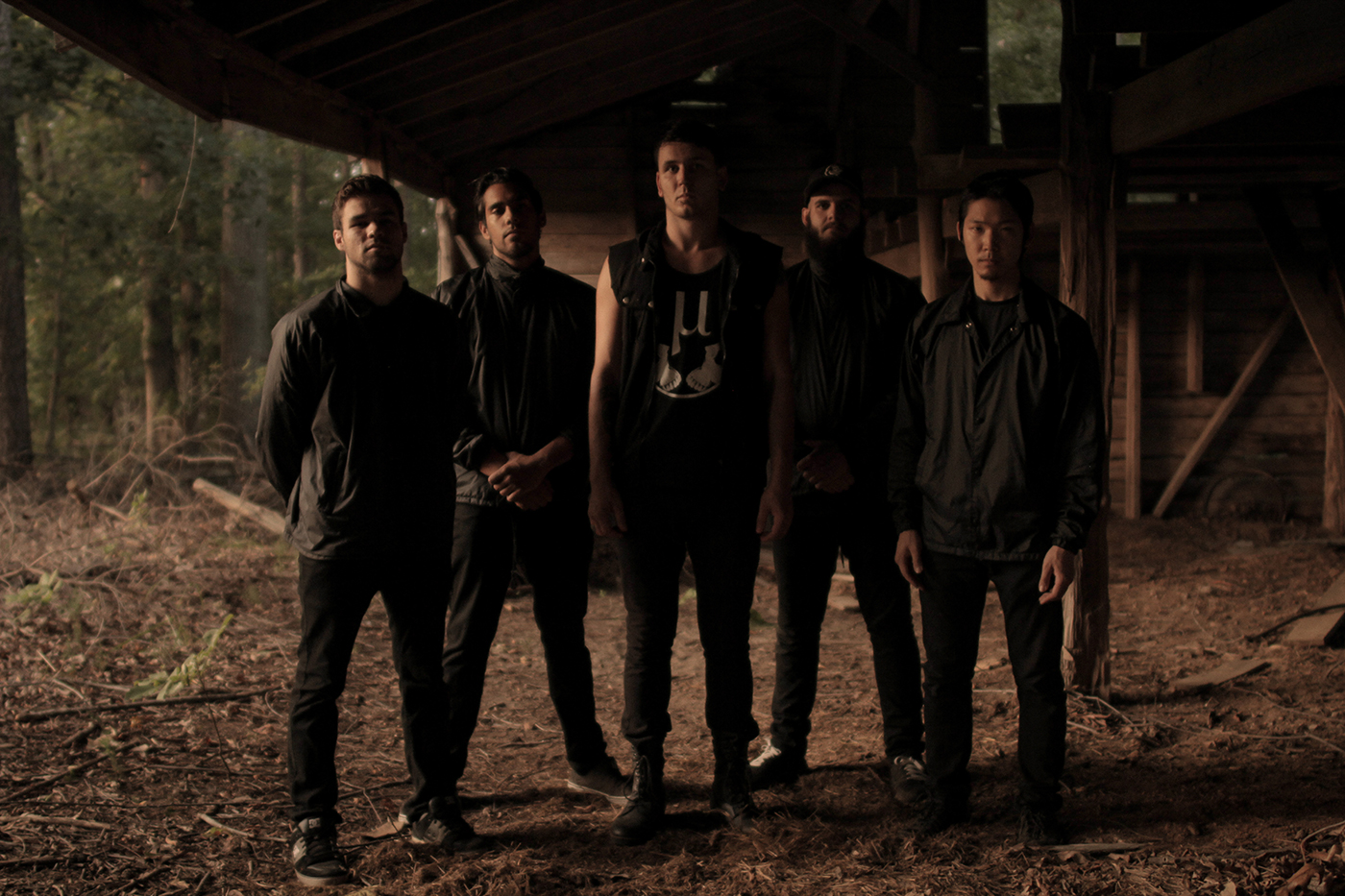 Blood on the Tracks

As Blood of the Martyrs releases their debut full-length, 'Completionist,' the BOTM train is crashing forward

By Hailey Ray
Photo by Efileno Arts and Media

This month could be the turning point in Blood of the Martyrs’ musical journey. The group’s new album, Completionist, debuted earlier this month alongside a new music video, while they set off on a hard month of touring.

Blood of the Martyrs first showed signs of life back in 2007 when Bobby Huotari and a few high school friends would get together for jam sessions. Back then, he played the drums. In 2008, Lee Zook joined the group on vocals and keyboard when they cut their first demo. The band’s lineup has continued to change over the years; Lee Zook has provided vocals and keyboard since he joined in 2008, even before the band’s first demo. Michael Pak now does drums, while Huotari plays bass and covers many of the band’s management duties. David Sanders and Jay Hathaway both play guitar.

While BOTM has existed in one form or another for the past six years, the members are still quite young with no one older than 25. This gives the band great potential for growth in albums to come, as they put more years of touring under their belts. To show this much promise this early, they could have a major impact in the next several years.

By April 2011, the band moved away from the demo world and released its first full-length album, Once More, With Feeling, through a small independent record label.

“It was more for online distribution; it was nothing serious,” Huotari said of the band’s work with the label.

They’re continuing the do-it-yourself approach with Completionist, although they did consider the traditional label route.

“We did shop the album around, and we did get some responses from labels,” he said. “But unfortunately, it wasn’t something we felt would directly benefit the band at the current time. We really talked it over, and we felt that going a DIY approach would really ensure the longevity of the band.”

Recording on their own with the help of a successfully funded Kickstarter allowed them to do everything on their own terms, with no contracts or future obligations to hinder them. BOTM was able to take charge of building their own foundation, rather than relying on a label or management to do it for them.

The vision for Completionist started in early 2012, when the band launched a Kickstarter campaign to fund an EP to allow them to continue touring. Sixty days later with 82 backers in tow, they surpassed their goal of $2,000 by almost a grand, and they decided to boost the project from EP to another full-length album. Nearly a year and a half after the close of the campaign, Completionist was finally released this month.

They joined It Lies Within for a one-month leg of their No Regrets Tour, taking them across the Eastern part of the country, down to Florida and up to Michigan with only two days off. They’ve also been touring almost constantly since Once More, With Feeling was released two years ago.

It’s a fitting work ethic for an album named Completionist, a term borrowed from video game culture for an individual who has to finish a game in totality, from collecting all of certain items to achieving every side quest or mission offered apart from the main storyline. “Completionist” also follows the underlying message of the album – finding your purpose, thereby “completing” yourself, in a way.

The guys have fun with their fans and don’t take themselves too seriously (one prize option on their Kickstarter campaign was having your name tattooed on a band member, and they also have a track named “Semper Fidelis Tyrannosaurus”), but they take the making of their music and their ministry very seriously. The name “Blood of the Martyrs” came up from leafing through a Bible hoping something stuck out, Huotari said. A quote from second-century Christian author Tertullian says, “The blood of the martyrs is the seed of the church.”

“Essentially, it’s saying that the sacrifice of the martyrs is what helps flourish or expand the kingdom of God,” Huorati said, “and that’s something that I definitely think is very fitting for what we’re trying to do and what we’re trying to accomplish with our message and our idea.”

Lyrically, the album loosely focuses on finding yourself, Huorati, who writes all the lyrics, said. “We just really want to present that idea and push that everyone has a meaning, and everyone has a purpose. Regardless of where you are, and your current situation, that is something we believe wholeheartedly that you are around for a purpose. It’s just a matter of finding out what that purpose is.”

He focuses on topics that he has dwelled on in the past. “I don’t like the idea of just writing on impulse,” he said. “I like to connect an idea, something that means a lot to me. Whether it’s an idea I’ve had, or an experience I’ve gone through, it’s something that I want to convey in the best way possible.”
Lyrical punch is definitely a strong point in many of BOTM’s songs. “Though as discouraged as I may be at times, I cannot deny my current position just feels right,” Zook growls out in “The Action Man.” The lyrics don’t shy away from the struggle so many feel with their faith and when coming to terms with their past.

BOTM isn’t shy about the members’ faith through the lyrics, but they also aren’t looking to push it on fans.

“We’re not necessarily as outspoken as some bands, like For Today or Sleeping Giant,” he said. “Obviously, the ministry aspect is the main importance, but we feel that a big way to minister is through our actions and the way we present ourselves at shows, the way we present ourselves around people.”
Visit them on Facebook or Twitter, and one of the first things you’ll see is a reference to their faith and ministry. Pay attention to the lyrics, and you’ll hear them crying out to God. But they also don’t see the stage as their time to preach outside the music. They’re trying to bring a positive presence to the hard music scene and be an approachable and relatable band for all their fans.

“We’re not above anyone,” Huorati said. “We’re just a bunch of average people, doing what we’re doing because we love it and feel compelled to do it. That’s an idea we really want to strive towards. Not really minister through standing on a stage and preaching, but showing people we’re relatable and that we’re just regular people like them having fun and playing music.”

The band’s maturation from Once More, With Feeling to Completionist is most visible when it comes to the balance of their sound, which has definitely become more of their own in the two years since their first full release.  The use of electronics and synthesizers is more controlled and polished, and Zook’s vocals have matured and been polished as well.

This may in part be from being recorded and produced by Jamie King, who has worked with For Today and Between the Buried and Me.

“Working with him was just an awesome experience. He’s just a really genuine, down-to-earth guy,” Huorati said. The band appreciated how King would present his opinions, but never impose them on the band. “He definitely has the intentions of the band and the finished product always on his mind.” “Swifty” is Huorati’s favorite track on the album, and the music video premiered the day the album released. “If there’s one song I would like anyone to hear from us lyrically, it’s that one. If it happens to be the last one that anyone hears by us, I’m perfectly fine by that. It’s one of the strongest on the album.”

The guys decided that, since they had spent so much time working to release the album, they needed to do something fun for their fans before the release. They recorded a cover of The Offspring song “Gone Away” and released it as a free download at the end of summer in appreciation of their fans’ patience. “We were just having fun. Just because of the delay of our album, we decided let’s record something and put it up for free download,” he said. The track was a huge success. “We like having fun quirky things to kind of lighten the mood. We don’t want to present ourselves as always too serious.”

Blood of the Martyrs is currently on tour.

Blood of the Martyrs was posted on October 7, 2013 for HM Magazine and authored by Hailey Ray.