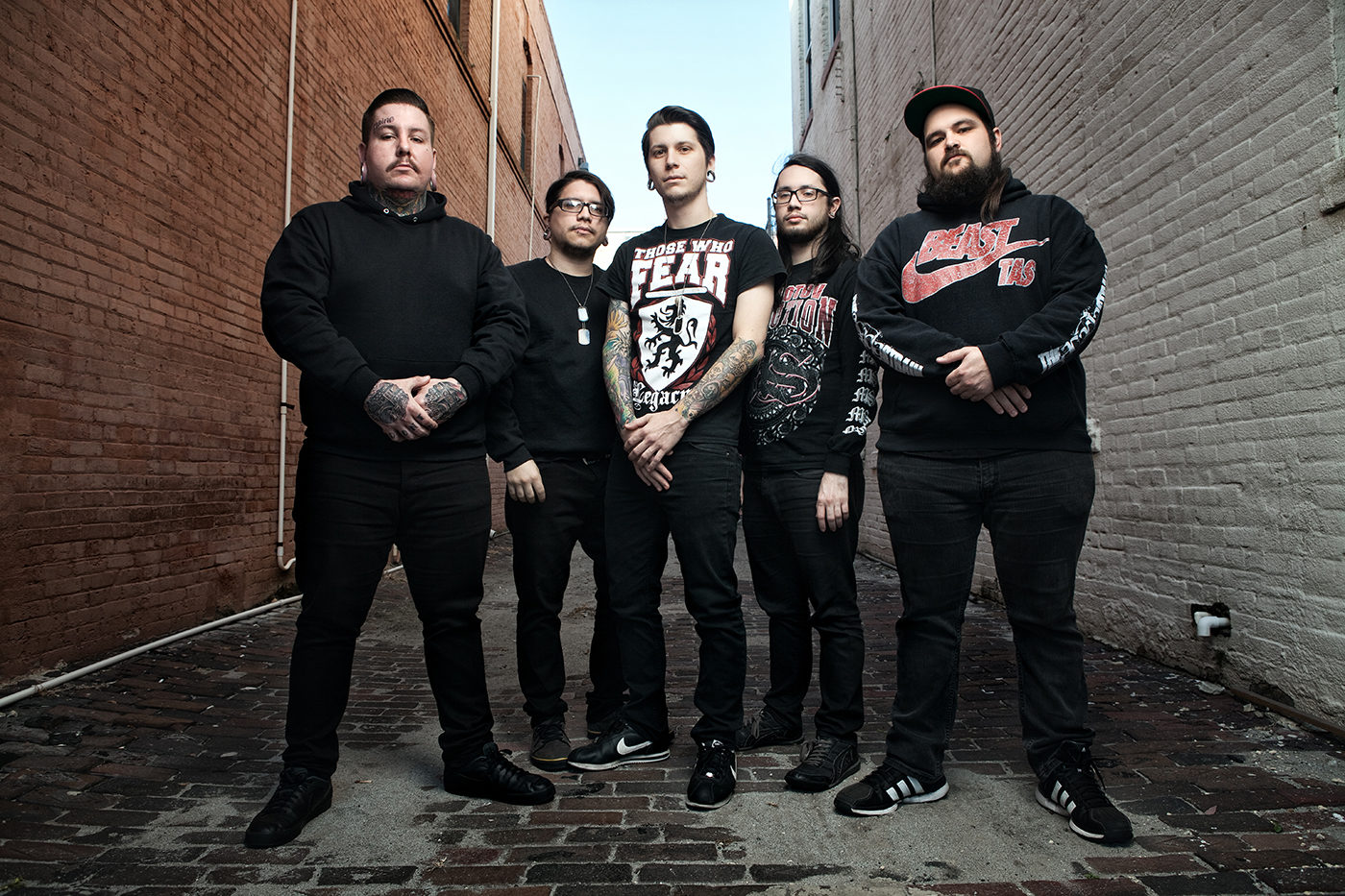 How did Beware the Neverending get to the point it’s at now?
Josh: Clark and I actually started the band about five or six years ago. We were actually in another band and toured through Valdosta — where we are now — which is where we met Josh and several other local bands in the area. Once we actually got started, we did a lot of touring and recording, trying to get on the road and get our name out there. Our drummer ended up moving on a little while later, and we ended up meeting Geo, our current drummer, and it’s just been touring as much as possible and working on putting out the new record since then

What groups helped inspire the brutal, technical sound you guys employ?
John: Personally, I am a big Deftones fan, as well as being into groove-based bands like The Acacia Strain and stuff like that, After I joined them around the release of The Next Level, I really dug what they were doing, but I also brought my own interests and styles to the group. I’m a heavy groove player, so I brought a lot of that rhythm to it, and between Josh and I, we would write a lot of parts together and then Geo would do his drum parts to where it would all just mix. Sometimes Josh would write the drum parts, or it could be Geo and I in the practice room together, and something would come to our heads and that would just be how it went.

What can we expect from Times of War and this batch of new material?
Josh: To us, the first two songs we had were definitely a slower heavy, which, primarily, is what the rest of the album will bring to the table. It’s going to be a lot of slow, heavy, groovy rhythms, but there is also going to be some blast beats and more technical, heavy moments as well. People are going to be pleasantly surprised at the variety the album has.

What was the process like in terms of recording? Was it similar or different to the process of recording your previous albums?
Bobby: It was definitely different, especially compared to Times of War. With The Next Level, though, we were still trying to get into the groove and get a lockdown of where we are now, whereas Times of War, we were already very sure on where we wanted to go and what we wanted to do. I think, on this one, now that we’ve found the right group of people, the writing has been a lot easier, and we dig the style of this one a lot more than the past pieces. Recording it at home certainly made it a lot easier as well — before we had to go nine hours out of our way and stay there to record — so recording it at home makes it a lot easier and more comfortable all around.

What was pre-production like with the opportunity to work from home rather than at the studio?
Josh: Most groups know they are going to have to travel a long distance to do all their actual recording, so they have to go into the studio with a lot of their pre-production already done. Since we got to do all our recording at home, it gave us the opportunity to work out ideas in much more detail. If we got stuck on an idea, we didn’t have to rush it, we just moved to a different song or idea for a while, and (it would) gave the original idea time to grow. So we were really able to let everything flow creatively; I don’t think any of these songs are rushed due to that now.

Looking back at this album now, what are you feeling toward your creation?
Bobby: I’d have to say this was my favorite album so far. I’ve written a lot of things so far, and this one stands out the most.
John: I think it was finally finding a group of guys I really felt comfortable with, like Geo. I think when you’re in a group, sometimes you really have to lose people to find the right ones, and finding him really helped bring us all together as a band.

Josh: This album, being our second album, we were not able to evolve just as a band, but also to grow and expand out, as well. This album has three of our best friends guest featuring. One of the singles we already put out actually has Dean Atkinson (With Blood Comes Cleansing), and he’s been one of the most influential people to this band. We also have Corey Bennet (Bermuda) and Jackson Greene (As Hell Retreats) on here, too, and they’ve been massive influences to Beware the Neverending from the beginning as well. So I’d say even though we’re getting lower and heavier now, our future is getting brighter for the fact that we found where we want to go.

Speaking of Dean, what was working with him on this record like, and how did that collaboration come to be?
Josh: Well, Georgia is very odd in the sense it doesn’t have conventional venues. We kind of have to make our own venues. For example, Savannah has a pizzeria most groups play out of. Well, about seven years ago, I started going to shows at places like this and it was in a disco hall that I first saw With Blood Comes Cleansing, and I would literally follow their van around Georgia to hear them play. Dean was huge to me during that point, and when I had first started listening to metal, he was the nicest guy I had ever met. Every time I met him, no matter what he was dealing with, he was so excited to see everyone. He remembered my name and remembered who I was six years later. So I called him and asked him if he’d do a guest spot, and he was like, “I’d be honored to.”

Who else is on Beware the Neverending’s wish list to have as a guest feature?
Josh: I’d have to say Chad from Legend. I’d love to hear his voice on a CD with us. I’d love to have the guys from Bury Your Dead; they just have very recognizable voices. Also, I know they probably wouldn’t because of the genre differences, but Lajon from Sevendust would also be really cool.

Josh: Chino (Moreno) from Deftones — that would be amazing. Also, Vincent from The Acacia Strain and Nick from Molotov Solution.

What plans do you guys have for touring to support the album this time around?
Josh: Well, we have one headliner planned in March for the CD release. We also have a support tour as well, and between those two tours, we plan on being out on the road for at least 40 days. That’ll be a good starting push for the album, but we also know we have no intentions of stopping there.

We talked about your feature wish list, but who’s on your touring bucket list?
John: We really want to do a longer tour with Those Who Fear. We’d like to do a tour with Molotov Solution if they get back together, Impending Doom, Sleeping Giant, Oceano and some heavier groups we can try to be a support to. Also, A Plea for Purging, if they ever get back together again, would be great.

Speaking of touring, what’s in your personal tour survival kit?
John: Since I’m like the tour dad, I bring a full toolbox for the van. If we go out for two weeks, I pack for two months, so I’ll have things like baby wipes; shampoo; conditioner; a bunch of vitamins because I’m getting to be 30, so I’m getting to be an old man; and really good toilet paper (laughs).

Bobby: The biggest, most inconveniently placed blanket in the world, a couple jackets, a Japanese flag, no deodorant because I never use it and a personal comb because everyone always steals mine.

Clark: I only need two things man: my laptop and my external hard drive.

Geo: Clothes and shoes, since you can’t be naked; shampoo; baby wipes; and at least a 24-pack of water to wash my hair in the parking lot.
Josh: All I really bring are my clothes and my hats. Oh, and a can of Febreeze — every member in the band has to bring at least one can of Febreeze.

To end on a more serious note: If you had to describe Beware the Neverending as a whole, how you go about doing that?
John: The word heavy, when you talk about music, isn’t actually describing the music; it’s describing the feeling the music makes you feel. No one in this group hasn’t had to deal with a personal struggle, so this music allows us to get those emotions out by playing a heavy sound and giving us a vent for the things we go through that we wouldn’t be able to get out any other way. This band isn’t just an outlet for us to go out and play music, but for us to play the heaviest, lowest music that can reach people — if not by our music, then by us as people — because besides music, one thing we love to do is talk, and we talk a lot.

Beware the Neverending was posted on April 5, 2014 for HM Magazine and authored by Justin Croteau.