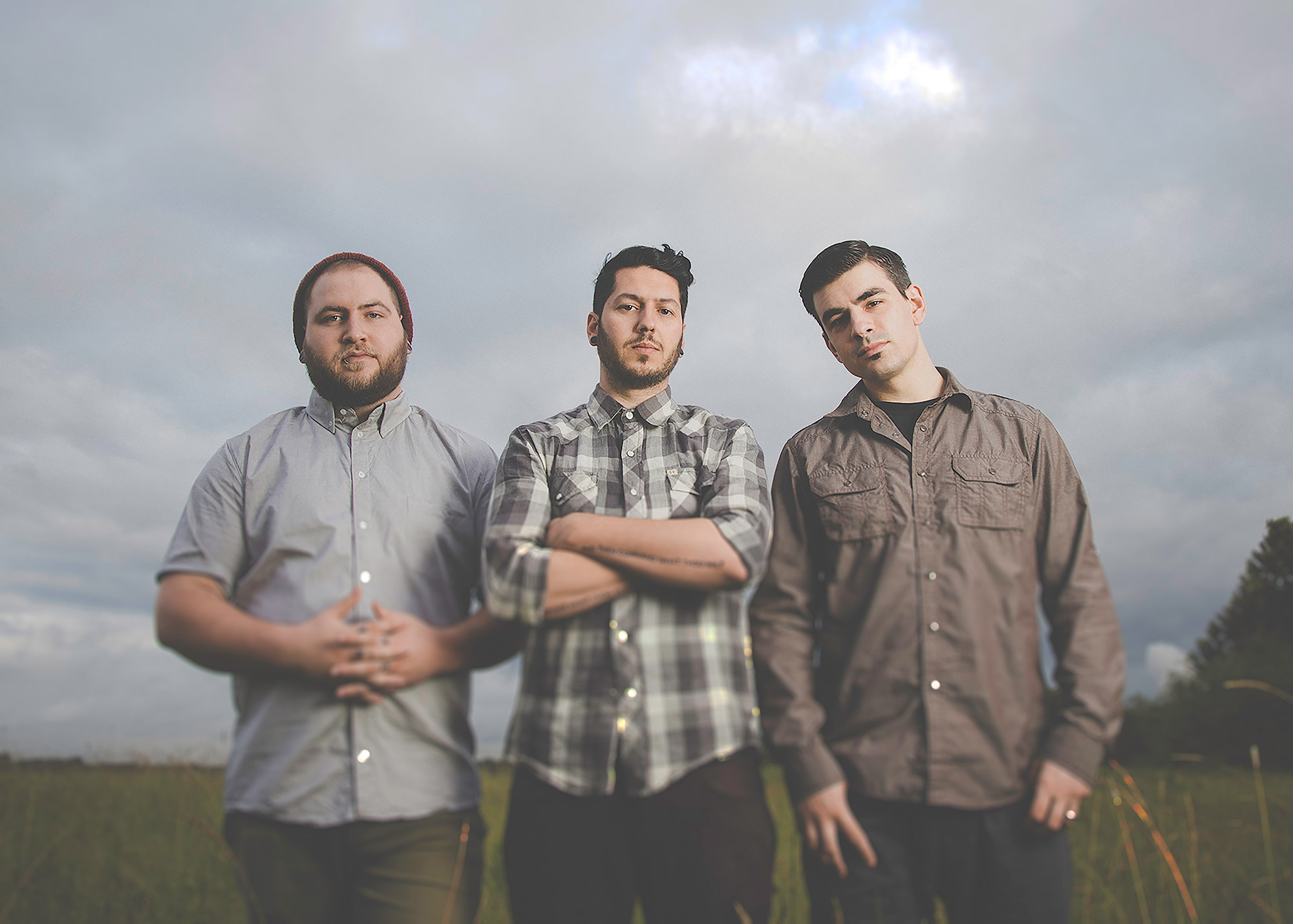 'I think that’s the beautiful thing about hip-hop is that it’s such a multifaceted means of communication, and so I think that there are not these compartments of the genre, but I think it allows for us to tackle many different parts of it.'

Beautiful Eulogy, a three-piece hip-hop group from Portland, Ore., recently released a new album, Instruments of Mercy. The three artists that make up the trio – Courtland Urbano, Thomas Terry (AKA Odd Thomas) and Bryan Winchester (AKA Braille) – sat down with Humble Beast for an exclusive interview and collaboration with HM Magazine.

Humble Beast: Courtland, what was it like, maybe trying to make something in the same vein as your previous record, Satellite Kite, but something different?
Courtland Urbano: Well, I think it was naturally built off Satellite Kite. I think we already had a sound established from that record, and that record being the experimental process of finding who we were as a group and working that chemistry out. Then, Instruments of Mercy, I think being a more matured record of that sound, and so we just kind of didn’t want to stray away from it too much at all and really just build upon what we’ve already started, but (we wanted to) challenge ourselves in different ways.

Like using all analog stuff for the production side of things and actually laying more instruments on this album, and running them through effects, and trying new…just experimental ways of making some sounds, and stuff like that, and I think it was definitely a process. We definitely changed songs more than a couple times to make it work with the content, and I think the end goal for the production is always to just complement what’s being said, and to give a platform for the lyrics, and so that’s our aim, then that’s what we’ll continue to strive for as we make another album, potentially.

Bryan, how would you say that this album, Instruments of Mercy, is similar or different to Satellite Kite?
Bryan Winchester: I think that as emcees, and as vocalists, we felt more comfortable approaching the tracks, each in a unique way. I think in Satellite Kite, there was this feeling through process of, “OK, what do we all sound like together?” In Instruments of Mercy, I think we were more comfortable in our roles, so everyone just took responsibility for the things that they had to do in terms of Thomas and I writing our verses and fine-tuning them.

I think that the vocal performances, we were just more comfortable, and I think the vocal recordings, we had a better sound. I think that was different. I think conceptually, this album was difficult because Instruments of Mercy is such a creative, multilayered concept, so taking these song titles with wordplay and multiple meetings, and then trying to form a verse that has a clear train of thought, and two verses that relate to one another, I think that was probably the most challenging part of writing this album.

But through that, I think it created songs that are really unique to this record. I don’t think we’ll make any songs that sound exactly like these or address things in the same kind of ways, and so it really opened up the palette of topics that we were able to talk about. But yeah, other than that, a lot of other things though, it was very similar in terms of just finding that when you try and just bust out a verse really quick with the kind of music we make, it doesn’t work.

It’s necessary for us to take time to study. It’s necessary for us to be enjoying God as we try and put God on display, so that the songs would be authentic. It would be very inauthentic to try and come up with a bunch of clever raps about God, but you’ve been distant and disconnected from God yourself personally, and so in that sense, it’s much like preparing for a sermon or preparing for a devotion, and so that’s similar to Satellite Kite. I just think that we were more refined in our approach.

But there was a lot of fun we were able to have on Satellite Kite as well. There wasn’t maybe as much … We didn’t feel as much pressure. I don’t think we needed to feel pressure on this album, but we did feel pressure in many times in making Instruments of Mercy, which caused us to have to step back and just enjoy the process again. Enjoy that God we’re worshipping and enjoy our fellowship with one another as we create music, and I think when we do that we get our best results.

Thomas, in your role in approaching writing a verse and content for this album, what does that look like when you’re sitting down to write a verse for one of the tracks on this album?
Thomas Terry: Yeah, well I think first and foremost, we kind of find concepts that already resonate with us, or we find concepts that might be helpful, and so the first part of the process is coming up with a concept, and then I think what we do is we just inundate ourselves with information about the concept. We pray about the concept, we begin seeking out resources that might inform our thinking about the concept. We look to the scriptures to see what the scriptures have to say about the concept and then basically just meditate on it and allow for the ideas around that concept to permeate as a whole in our life and then begin to just pour out whatever comes out.

A lot of research, a lot of studying, a lot of allowing the concept to invade us experientially so that when we are communicating it comes not just from the head, but also from the heart.

Let’s say somebody has never heard of Beautiful Eulogy, how would you describe the sound? What is Beautiful Eulogy, and what should someone who’s never heard of you guys expect when they listen to your music?
Terry: I definitely think if you’ve never heard of us before, and all you knew is that we were maybe a hip-hop crew, it might be confusing in terms of what to expect from us, because we probably have more in common with a worship band than we do with a rap crew. Our primary task as a group is to put God on display, to make him known, to make the gospel known, to worship him for who he is and how he’s revealed himself through his word and in Jesus Christ. That’s our goal, and then how we accomplish that musically varies from song to song, but our influences do include hip-hop, but are not limited to hip-hop.

We take many different musical influences and create music that could fit within the hip-hop genre due to the fact that it has beats, and it has rhyming, but I think that it also touches on the borders and edges of many other genres, and I’ll let Courtland maybe talk about that a little more.

Urbano: Yeah, in terms of the actual foundation of the music and it’s sonic components, I would say that it definitely has the firm foundation of hip-hop in its classic roots, but is advanced in the sense of using more electronic as to production, along with more melodic elements of folk music or alternative singer-songwriter type stuff, so it’s a big collaboration of a lot of usable genres and kind of a melting pot sonically. But that’s then put in a hip-hop context, in having lyrics that are very…yeah, very well-written, and rhyme schemed, and all that stuff put together.

Winchester: Yeah, I think we want to write in such a way where these truths can be put on display across all genres. I think we would want to consider ourselves like neo hymn writers.

Unpack that a little bit, neo hymn writers?
Winchester: Well, we find an incredible amount of theology in hymns. We find hymns communicate amazing worship of God, hymns communicate truths about God, and so we want to do the same thing, but just do it in a way that’s more contemporary or more palatable for our kind of urbanized context.

What role can hip-hop play in a Christian’s life, in a church’s life? Is it just music? Is it hip hop for just the sake of hip-hop music, or can it be worshipful?
Bryan: Yeah, I think it’s multifaceted. I think you can listen to it and just enjoy it for its aesthetic appeal, but I think that simultaneously you can listen to it and be encouraged. You can be edified, you can be challenged, it can serve as a worldview trainer. It can serve as a guide to point people back to scripture and point people to Jesus Christ.

I think that’s the beautiful thing about hip-hop is that it’s such a multifaceted means of communication, and so I think that there are not these compartments of the genre, but I think it allows for us to tackle many different parts of it.

So you spent a year working on this, and then you get ready to release it, and you give it all away for free. Are you crazy? People always scratch their head at that, that we give all of our music away for free on the website. What’s the underlying idea? Why do you do that — pour so much time and effort into a project, only to turn around and just give it away for free?
Urbano: The gospel (pause). The gospel.

We just want to bless people, because ultimately, we love people, we want to see them grow in godliness, and we hope that what we create serves as a medium to do that, and so that’s why we want to give it away. We want the most amount of impact and the greatest return.

Beautiful Eulogy was posted on December 9, 2013 for HM Magazine and authored by Humble Beast.