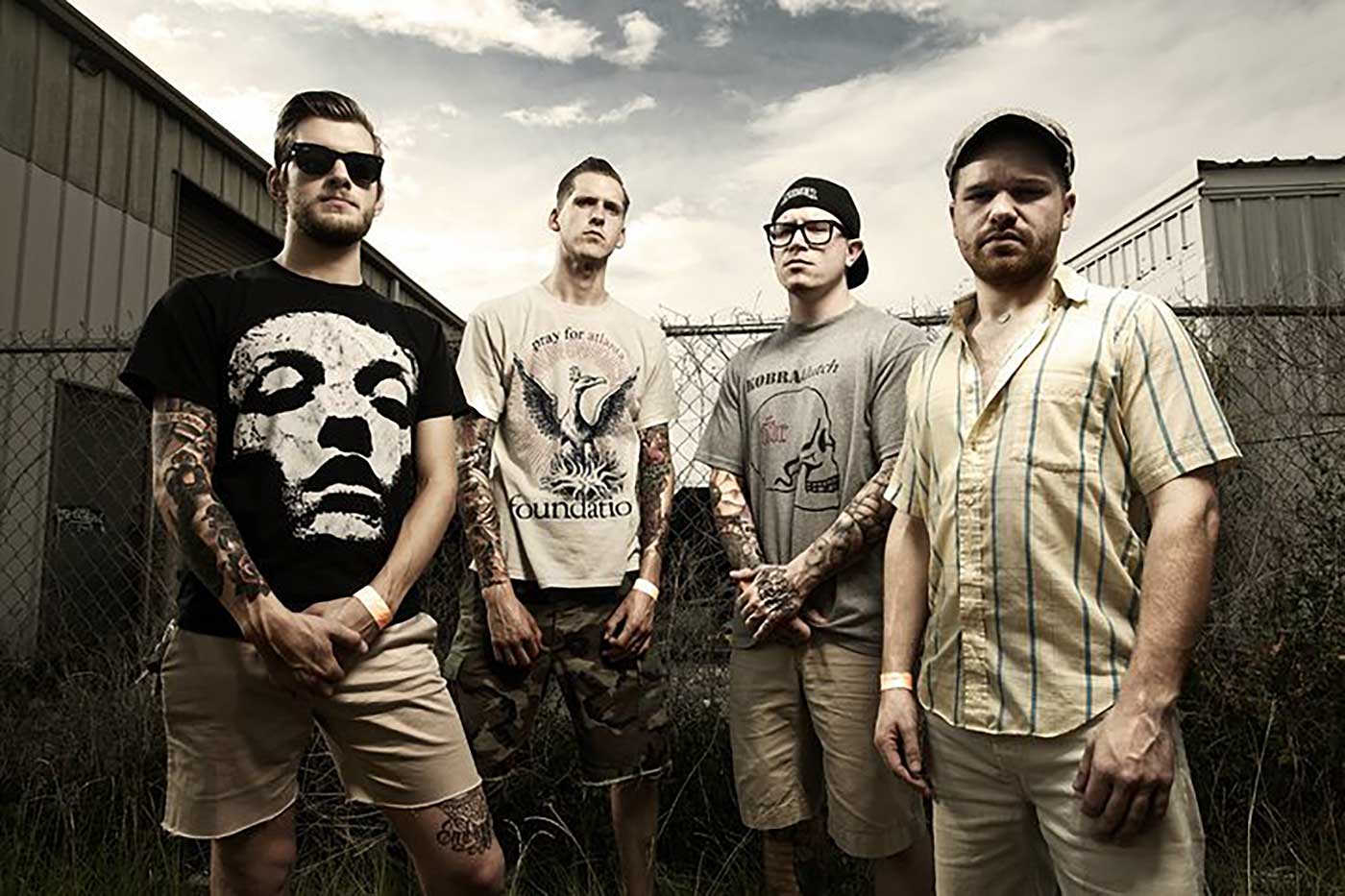 The Problem of Pain

North Carolina hardcore act Advent returns with ‘Pain and Suffering,’ the band’s first release in over seven years. Vocalist Joe Musten talks to HM about the comeback EP amid the wonder of life, the awe of death, and the inevitable anguish that shapes the interval

“Try to exclude the possibility of suffering which the order of nature and the existence of free wills involve, and you find that you have excluded life itself.” — C. S. Lewis, The Problem of Pain

It’s early spring in the Triad of North Carolina. Joe Musten is calling from the hospital, where his wife has just given birth to the couple’s first children — twins, a boy and a girl. (“It’s pretty crazy,” he said. “These are our first two. They’re doing great!”) Musten, 34, the vocalist of recently-reunited NC hardcore band Advent, is on the line to talk to HM about the group’s latest offering, a brutal 4-song EP called Pain and Suffering.

Given the joyous atmosphere of the frontman’s current circumstances, a chat about life’s pain and suffering — the philosophical fuel for Advent’s first new music in nearly a decade — seems a little out of place. But, like the succession of entropy enforced by existence, the dialogue is unavoidable. There’s no Pain and Suffering without agony’s blind justice, and, likewise, no Advent — at least, not as we know it.

The band broke up in 2011 after two albums on Solid State Records, Remove the Earth (2008) and Naked and Cold (2009). Advent — Musten, bassist Johnny Smrdel, guitarist Mike Rich, and drummer Jordan McGee — had been banging around the hardcore scene since 2005, its lineage tracing back to Musten and Smrdel’s previous project, Beloved, another 2000s-era East Coast HXC staple. 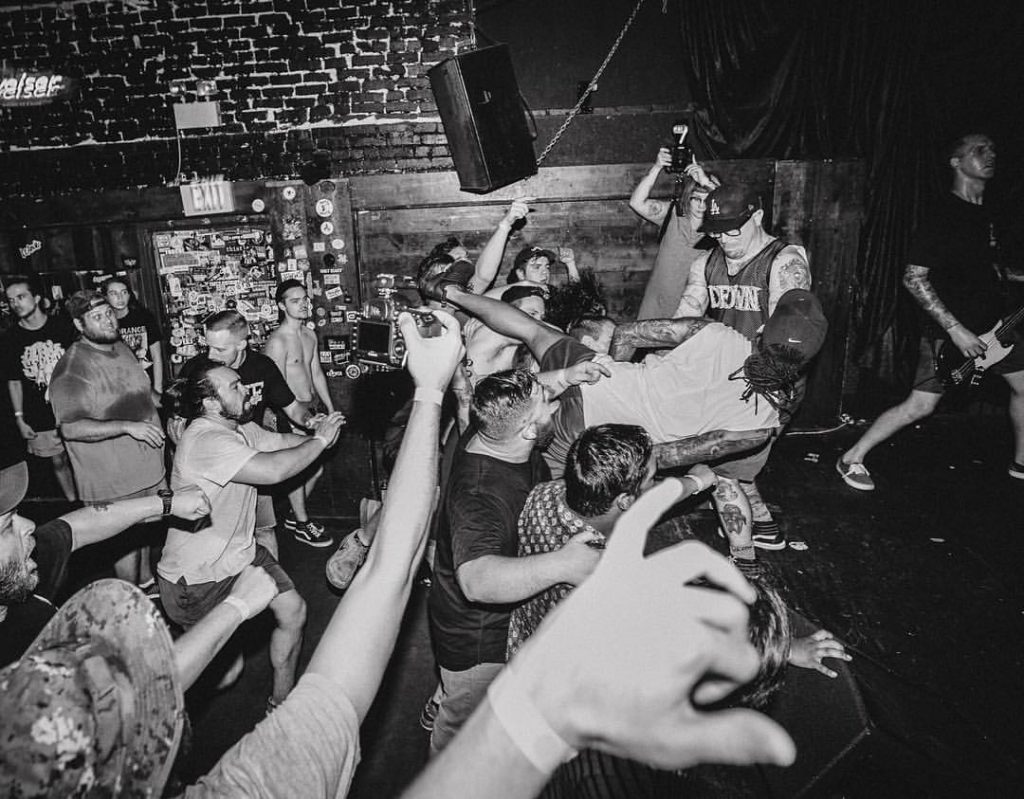 Before the quartet initially called it a day, Musten joined The Almost, a popular band featuring Underoath drummer and vocalist Aaron Gillespie. Smrdel went into the garment industry. “In 2011, I was playing drums full-time with The Almost,” Musten said, “and Johnny was opening up a clothing store. Everything just became debilitating to Advent’s schedule. Johnny told us that he didn’t want Advent to suffer in the wake of all that, and I didn’t want to do the band without him.”

The group announced their split and embarked on a farewell tour that summer. Musten stops short of saying he regrets Advent’s breakup, but admits that hindsight offers a clearer understanding of the band’s would-be conclusion. “It’s always easy to feel a certain way one day and then be humbled the next,” he said. “Not necessarily that you’ve changed your mind, but that maybe you were a little confused when you made your first decision.

“We’d hear from people all the time, ‘When is Advent playing again?'” Musten continued. “It’s like, ‘Man, we broke up.'” The band’s underground esteem thrived during its downtime, reunion requests a constant reminder. “Throughout the years, we’d always hear from kids wanting us to play again. But we all kept in touch and eventually decided we just wanted to do it. If even one of those kids that wanted us to play again comes to a show, it’s worth it to us.”

“It’s always easy to feel a certain way one day and then be humbled the next. Not necessarily that you’ve changed your mind, but that maybe you were a little confused when you made your first decision.”

As Advent’s return inched closer toward reality, tragedy struck Musten’s family life in a defining way. “Probably somewhere in 2014, we got to the point where we all agreed that it was gonna happen,” Musten recalls of the band’s comeback plans. “But then my dad passed away and everything just kind of clicked. It just made sense to me to pursue this, for some reason. Everybody agreed that there was no better time than now.”

Musten’s father died suddenly of a heart attack at 64. “Very healthy person, active lifestyle,” the musician said of his dad. “Three days before he passed away, the last conversation I ever had with him was on the phone, and he was about to go work out. I was like, ‘Dad, I don’t think I’ve ever told you this, but I’m really proud you’ve taken such good care of yourself.’ That’s not a conversation I’d ever had before. There were thousands of moments that I can remember my dad telling me that he was proud of me, but I had never told my dad I was proud of him before.”

The pain of his dad’s death rung an ominous bell in the Advent vocalist’s mind. Musten’s grandfather, his father’s father, also died from a heart attack at about the same age many years prior. The hereditary sequence of events is not lost on Musten, who nearly anticipates the same fate for himself. However, he places future suffering in the hands of a higher power.

“My father’s death weighed really heavily on me. And it’s kind of weird when I think about those last few days, what they meant.” Musten, who works at a church, sought to process the death from a faith-based perspective. “We see pain and suffering as a bad thing – and it is – but to the believer, it can be something different. If you’re willing to meet God in the place of your pain, completely authentic in the moment, living in your suffering, it’s probably gonna be the strongest encounter you’ve ever had in your life.” 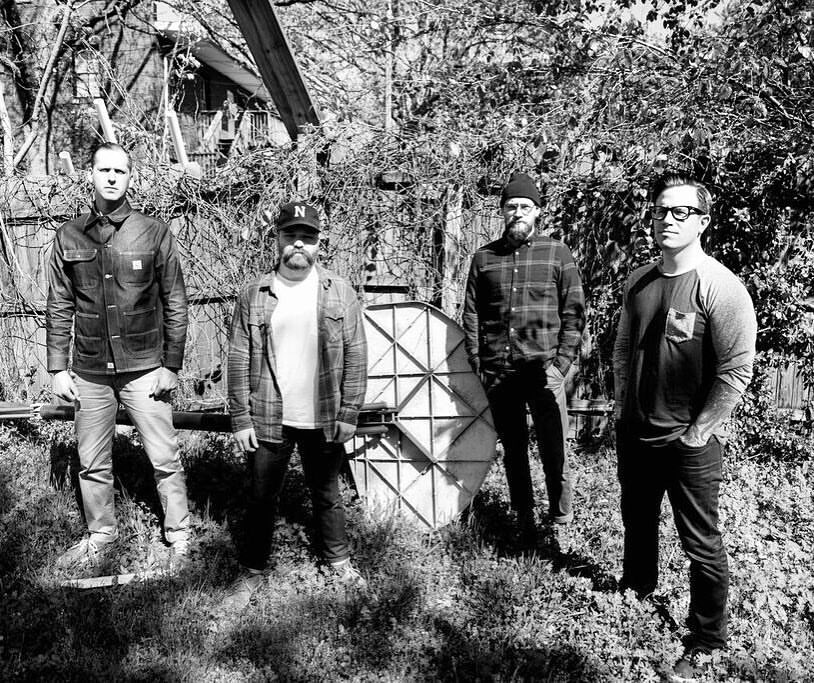 Emerging from that grief, Advent began writing new material in 2015. Although half of the band now live elsewhere in the country, the sonic force of Advent still emits the same power when the four assemble. “Mike lives in Portland, Jordan lives in Nashville,” Musten said. “We’ll fly Mike out, just get in a room, and let it flow.” The band tracked Pain and Suffering in 2016 with Kris Hilbert at his recording studio, Legitimate Business, in Greensboro, North Carolina.

Once the four blistering tracks that comprise the EP were completed, Advent essentially became the object of an underground record label bidding war, with numerous hardcore imprints vying to release the effort. Musten and crew chose Bridge Nine Records as their partner for the EP, with the frontman giving a special nod to the agreement’s one-off nature. “They approached us with a super awesome deal,” Musten said of Bridge 9. “I would be more than happy to work with them again. They’ve just been stellar — it’s been nothing but a blessing.”

The record came out in January, and the band had its first shows back together preceding the release. They’ve since played a handful of festivals and regional dates, barring a full-scale touring schedule due to family responsibilities. “Johnny’s got two kids, now I’ve got two kids,” Musten said. “We’re all nearly 30 or mid-30s. We’re just gonna go do it while we can, do it to the best of our ability, play the shows that make sense and that the kids are gonna come to. We’re not gonna hit the road for a couple weeks at a time, but we’ll still be out there.”

At Florida’s FYA Fest in January, Musten introduced Advent’s performance of Pain and Suffering’s “Weight of the World” by openly addressing the recent hardships he’s faced. “2016 was a sh-tty year, and I’m not quite over it,” he told the audience. “Getting over the death of my father has been the hardest thing I’ve ever gone through. Sitting on the floor with his dead body looking lifeless back into my eyes changed my life forever. About 36 years (ago), my paw-paw — as we call him in North Carolina — died on a stage just like this of a massive heart attack, so I’m gonna try and recreate the same thing for you guys tonight.” Musten didn’t die on stage that night.

Pain and Suffering’s “Shadow of Death” deals directly with the passing of Musten’s father, probing the possibility of an afterlife when the Advent vocalist asks, “What will await me? / Will I see my father, my family?” Musten admitted he’s almost certain he’ll see his dad again: “Yeah, I mean, sometimes I am,” he said. “I’d say about 98 percent of the time, I am. Then there’s those times when I’m like, ‘Man, I hope that wasn’t the last time I said goodbye to my dad.’ I don’t know. That’s just an honest human feeling.

“It’d be shallow to think that none of us struggle with that,” Musten said of his self-described two-percent margin of doubt. “There’s a lot that I’m so certain about, a lot of things I’ve seen that are absolute, 100-percent evidence of God working in my life. You know, when you’re sitting on the floor with your dad and he’s gone, you just have these thoughts in your head. Like, I really hope that I see him again, I do. I know that sounds selfish, but I know that God says I’m going to. I hope that’s not just some words written in a book. At the end of day, what prevails is God’s presence.”

The musician knows that life is short and death comes hunting. Pain and suffering lurk around almost every corner. But, for right now, it’s spring in North Carolina and babies are being born. Advent is out playing shows again and delivering their fierce brand of hardcore to those who will listen. “We’re super thankful for any of it,” concluded Musten. “That’s the truth.”

Advent was posted on September 4, 2017 for HM Magazine and authored by Philip Trapp.