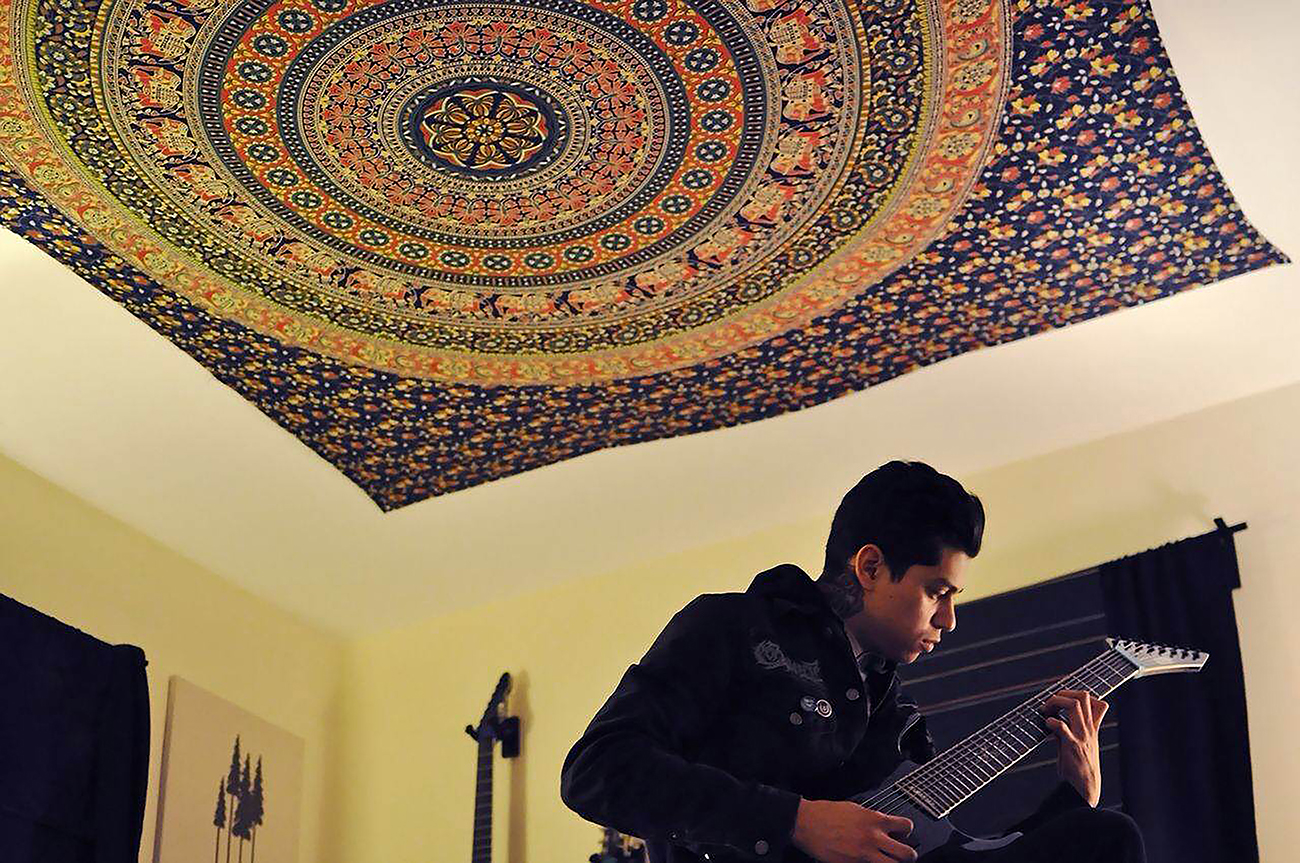 In the Absence of Fear

In the Absence of Fear

Founding member and guitarist for Impending Doom, Manny Contreras, has found his inner self

You might know Manny Contreras as one of the guitarists and founding members of Riverside, California deathcore band Impending Doom, but you might be surprised to know he enjoys music outside of that sound. Like his coworkers at his day job, he has very eclectic taste in music, talented enough to write top-notch music of any style or genre.

Last year, he started posting instrumental songs online in a category he dubbed “sleep music.” Ironically enough, these songs initially came out of not being able to sleep while in the studio recording Death Will Reign, the most recent album from Impending Doom. Under the moniker In the Absence of Fear, Contreras has a new outlet for his talent and sleepless nights.

Like any true musician, Contreras never stops writing. “I constantly create music,” he says. “It’s just what I do. It’s how I express myself. It feels like a piece of me.” You can tell it’s a part of him. Having known him, I’ve come to see him as a very well-rounded musician. “If it’s metal that I listen to, it’s probably the smallest band that no one cares about or a band that no longer exists,” Contreras says. “Those are the best bands to me. For instance, I’ve been on a Candiria kick for the longest time,” he says. “I do listen to a lot of Earth, Isis and bands like that. And I’ve been listening to Andrés Segovia, along with some French Jazz.”

I asked him what inspired this project, where these songs came from. “I wrote the first four songs I put out to help people sleep at night. I wrote all four in seven days, and I only wrote them at night,” he says. “You can really feel it. You can feel sometime, as opposed to just distorted patterns where you can’t really distinguish what’s going on in the music as much.”

Though he always has a full plate, Contreras is more than happy to make time for In the Absence of Fear. Even the idea of putting out a full-length album, if anyone is interested. “As of now, I do everything day-by-day. If an opportunity comes where someone wants to release a full-length, I can do it tomorrow,” he says. “It’s just another worry for tomorrow as far as today goes. I’m pretty stuck that I’m even giving an interview right now.”

We’re at his mercy as to when he feels ready to show us what he has up his sleeve.

As much as Contreras writes, he always has more songs bouncing around in his head he’s ready to record when the moment strikes. “I have probably 10 or 15 songs that are already written. I have a drummer ready to go. I have a bass player as well, and there’s this violinist that I know, and I know she’s been wanting to start jamming with me, too. I told her about it. She was really intrigued by the idea. Very interested. It’s just taking the time to get everyone together to finally create it. I can’t wait to finally do that. Once we do that, only then will we finally know when we’re going to actually put something out.”

I wondered how Contreras was going to make it happen. Would he go with crowd funding? Would he hold out to see if any labels are interested in the project? “I want to work with someone who cares,” he answers, “I don’t want to be like a ‘smoke in the air’ thing with a label. I’ve done that too many times with a bunch of different bands. It’s all overwhelming. If someone is as interested in the music as I am — and they’d have to be into something new, something to really connect with — and enjoys it as much as I do, then I’d love to work with that label.”

As an artist, it’s really hard to find someone as passionate as you to release your music. Generally, the label doesn’t care as much and it’s more about how much money both parties are going to make, and Contreras understands this. These songs are full of his deep, introspective personality, and he sums it up perfectly: “I’ll always be writing metal, but as far as my self-expression, this is really me. In the Absence of Fear is me. It is an honest expression of myself. It’s my soul.”

In the Absence of Fear was posted on April 4, 2014 for HM Magazine and authored by Rob Houston.