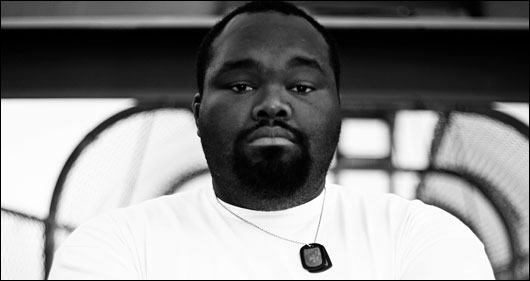 Last week on Facebook I read a post from Facedown Records that Bloodlined Calligraphy bassist Eric Cargile died Tuesday in his sleep at the age of 30. The band posted this on their myspace. “We have lost our brother, our best friend, and things will never be close (to) the same without him. Eric was the heart of this band and we have so many amazing memories of and with him.”

Bloodlined Calligraphy left Facedown in 2007. Right before they left the label I saw Eric at Facedown Fest in Pomona, California.  I stayed with them at their California host home. That week was the first time I ever wrote for HM. So when I read that Eric died it really hit me and I knew I had to write this in memory of all he has done with Bloodlined Calligraphy.

In 2009 after a long wait Bloodlined Calligraphy signed a new deal with up and coming label Sancrosanct Records. According to their blogs on myspace they started recording their self-titled record for Sancrosanct Records April 13th. There is no news on when the record will be done or released. Seeing the death of a key member it could be a while.

Other Good news for fans, Bloodlined Calligraphy will be playing a few sets at Cornerstone this summer. It has been three an half years since they have played. But it will not be the same without Eric.

For the full official statement on Eric and updates on the new record and shows go to their myspace: http://www.myspace.com/bloodlinedcalligraphy