Light for the Lost Boy 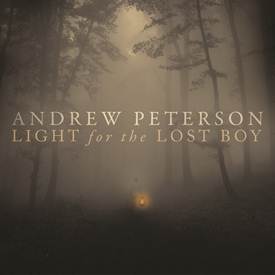 The long awaited Light for the Lost Boy fall tour with Andrew Peterson and full band, featuring opening act Caleb, will launch in Nashville, TN on September 21st  and will end in Birmingham, AL October 24th.   Opening night will be the album release party for Peterson’s new project, Light for the Lost Boy, and will be in conjunction with the third annual Rabbit Room conference, Hutchmoot, an event which sold out in seven minutes. The remaining tickets, however, are open to the public and are available atwww.rabbitroom.com.  Tickets for the entire tour are available at each venue and more information is available atwww.andrew-peterson.com.

Peterson hitting the road with a full band will be a treat for audiences, as he usually performs his shows acoustically with long-time bandmates and writing partners Ben Shive and Andy Gullahorn. For this tour they’ll be joined by the three members of the opening act, Caleb.

“Much like the Behold the Lamb of God record,” Peterson said, “these songs seem to want more instrumentation than just me and a guitar. While we were recording the album I kept asking myself how Ben, Andy, and I were going to perform the songs live—then when the guys in CALEB agreed to do the tour I got really excited. They’re a great band. I can’t wait for folks to hear their songs—and I can’t wait to play my songs with them.”

He met the group while on tour with Steven Curtis Chapman last fall and then again this past spring.  Caleb is comprised of two of Chapman’s sons, Caleb (lead vocals/guitar) and Will (drums), along with Scott Mills (guitar/vocal/keys/bass).  Peterson became a big fan of their music and even had Will Chapman play drums on Light for the Lost Boy.