Switchfoot’s “Always” from Hello Hurricane is a hit on The Late Late Show with Craig Ferguson.

In case you didn’t catch it on air the other night, here it is:
http://www.youtube.com/user/Malinky2Stoatir#p/a/u/1/3Fv44A0AAZk 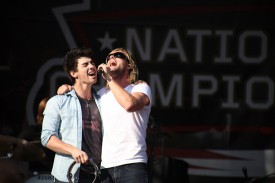 Switchfoot played during the ESPN National Championship Tailgate at the Rose Bowl Stadium just before the Alabama Crimson Tide took the trophy, beating the Texas Longhorns in the Citi BCS National Championship Game on January 7. Playing “Mess Of Me” and other favorites from its acclaimed, Billboard 200 Top 15 best seller Hello Hurricane, the band also performed its megahit “Dare You To Move.” Switchfoot frontman Jon Foreman (right) is joined by Joe Jonas (Jonas Brothers) to sing the song. Check out a clip of the performance at http://www.youtube.com/watch?v=spSZDgBQBlk.

One of the most difficult things for the human spirit to embrace when feeling broken is vulnerability with those we trust and sometimes even with ourselves. Glass Houses vocalist and lyricist Josh Haider is working to change that.

Full Feature More from Of Virtue