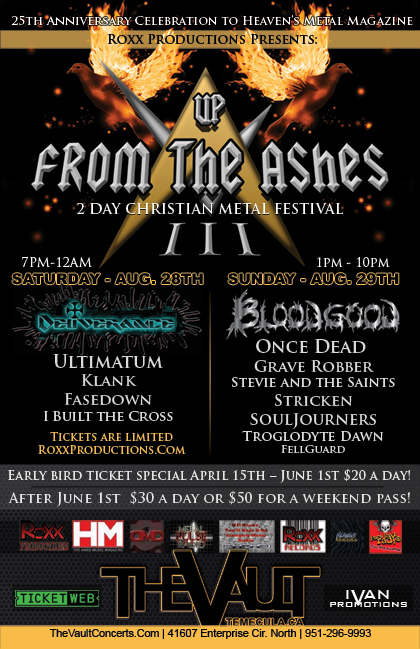 The year was 1985, the Metal scene was alive and thriving, many magazines and fanzines were popping up to cover the latest and greatest in the metal scene. Magazines like Metal Edge and Spin would rise to the top of the rock and metal scenes in covering the hard rock and metal scene and excel at it for many years. But only one magazine would rise to the occasion of exclusively covering the Christian hard rock and metal scene. One magazine that 25 years later is still alive and thriving today, ‘in a print format’, which is a huge accomplishment, amidst the many ongoing changes in the ways we promote music to the world today!

August 28th and 29th at the Vault in Temecula California, Limited tickets are available for this very special once in a life time event! Join us as we celebrate the Anniversaries of some of the most influential artists in the Christian Metal and Hard Rock Scene and one of the longest running print rock magazines in the industry, Heaven’s Metal!

For full details and ticket information visit http://www.tvsomata.com/thevault/ or www.roxxproductions.com

Also be sure and check out the Official UFTA3 My Space for up to the minute news and updates!  http://www.myspace.com/ufta30810

HELP PROMOTE
Help us promote, promote, promote!
This is sure to sell out in this intimate venue, so help us spread the word and let’s make sure we get all the true fans in the door! Or below here is the html code you can use to link everyone straight to the ticket page!